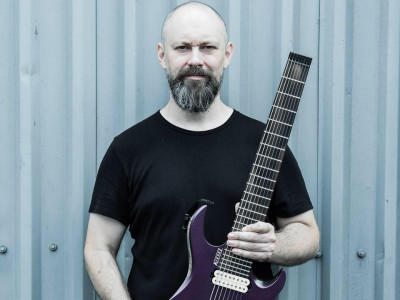 I’m a fan of progressive music and I’ve never stopped being a fan of it, and I think that’s the same for everybody. Once you’re into a band you stick with them and there’s a lot of loyalty, and the same with the metal world.

E&D: Thanks for taking the time to come down and talk to us, Charlie. Obviously you’re touring off the back of the Vector album. Now that it’s been a few months since the release, how has the reaction to it been?

CG: It’s been really overwhelmingly positive, and it’s by far surpassed our expectation, I think. It was a heavier album that was more succinct, and that’s not what normally happens in prog music; it’s normally long epics and you try and fill up as much time as possible. But for this one we tried to keep the songs shorter and more focussed, and it’s good that the prog community has accepted that. We have a way of trying to do something different with each album, and it’s nice that the fans are open-minded enough to accept that.

E&D: Did you go into the studio to record a shorter heavier album, or did that just evolve naturally?

CG: We never really have any idea what the end-result is going to be when we start writing, we just want to see what happens. You just instinctively know when you’ve got enough music that it feels like a complete piece of work. We expected a little bit of criticism to come with it, but we have to ignore what people expect. And also, a lot of my favourite albums are around that length: Megadeth’s Rust in Peace is about that length, and all the Gentle Giant albums are really short as well. So it felt like it wasn’t a massively controversial thing as well, but people comment on it.

E&D: Do you keep the reaction of fans in mind when you’re performing the songs live, especially when you can get instant feedback?

CG: We’ve learnt over the years that the heavier songs translate better live. The audiences react more to the heavy riffs and grooves and we enjoy that. We enjoy the way that playing heavy music live feels for a band, so we just kind of went for that. There’s a few moments that are a little bit softer and chilled out, but on the whole it’s very high energy and lots of riffs.

E&D: You had “Nolly” [Adam Getgood] of Periphery fame helping you mix and record the album. Was that planned ahead of time once you knew things were staring to become a bit heavier?

CG: We’ve known Nolly for years; even before he was in Periphery, we knew him from his previous band Red Seas Fire. So I’ve known him for years, and I’ve watched what he’s been doing and I’ve wanted to work with him. But when it came to the album, the music came first; so once we knew what we were coming out with, we thought that this would be a good time to work with Nolly because we thought that the songs would probably be brought to life really well with his production. And he was available, because a lot of these guys get booked up, but luckily he was available.

E&D: Going back to what you were saying about getting a complete piece of work, Vector has very strong themes running through it which you can tell from the album art. How did you craft that?

CG: Well, from The Mountain onwards our albums have been almost concept albums. I describe them as soundtracks to a movie that doesn’t exist. I always think of Highlander with the Queen soundtrack which is such a cool part of that movie; but if you hear the A Kind of Magic album you’d have no idea what the story of Highlander is. So it’s kind of like that with each of our last three albums: we wrote a short story for each one of them, and we used that as an inspiration for the songs. So this one is about a mental institution with the whole thing happening inside the mind of this patient who’s in a catatonic state, but he can hear what’s happening around him. So you’re experiencing what he’s visualising from that environment. The whole thing started and we had this idea of a One Flew over the Cuckoo’s Nest vibe set in the fifties, so the opening track is our interpretation of what it might feel like to have that electro-convulsive therapy; like when they get Jack Nicholson, tie him down and turn it up to maximum. So that sound you’re hearing is what that’s about, and it kind of triggers the rest of the album.

E&D: You mentioned how the crafting of the albums changed over time. When you recently did your ten-year anniversary tour, did that give you the opportunity to look back on those ten years and see what you’ve done and appreciate how far you’ve come in that time?

CG: Definitely. We did the whole thing of looking all the way back to the Aquarius album, which was the first proper album that we made. It was fun to revisit those songs, because we hadn’t really played them that often recently, and we made this medley of some of the songs. But there was definitely a sense once we did that of while that was fun, we need to now look to the next ten years and start something new.

E&D: During that time you’ve also grown your fan base at quite a fast rate as well. Do you have a strategy for doing that using social media, or do you just do your thing?

CG: Well I’m not really a social media guy, but a couple of the other guys in the band have more of an idea of how best to use Facebook and stuff like that. I’m the wrong guy to be asking about social media, to be honest. That’s one thing, but the most important thing to do is getting yourself out on tour and putting yourself in front of audiences. We’ve seen that even from the last time we toured Europe a couple of years ago, comparing that to the tour that we’re just finishing today, some of the numbers have doubled in the places we’re playing, which is incredible. I don’t really know what we’re doing, but whatever it is, it’s working and we’re going to keep doing it.

E&D: You are on tour an awful lot. Do you sometimes wish you could have a break?

CG: When I’m not on tour, I dread the thought on going on tour, because it’s such a gruelling lifestyle and every day is really non-stop. So when I’m at home I’m thinking I’d like to tour a lot less. But when you’re in it and doing it, it’s really fun and I wouldn’t change it for anything.

E&D: You also toured with Mike’s Portnoy’s Shattered Fortress. I have to ask how that was as well.

CG: That was great, for me. I’ve been a Dream Theater fan since ’92. I started with When Dream and Day Unite, which was the first album of theirs I heard and then on day one of every album I was there buying it; so I was probably one of the biggest Dream Theater fans you’d ever meet in the nineties. So to tour with one of those guys who invented this genre, and Portnoy’s such a strong force with promoting prog metal, and just to play with one of those original guys of the nineties progressive metal sound was just amazing.

E&D: Prog music is in a bit of an interesting place right now because rock and metal in general is said to be decline, but prog seems to have this really solid base. Do you get a sense of what the scene is actually like?

CG: I’m a fan of progressive music and I’ve never stopped being a fan of it, and I think that’s the same for everybody. Once you’re into a band you stick with them and there’s a lot of loyalty, and the same with the metal world. Metal fans are very loyal and they stick with who they like and there’s a lot of that. And we’re still discovering that some people haven’t heard of us, so it’s great to be picking up new people still after twelve year.

E&D: Once the Vector tour comes to an end, have you thought about what you’re going to do next?

CG: We’re going to start writing pretty soon. We’ve got a few more shows to do throughout March and April. But then when we get home we’re going to start writing the next one. We have to keep things moving, because we’re not really in a position where we can sit back and enjoy the fruits of our labour. We have to keep doing it and keep earning money to live (laughs).

E&D: You’ve toured really far and wide this time, to North and South America and all over Europe. When you come back to the UK, does that feel like a homecoming?

CG: Yeah sure. I’m from London and you feel more comfortable playing in your home city. So it’s going to be a nice atmosphere tonight. It usually is, London crowds are always really rowdy and loud, and sing along to everything. It’s going to be really fun!