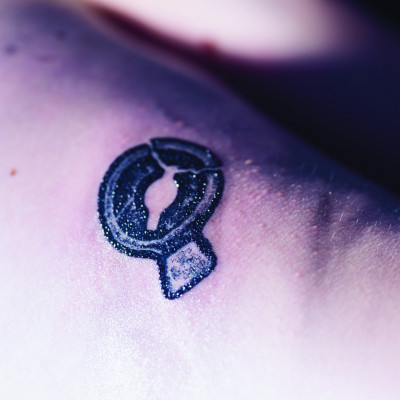 Bolt Ruin’s self-titled release is one of the most intriguing promos I have seen come up for review in the eight years that I have been writing. It was stated that they “bring dark electronic music that fuses the energy of hardcore punk with the delicacy of classical music” and that was enough to get me interested. I have tended to stay within my comfort zone for a while musically and something was needed to get me out of it. This sounded like exactly the type of musical fix I needed.

It opens with the sparse soundscape of ‘Marjhed’, which is a perfect starting point for this record to start. It slowly introduces you to the many different layers and emotions right from the very start, easing you in with its subtle beat. ‘Przenac’ follows, a more sinister sounding track with the intermittent, towering sounds growing ever louder and more distorted before they fade away to a point where they start becoming one constant pulsating thud. A very captivating start. ‘Psilentze’ is a much busier track than either of its predecessors and also the most straight forward so far. It has a simple beat that drives through the core of its running time and lifts the mood for a short time.

That mood is only lifted for a short time though as ‘Dravvn’ appears, a sombre piano and strings led tune that has a real soundtrack feel to it. It is music that you don’t always realise is there on a film, but without it the scene just wouldn’t feel right. ‘Disperish (ft Dialect)’ raises the atmosphere again, a soaring track which becomes heavier as it goes on. It almost sees like a bit of a reaction to the quietness of the previous track as it builds in a similar way to those towering, threatening noises from ‘Przenac’ before slowly dying out. It really is a pity that this release is only six songs long, as the closer ‘Tshred’ really does feel like the closing scene and end credits to this story, but a story that has left a huge cliff hanger and leaving you wanting more.

A very different half hour of music than I am used to sitting down with, but one that enthrals and draws you in deeper as it goes. It’s quite a relaxing listen on the whole but you are never fully safe as it throws many broken and distorted noises at you to stop you getting too comfortable. That original description has got this solo production exactly right, it has the orchestral feel of a film score, such is the detail of each of the tracks and how each individual track tells its own story. The punk energy comes from the deteriorated and warped noises that break free from the more sombre and desolate moments. A really special piece of work, that definitely deserves your time.