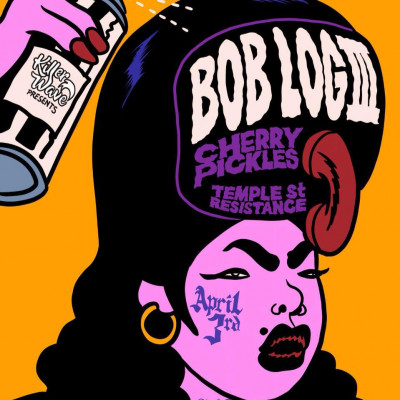 As a second tentative spring turns back to winter, and the country fractures insanely along the Brexit faultline, I head down to the Hare and Hounds for a midweek, lo-fi, garage blues shindig turning over a simpler, more eternal, divide in my mind: “There are only two kinds of people in the world, Beatles people and Elvis people.” Tonight I’m among my brothers and sisters on the right side of that particular issue, because this is Elvis country. Capes and showmanship, rhythm and blues, dancin’ and drinkin’ and carryin’ on. Garage is a weird parallel world, suspended in time. Like a musical dive bar its door is always open but it’s just not for everybody.

Cherry Pickles are Birmingham’s newest, most enthusiastic garage-pop duo, bad little sisters to Black Mekon and Table Scraps. Fresh back from a trip to SXSW with a strikingly titled debut album Cherry Pickles Will Harden Your Nipples out this week on PNKSLM Recordings, they have great outfits, a theremin and a puppet in a cardboard coffin onstage. Mimi plays stand-up drums with maracas, while Priscilla sings opening number ‘El Fantasma’ in what I take to be Portuguese. It sounds like The Monks as played by The Shaggs. If this is your kind of voodoo we’re already at ‘Shut up and take my money!’ but they follow it with a couple of tunes that really nail the hubcap to the wall of the shack. ‘Elvis Exorcist’ is totally Brix era Fall, as much for the insistent guitar line as the vocal yelps, and relates an encounter with the undead king of rock ‘n’ roll himself. Then Priscilla sings through a telephone about her undying devotion to the late Cramps singer on ‘I Still Miss Lux’. Don’t we all sweetheart, don’t we all.

They’ve something of a manifesto in the unrepentant ‘Let’s Be Bad’ while ‘It Will All End In Tears’ is a sweet slice of tearjerker pop with a bedsit Shangri La’s vibe of the sort beloved of emotional young drop outs, hair hoppers and doomed romantics the world over. Although essentially a stripped-back guitar and drums duo there’s a shadow figure lurking to the side of the stage playing guitar and so freeing Priscilla to concentrate on her vocals. Could it be Bruce Wayne? When she plays as well, technological chaos briefly reigns, but they come together to great effect on ‘Jimmy The Werewolf’ a hazy dreamer of guitar fuzz and deadpan vocal sighs. Of course, they’re also joined by Mopkins, their number one fan and puppet in a coffin, who is dressed as tonight’s headliner Bob Log III. You either find this funny or you’re in the wrong place to be honest. He’s almost as big as they are and they really deserve a bigger stage – if only so we can see their outfits, which are showbiz in a thrift store white-trash glamour way, the best kind. Inevitably, and perfectly, it all collapses rather suddenly in a shambolic pile. Brilliant.

Bob Log III is what you might call a consummate showman – a triumph of commitment and rock ‘n’ roll energy over anything so damn fancy as song-writing finesse. His is the sound of indiscretion; he is here to bring GUITAR PARTY POWER and he is not about to take no for an answer. A one-man band, Log wears a shiny full-body jumpsuit, complete with glittery cape and a helmet with an old telephone receiver built into the front, through which he speaks reasonably clearly and sings incomprehensibly. He is not shy about his own abilities nor embarrassed to claim that this is the greatest night of his life. His act is pretty much all shtick and no songs – and there you go again with yer assumptions, like that’s a bad thing. Garage blues does not offer much scope for ‘growth as an artist’ but calling it limited is like complaining metal is loud or rap has too much swearing in it. Log has a line in stage patter to put any number of stand-ups to shame. and a fistful of gimmicks to keep things moving forward. He makes toast, hands out balloons for us to inflate and then stamp, and fills a large inflatable duck with Bucks Fizz before passing it among the crowd.

Carrying the whole crazy thing forward is his undeniable ability as a guitarist; his playing is a relentless foot-stomping blast of blues-punk shot through with distortion and squealing slide. It is infectious, joyous; and he makes it look a lot easier than it is, almost incidental.  A man outside of time, Bob Log III is both the past and the future. While the modern world does impinge on his – he enters, already playing, from the back of the room and is immediately bathed in the glow of camera phones, he invites half the audience up on stage to take selfies on his knee as he plays and send them to their mothers, and there’s a surprising array of nifty gadgetry surrounding him – none of it seems essential; he is in a deep sense still an analogue entertainer, spiritually tied to pre-electric bluesmen stamping a rhythm and playing slide in delta shacks. When all the power eventually goes down. Bob’ll still be able to play. He’s been doing this for over 20 years and plays over 150 shows a year; no idea how he manages it. Maybe he really is a damn superhero.