(((O))) Review: Abul Mogard – And We Are Passing Through Silently 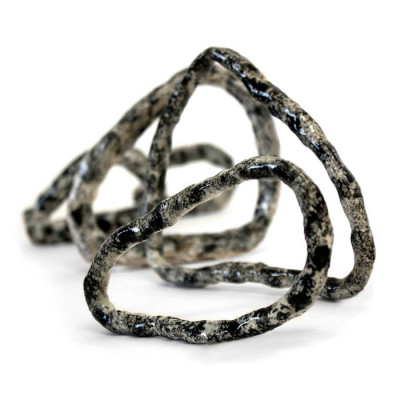 And We Are Passing Through Silently by Abul Mogard

Abul Mogard is an enigma. A native of Serbia, little is known about him, apart from that he has spent most of his life working in a metal factory, and that he came to making his own music late in life, following his retirement. A publicity-shy cult figure, Mogard seems perfectly content to let his music speak for itself. And We Are Passing Through Silently is something a little different, however, showcasing Mogard’s radical treatments of material from other artists. Over five lengthy tracks, the reclusive Mogard takes original work from Aïsha Devi, Penelope Trappes, Nick Nicely, Becoming Animal and Fovea Hex and transforms them into mesmerising new shapes, utterly unlike their original incarnations and yet, strangely, retaining their intent.

It may be supposed that Mogard’s vocation has influenced his creative process – just as metal is heated and re-shaped to suit a variety of purposes, so Mogard’s tendency is to radically re-shape the music as he re-imagines it, reverse engineering it so that conventional song structures are subverted or stripped away altogether. Consequently, none of the material here bears any real resemblance to its original form; this is not remixing in its typical sense, but something altogether more ambitious and distinctive. Whilst his musical approach is worlds away from the warped musical genetic experiments of Aphex Twin, or The Orb’s playfully cosmic voyages, Mogard, like them, bends the original material into new, intriguing shapes that are instantly identifiable as his work. Nick Nicely’s ‘London South’ becomes a series of elegaic electronic waves under Mogard’s sure hand, Aïsha Devi’s ‘O.M.A.’ a womblike sussurating cavern of sound, and Becoming Animal’s ‘The Sky Is Ever Falling’ an intergalactic voyage through a procession of shimmering sonic nebulae. Perhaps even more impressively, Penelope Trappes’ already hypnotic ‘Carry Me’ is turned into an almost monastic meditation of solidarity, radiating empathy in waves, whilst the closing, almost hymnal, reinterpretation of Fovea Hex’s ‘We Dream All The Dark Away’ slowly builds immense walls of sound around Clodagh Simonds vocal, steadily growing in intensity and power to deliver a powerful climax that will find you unconsciously holding your breath for the last few minutes. It’s like a health spa for the mind.

And We Are Passing Through Silently is a deeply intriguing record. Like all the best remixing work, the material here is not intended as an alternate version of the original so much as a wholly original work by Mogard himself. What he preserves from the original recordings is often unidentifiable or entirely elliptical, yet he has an uncanny, intuitive sense of the heart of each recording. It’s clear from these tracks that he has a particular fondness for the voice, and even when the vocals are themselves are not the evident focus, the music somehow gathers around them, gives them space. The core of the vocal performances is preserved in such a way that they enhance the new musical environments, as if the music has grown naturally around them like vines around an abandoned building. The result is that five disparate tracks by different artists are brought together into a new, cohesive narrative; a hushed, richly atmospheric musical journey that is never content to rely on the clichés of the genre. Mogard’s is a singular and powerful musical vision, and each new release brings it into clearer focus whilst also adding new ingredients. His highly emotive and very human music clearly has a great deal of care and attention lavished on it, and the haunting, evocative results speak for themselves. This beautiful record definitely whets the appetite for further reconstructions from the Mogard camp, where it seems anything can be given a magical new form.