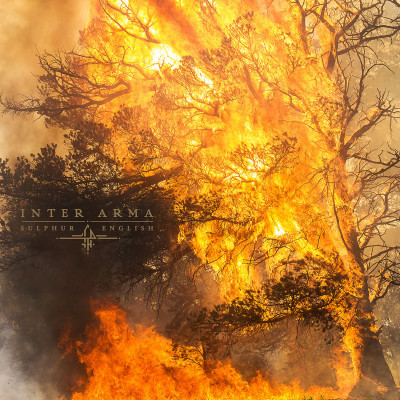 Inter Arma should not need much in the way of introduction. The Richmond, VA band’s previous album, Paradise Gallows, is widely regarded as one of the best metal albums of the past 10 years. On it the band showed an astonishing ability to defy genre and convention in crafting highly complex songs that were both heavy and accessible. Two years later we get the band’s follow-up, Sulfur English, and it is a very different animal.

I’m tempted to describe the album as Kid-A to Radiohead’s OK Computer. It represents a push by the band into some unfamiliar territory following a highly acclaimed predecessor record, almost as if the band is uncomfortable with its success and wants to surprise fans and build something new. Anyone who was looking for more of the same will be disappointed. They shouldn’t be. The album is amazing and easily one of the best I’ve heard to date this year.

The Radiohead analogy is a bit flawed in that while that Kid A was a fantastic album, OK Computer was actually the more experimental and less stripped down. Here it’s the opposite. Sulfur English is more experimental. It is also darker and much, much heavier. The band pushes further into death and atmospheric post-metal but with an angry intensity that never really gives the listener a break. Even the numerous slow, more meditative bits are dripping with emotional weight and not particularly comfortable. But like Kid A, the album just gets better and better with more listens. And like Kid A, you could make a good case that it is, in fact, better than its predecessor. I certainly like it better.

The album starts with misdirection, a heavy riff looking to grow into something but instead resolving into a sonic wash, like a life cut short, a spirit leaving a body. From there the band launches into a full-on death metal assault. But it’s a hugely complex affair and goes nowhere the listener expects. The band easily moves from one musical style to another, at times its black metal, then its doom, sludge, you name it, it’s here. Even within songs, there are often five or six distinct movements.

I always thought that Paradise Gallows had a bit of a sense of humor to it, a weird sense of joy buried under all that metal insanity. That does not exist here. Sulfur English is a walk through an intense dazzling hellscape, pure in its scope and focus and absolutely unrelenting. It’s the soundtrack to a movie that doesn’t exist because it’s not about fantasy, it’s about something more real. The album is somewhat political, which is a departure for the band and explains some of the sense of anger. While singer and lyricist Mike Paparo won’t fully reveal the lyrical content, and good luck distinguishing any here (although some of the lyrics are on the band’s bandcamp site, for you hardcore geeks), at least two of the songs including the title track ‘Sulfur English’ are a reflection of the awfulness of modern American politics. Like ‘War Pigs’ but fit for a modern era of elected shitheadedry. Other songs are deeply personal, again something of a divergence from the band’s previous reliance on more literary themes.

What’s fascinating about the band is its near perfect musicianship. The band is often associated with sludge and doom, but other sludge bands don’t typically have the same level of precision. While reviewing this album I took a few breaks and put on other music to clear my ear palate. But nothing sounded as good. I’d notice small imperfections, the drum hits slightly off, the balance of instruments not right, the vastly inferior vocals and have to go back to Sulphur English with even greater respect for what these guys have accomplished.