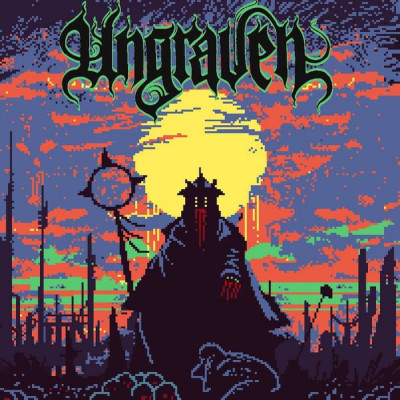 Language of Longing by Ungraven

This debut EP from Ungraven, a long time side project of Conan’s Jon Davis came with a recommendation “if you like Fudge Tunnel, Godflesh, Conan, Nailbomb and Bathory”, and that’s a hell of a set of bands to align yourself to. For many musicians, that is also a very high standard to set yourself, and I would expect that many would fail to get close. Luckily, we are dealing with someone who has consistently delivered music of a quality that means that these aren’t simply aspirational but also a decent indication of the level of noise on offer over the course of the 26 minutes running time.

Opening with ‘Blackened Gates of Eternity’, it sets its stall out very early. No quiet or haunting intro here, just straight in with the huge riffs, and straight away you have the undeniable influence of the first two bands, imagine Alex Newport providing his disparate vocals to the regimented stricture of a Godflesh backing and you are on the right track. ‘Impale Lore’ follows a similar musical path, although has more than a touch of Cathedral in there, as heavy as the track before but also a hell of a groove hidden away in there.

‘Aggro Master’ opens up with a ferocious riff that settles down to a pulsing, hypnotic beat that drives this malicious beast along before ‘Onward She Rides to a Certain Death’ again calms things down a little, back to a more relaxed pace, although that is pretty well camouflaged by the distortion and general volume of everything. All that leads towards the final track, the absolutely ridiculous (in a good way) ‘Targetted’, an eleven minute instrumental that bores into your head and gets you in a trance with its repeated, hypnotic doom drone. Think of a full-on industrial doom version of Karma to Burn and you won’t be too far wrong. To keep what is essentially the same riff going for over ten minutes and keep the listener engaged to the point where you don’t realize how long the track is some skill. A fine way to close what is a very good debut release.

Described as “a wheezing iron hulk of aggro – infused pessimism that aims to blast your ungrateful head right off your shoulders”, it isn’t too far away from that. An absolute brute of a release for a debut, and it’s a pity that it has taken as long for something to appear. I can only hope that the next release isn’t that far away, as this is something I need to hear a lot more of. If you appreciate any of the bands that inspired this project, then this is pretty much an essential listen.