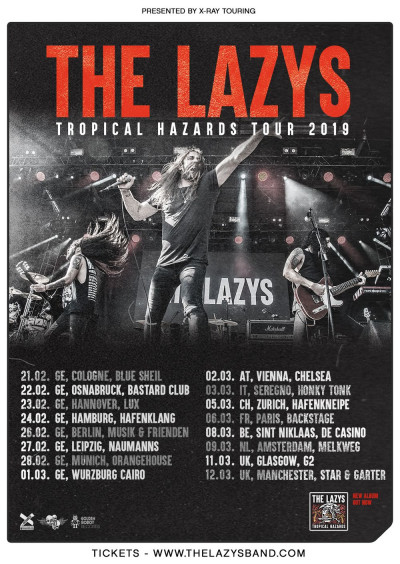 The Lazys at House of Vans, Waterloo, London

The Lazys on the web:
Website | Facebook |
Support: The Standstills| Fizzy Blood
March 13, 2019 at House of Vans, Waterloo, London
Promoter: House of Vans

It’s my first time at the House of Vans (when I eventually find it) and as I stroll down the ramp towards the stage I’m mildly discombobulated by my surroundings. They’ll tell you it’s the closest thing we have to Liverpool’s famous Cavern Club, but I can’t escape the feeling that I’m actually in a trainer shop in Covent Garden in the midst of a refit. Never mind though, for the sound is good and the bar staff are friendly.

The first sounds, playing me in are by Canadian duo The Standstills who have been The Lazys regular touring partners this time out.  Typical of the blues-rock two hander, the bands sound is the familiar ‘whomp, whomp, skronk’ of The White Stripes mould. Renée Couture on drums may be the “sexiest drummer in rock ‘n’ roll” according to singer and guitarist Johnny Fox, but sadly we don’t know what her backing vocals are like as her mic appears to off, which is a shame as I think it would have added a welcome, feminine texture. They do put in an energetic, likeable performance, full of sleazy crunch and they have some songwriting chops too, evident on the slower ‘Rise and the Fall’. However that limited palette of drums/vox/guitar never really lifts the soul until  ‘Wild’, weird beats and all, and the Royal Blood-esque riff-tastic closer. Party started.

The evening is now thrown a curve ball by the appearance of Leeds mob, Fizzy Blood. I had noticed a fair few less denim-&-leather clad indie rock types filling the space ahead of me after The Standstills finished, and the band onstage reflect that change of style right back. Fizzy Blood look like they met playing for their pub’s Sunday league football team. Their mismatched scruffy styling in some ways is a pointer – an un-pin-downable groove rock, noisy, post-punk, alt-baggy Beefheart stew, where influences briefly tug on your ears before shuffling off to be replaced by the next vibe. The band also have three guitarists, a bassist who looks like he’s been possessed by Steve Harris and a drummer who owns a cowbell and is NOT afraid to use it. Apart from the last two tunes, which were slightly more straight ahead Arctic Monkeys circa AM – think croony, alt rock shimmies – the rest was a shifting triple guitar, eccentric, sonic haze, recalling everything from Pixies to Eat to The Stone Roses. What’s not to love?! Reader, I visited the merch table directly after the set. I’m looking forward to the album guys!

So, it’s by no means a home crowd for The Lazys, but by the time they hit single ‘Little Miss Crazy’ 20 odd minutes in to their breathless set the whole audience is on their side, rocking and hip swinging. They pile on in a flurry of sweat and guitars to ‘Howlin Woman’ and proceed to hurtle thru a series of bangers off their rather good debut Tropical Fever. So overpowering is their presence that I’m startled when I check my watch and find how short a time they’ve been on before the aforementioned ‘Little Miss Crazy’. Included in that opening salvo is my personal favourite ‘Half Mast Blues’, rare pirate-themed metal it’s not so naff it needs hiding in Davy Jones locker.

Vocalist Leon Harrison has a raw, simian physicality akin to Blaze Bailey or Gary Stringer, whilst lead guitarist Matt Morris is an irrepressible show-off who looks like a young Tom Araya on Ecstasy possessed by Gene Simmons. It’s fair to say they seem born for bigger stages. ‘Louder then Youth’ is virtually feral and from then, as we’re warned by Harrison, it gets “fucking heavy” but still sees extra showboating from guitarist Morris who moves to the back of the room and solos from atop the bar.

The closing ‘Nothing But Trouble’ feels a bit pat but, hey, it’s rock and roll, and there only so many places you can go when you’ve thrown the kitchen sink at people for an hour. Yes, they are an Aussie five-piece who sound like AC/DC, but they do it with panache, and actually have a few more thoughtful, intelligent songs in their locker, which are not aired tonight. The Lazys are surely deserving of bigger, wilder, drunker audiences, and I recommend you make it so at Bloodstock or anywhere else you happen to find them.