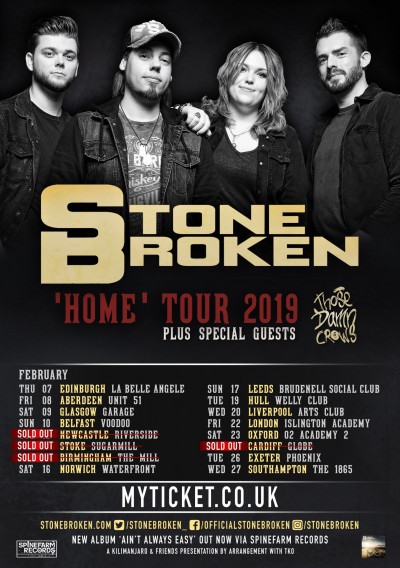 Stone Broken have quickly been making a name for themselves in the British hard rock scene since the release for their self-financed EP The Crow Flies back in 2014. Less than five years later, the four-piece from Walsall have two albums and several tours of the UK as well as tours of the US and Europe under their belt. Not only that, but their latest album from last year Ain’t Always Easy has earned them several plaudits from fans and critics alike, including the likes of Planet Rock who gave the album third place in their best of list from 2018. After having toured the album across the UK, in the first instance shortly after its release before heading out to foreign pastures, Stone Broken embarked once again on another UK-wide and aptly named ‘Home’ tour (named after a song from the album itself), along with rising stars of British rock Those Damn Crows and Dead Man’s Whiskey. On an unseasonably sunny Saturday, these three bands packed out the upstairs venue at the O2 Academy in Oxford for a night of good old-fashioned rock and roll.

Dead Man’s Whiskey, from London, were up first, and wasted no time in showing the growing crowd what they were about. Solid riffs and heavy rhythms ensure from the off and frontman Nico Rogers does his bit, filling the venue with his booming choruses. The five-piece can barely fit onto the tiny stage, but still do what they can to make their opening set as exciting and energetic as possible. The general reaction of the crowd was of pleasant surprise that this largely unknown band were putting up such an attention-grabbing show and engaging them to the extent that they were able to do. They were by no means one-trick ponies either. Regardless of whether they were pulling out the big choruses of ‘War Machine’, bringing out the thrash elements of ‘Raging Bullet’ or even going for a full-on power ballad with ‘Make You Proud’, they were able to win over the crowd fully. Musically-speaking, their live set could still do with some polishing, but for the half an hour that Dead Man’s Whiskey were on stage they were highly entertaining and worth showing up early for.

Those Damn Crows hail from Bridgend in South Wales, and are also relative newcomers to the rock and roll landscape, having only just released their debut album Murder and the Motive last year. They looked for all the world like they had been doing this much longer, as they approached their set with a confident swagger which immediately had the now-full venue hooked. They started with the high energy and fast-paced ‘Don’t Give a Damn’ and set the tone from there. Both bassist Lloyd Wood and frontman Shane Greenhall were bundles of pure enthusiasm throughout the set and gave the band a real presence on stage. Showmanship and musicianship were both fully present for Those Damn Crows this evening and nowhere was this more evident and memorable than for their single ‘Blink of an Eye’ which was performed with real power and passion which would not have been out of place in an arena. Ending their set with ‘Rock ‘n’ Roll Ain’t Dead’ was another solid move as it encouraged great crowd participation and also left the audience with a terrific sense of satisfaction ahead of the main act.

The performances of the opening acts do not detract from the headline act as the Oxford crowd extends a very warm welcome to the rockers from Walsall. Stone Broken take to the stage in true rock and roll fashion with smoke machines and heavy guitars to ‘Stay All Night’ from their debut album All in Time. One of the things Stone Broken have become known for in their short history is quickly developing a solid, dedicated fan base and the Broken Army (as they have been dubbed) appeared to be out in full force to support them. They take all this support in stride, it seems, moving neatly into ‘Doesn’t Matter’ and ‘Heartbeat Away’ from Ain’t Always Easy. Stone Broken’s catchy, anthemic, southern-driven hard rock is unsurprisingly a real crowd-pleasing endeavour, and the crowd let the band know it by loyally singing along with Rich Moss to every word they can.

Moss is not your typical rock-and-roll frontman, as he takes a more genuine and heart-felt approach to the crowd interaction between songs than may typically be expected of a band of their ilk. He is a compelling presence onstage though and his manner, not to mention his incredibly powerful vocals, arguably go a very long way to explaining why the band have built up the following they have. Guitarist Chris Davis and Bassist Kieron Conroy play their parts as well making full use of the stage and the platforms placed around it to keep the performance energetic; while drummer Robyn Haycock brings a sense of tremendous fun and enjoyment to proceedings, particularly during her drum solo midway through. After a thirteen-song set of very high quality, Rich Moss comes back on stage on his own for an encore where he delivers an extraordinary acoustic rendition of ‘Wait for You’, which is far and away the highlight of the night. The 75-minute show ends with the fan favourite ‘Not Your Enemy’ and brings an end to a terrific live performance. Stone Broken have demonstrated why they are such an exciting act on the UK classic and hard rock scene right now. They bring a freshness, energy and genuine passion to a style of music which is often derided as obsolete; and will surely continue to work their way up to bigger venues and bigger crowds in the years to come.