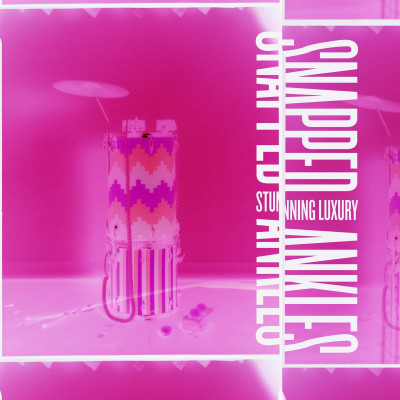 I’ve been seeing the name Snapped Ankles around for about two years now and from the first time I did, I’ve wanted to watch them. Not often is it that a band’s moniker has such powerfully visceral imagery that I think they’re worth my time on name alone. The hype train also played a small role in plastering Snapped Ankles on the walls of my brain but, realistically, only you can decide if something’s worth your time. I went into this record with no idea of what I was getting but, I had hopes and expectations for something graphic and relentless. Stunning Luxury tantalised and bewildered me; leap with me through the wormhole and I will give you a tour of this fucking weird music.

Upon hearing ‘Pestisound (Moving Out)’ I am totally blindsided by the unexpected nature of the band’s music. Where I had expected aggressive, early-HEALTH mixed with a band like Bloodsport as a sound palette for a band called Snapped Ankles, I quickly found that the band were far from that and in all honesty, were way more reminiscent of surrealistic psychedelia influenced tv show music such as that of Rick and Morty and The Mighty Boosh. It’s actually “groovy” and “fun” and usually, I’d write that off immediately but, in this case, I feel totally disarmed by how surprising it is. ‘Dream and Formaldehyde’ sounds like something by Air and reminds me of that episode of Bojack Horseman where Bojack gets stuck underwater. I’m still fucking shocked by how different it is to what I was expecting but, it sounds fucking amazing. There’s no track I’d rather sit and smoke a joint to right now. Every single aspect of the song is so smooth and welcoming; it’s fun and gooey and wholesome in a way that seems totally earnest. All of the whooshing and bubbling synths, feels like some sort of psychotropic soother, it’s really comforting.

‘Tailpipe’ is closer to what I expected Snapped Ankles to sound like but, it’s nowhere near as heavy, it’s kind of like some sort of Barberos/Mr. Bombastic hybrid that on paper sounds totally shit but, on listening is weirdly alluring. I honestly, think if I hadn’t listened to this myself under false pretenses, I’d have completely dismissed it from what is in description alone. I feel like Snapped Ankles are actual fucking extra terrestrials who communicate in wonky kraut-psyche electronic boogies. Some of the sounds from ‘Letter From Hampi Mountain’ sound like a modem being cooked in a microwave and I love it. I feel like I’d have fucking loved this album as a child, there’s so many sounds whooshing around and so many little bassy grooves ad experimentations with rhythm, I wish I was listening on acid. ‘Rechargable’ is fucking great, however, there is an extent to which I think the monologue is just affected glam nonsense. Moreover though, I’m not sure that really detracts from this because of how surprisingly silly it all is. In any case, the backing vocals add fucking loads to this song. I think there’s an extent to which the lead vocals are a bit too restrained on this record though and it’d probably be good to see more diversity there. There are times when it feels like the album’s vocals are all just part of one long sermon from someone on a muffled tannoy or some other such mildly incomprehensible public address system.

‘Delivery Van’ is pretty fucking nuts, particularly near the end. The album has begun to remind me somewhat of King Gizzard and The Lizard Wizard, in its use of motif, in that some of the songs sound very similar in certain ways but, then they just throw it in the blender and give you something spectacular. ‘Three Steps To A Development’ feels like a big step in a different direction for the album, the bass takes the centre the stage with pulsating stabs for the first half and then for the second half the songs deconstructs into a welcome exploration of percussion and squelchy synths. The production work is fucking stellar through out the record but, in ‘Skirmish In The Suburbs’ (and ‘Dream and Formaldehyde’) it really stands out, the whole track feels like climbing out of a warm bath at one thousandth of the natural speed. Slowly curling ambient pads rumble against, an upbeat rhythm section as the overdriven vocals scream out of earshot like some ignored parent against a set of headphones. Stunning Luxury offers a wealth in good chill music, I do wonder if there’s anything here that’ll make me forge an emotional connections with the music though.

‘Dial The Rings On A Tree’ upon first hearing makes me think of bands like Talking Heads, A Tribe Called Quest, Massive Attack, et cetera, bands that people put on in the background for hanging out with friends, but, I feel like the downside of the album is that it’s too depersonalised. It’s alien and my initial joking assessment of it was that it sounded like “human music” but, I think a strong issue I have with the record is that it doesn’t make me feel anything other than, maybe quite at ease and relaxed. This doesn’t mean I won’t listen to the record again, I will certainly listen to this as a default chilling album and I’ll happily share it with friends but, I do feel like I’d like to hear Snapped Ankles make something that feels more human and emotional, whilst also being fucking weird and sonically mind-blowing.