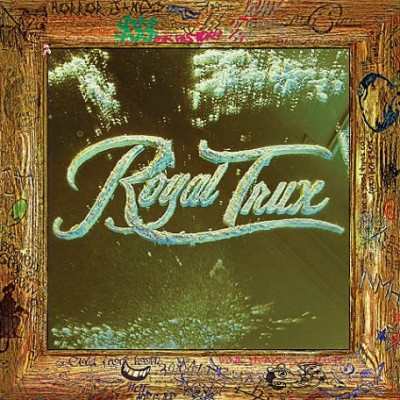 I knew it was risk to undertake reviewing the new Royal Trux album, White Stuff. Once again, the duo of Neil Hagerty and Jennifer Herrema have created another album of out there trashy punk rock n’roll that gives not one singular fuck. Around the time of their finest and most accessible moment, the classic 1998 Accelerator album, I took to investigating their back catalogue. Convincing myself purchasing each one was absolutely necessary I accumulated a collection of some of the most hideous sounds ever committed to record. A fair few of the albums, prior to Accelerator are virtually unlistenable, but luckily, the albums that followed were a tad more palatable.

So to find that the band were releasing their first studio album in 19 years brought a little excitement round these parts. Now I have the disappointment of finding that in a recent interview given to The Guardian, Neil has decided to call time on any future Royal Trux activities. Although Jennifer subsequently dismissed this proclamation in the second part of the interview. So who knows? What we do know is that White Stuff is another album of whacked out rock n’ roll that only this band could conjure up. In those interim 19 years, Neil released solo material and recorded under the name The Howling Hex (neither much good) while Jennifer put out some more intriguing music as RTX and The Black Bananas. But really, all of this was a poor substitute for the special magic that ensues when the former husband and wife record together.

Cracking skulls from the get-go the opening ‘White Stuff’ is upbeat swaggering prime Royal Trux. Seemingly a mash-up of two songs with the most miraculous of changeover points where the two songs have been bolted together. It consists of a fuzzy scuzzy guitar mire over which Jennifer and Neil rasp out rambling roughshod lyrics that make little or no sense to anyone but them. Swiftly on the heels of this encouraging tune comes ‘Year of the Dog’ which is instantly catchy and hurtles along at an intense speed. It’s another superior Royal Trux tune that is fully focussed and it’s all the better for it. Though it’s worth remembering that a focussed song by Royal Trux compared to a fare percentage of other artists is still a very ramshackle thing indeed.

The lurching ’Purple Audacity #2’ is a slippery groove of backtracked guitars and electro twinkles. But as the track progresses Neil and Jennifer do all in their power to derail the sprightly melody they stumbled across. ‘Suburban Junky Lady’ pops and fizzes with a pleasing groove that allows Jennifer and Neal to manically interchange vocals like only they know how. The depth of the instrumentation reveals new twists and turns with every play. What might appear as a total mess is actually an intricate web of dexterous guitar work.

But then things take a slight downward turn, ‘Shoes and Tags’ is a total head wrecker with too many off kilter guitar lines fighting for position over a fidgety percussive groove. It’s one of those whacked out tracks that makes you feel like you’re on some heady medication and is mercifully brief. On ‘Get Used To This’ the joyous and instantly recognisable clipped tones of former Ultramagnetic MC and fellow avant garde extravagant musician Kool Keith twitters on about “Champion Pizza” over a manic but ecstatic electro groove. Jennifer assists with upping the kooky factor with some incoherent blethering and the whole thing is like nothing you have ever heard.

The stinky ‘Sic Em Slow’ features a slow funky beat and quirky bass groove that provides the backdrop for Neil and Jennifer to let loose their stream of consciousness shit, before the track jump shifts at hyperspeed to another planet. ‘Every Day Swan’ is a relatively straight choppy rocker that is ultimately devoid of hook or memorable moments. The sublimely named ‘Whopper Dave’ provides another album highlight with a bristling groove that gets toes a tapping. Neil provides a poptastic riff and listen closely and you’ll hear a myriad of keyboards arching psychedelic rainbows.

Now that we have established that we’re on a sonic rollercoaster, ‘Purple Audacity #1’ is a pretty dire mishmash of ideas and ear bleeding sounds, that seems to exist so that Neil and Jennifer can inform us that “Southern California drivers are the 19th wonder of the world”. Album closer ‘Under Ice’ fires up in the most lo-fi of ways with the two cohorts mumbling to each other before the song officially begins. Signing off with one of the more coherent tunes on the album the drums are just waiting to be sampled and Neil shoots out one of his awesome riffs. Then we’re done.

Given Neil’s recent outpouring of remorse and denial about White Stuff, it’s hard to know what to make of this album. If it exists, solely as something that Herrema has released off her own bap, then it kind of leaves a bit of bad taste in the mouth. There are some tracks on it that are so half baked that they also leave your palette needing cleansing. It sits neatly in with the post Accelerator albums though, as a collection of songs that intrigue for the short term, but ultimately can’t stay with you in terms of repeated plays. Having said that, I’m glad it’s out there and the buzz that this band brought to me initially was most certainly evoked. Hopefully Neil has a change of heart and this is only the start of a new era from one modern rock’s most enigmatic acts.