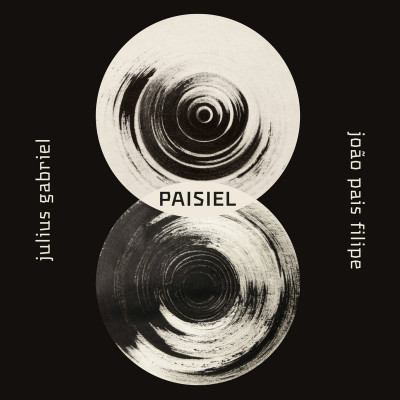 The brainchild of Portuguese drummer, percussionist and all round sonic sculptor Joao Pais Filipe, and saxophonist Julius Gabriel, Paisiel is very much a trip into the obscure free-form worlds laid open by Sun Ra and Miles Davis, but imbued with a sense of punk urgency more in line with early Hawkwind. Whilst there may be no motorik riffs, or space noises for that matter, within the music that unfolds here is a developing embrace of industrial space age sculpture, aligned with a sense of freedom in movement. Call it jazz, or call it space rock, the result is the same as you get hurled into a cavernous void.

The “trip” begins with ‘Satellite’ which pulls you in on Gabriel’s saxophone before leaving you adrift on a noise of sonic ambience, All the while the drums beat a tribal rhythm in the background inviting alien races into a cataclysmic war. White noise drone peers through the crack as a Paisiel cast us ever onwards on their mysterious path. Entrancing meditative moments offer a primal solution to the questions that the music throws up. Where are we going? What is going to happen? The choice is ultimately yours…

‘Limousine in the Desert’ doesn’t offer any further answers, only to develop that sense of otherness as the saxophone embroils itself in a free-form workout. Almost trapping itself within the confines of the drum beat, its itchiness pushes for escape but never quite gets there. It’s this tension which imbues it with a sense of excitement, setting it apart from the spaced out opening track into something much more akin to the avant-garde.

Following on from this, ‘Cause Yourself to Rise, Gong’ is a much more relaxed and musical affair. Taking a more traditional route, its playful melody brings in light to the prior darkness, offering a wonderful sense of fullness to the album. Amongst all the tripped out moments, and the freak-out explosions, it’s a beacon of normality that adds a whole new shade to the album. Shorter than the other two tracks, it is no less a required component in the twisted world of Paisiel.

If traditional song structures are your thing then you are probably best steering clear of this album, but if you are after some excellent freak-out jazz psych then dive right in. Gaining a re-release on the Rocket label, its free form sounds are the perfect accompaniment to the labels growing roster of forward thinking musicians. Redefining what psych is, Rocket have yet another great example with Paisiel.