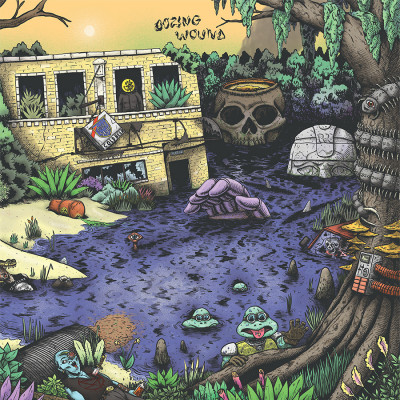 High Anxiety is the fourth full length blast of face shredding, metal thrashing fun from Chicago trio Oozing Wound. These guys first lurched into my attention behind a wild guy in a weird homemade Mexican wrestler’s mask. Lightning Bolt’s Brian Chippendale had made a series of solo records as Black Pus and I really liked All My Relations. I was interested to hear the next, and so far last, thing Black Pus did. Which was a split with these characters. In fact Lightning Bolt have been quiet for a few years as well now I think about it. I mean, I’m not saying these guys are responsible or anything but. . . has anyone checked their practice space? I’m just saying.

Hearing that split I thought “Woah, this takes me back a bit, but they don’t suck. Nice”. I’ve enjoyed everything they’ve done since but High Anxiety finds them sharpening their tools and stretching themselves as a band. Oozing Wound play thrash not as a narrow retro style, but dragged through noise rock and sludge and whatever else they passed along the road. They are over it with your Slayer comparisons. So we’ll leave that, Anthrax were always my favourite of the big four anyway. There was more punk in it, they had a sense of humour and it seemed like they had broader musical horizons. Same here, although they don’t really sound all that much alike. As an aside High Anxiety got me listening to Anthrax’s Spreading The Disease for the first time in years and while a couple of numbers haven’t aged so well and it sounds a little thin to doom battered ears it still absolutely kicks ass.

I got that same happy feeling and slightly manic grin the first time I put this on, when the feedback dies down and ‘Surrounded By Fucking Idiots’ really kicks in. As a statement of intent and general indication of tone, it’s perfect. Oozing Wound look around in dismay at the general levels of human stupidity, shake their heads and point and laugh the bitter laughter of the disappointed. Vitriol for all! On the wonderfully titled, and appropriately cranked up, ‘Filth Chisel’ it’s shoving white powder up your nose, on ‘Tween Shitbag’ rock scene posers “I’m so sick of rock ‘n’ roll…you live a lie”. Zack Weil has a great caustic rasp of a voice at some ideal mid point between cookie monster growls and high pitched metal wailing. On ‘Die On Mars’ he screams “I’m not paranoid, I’m not paranoid” and then “Much better now, much better now” in a way that makes you feel he really, really isn’t.

The sources of the titular anxiety are endless. I guess the album title is a play on words, is their fondness for getting high a way to manage that anxiety or does it just make it worse? Mostly keeping the tempo frantic they shift down to a slow grind for the epic ‘Birth Of A Flat Earther’. Stoners they may be but not enough to go in for red eyed conspiraloon nonsense. Written from the point of view of a flat earther assailed by those pesky facts it steadily increases in pace and intensity. It’s a fine example of the band’s ever greater control of dynamics. On this album as whole they sound clearer and sharper than before without sacrificing the considerable amount of noise that forms such an enjoyable part of their sound. The last couple of tracks see them back at full tilt. ‘Vein Ripper’ bringing saxophones and flute to the mix. You have to pay attention for it though, it’s not a jazz solo or a blast of freeform skronking Sex Swing style. The saxophones are blended in to the guitar in long notes, I’m not entirely convinced the flute is even there at all and not an inside joke but then that’s part of their charm. Noisy and furious High Anxiety is their most confident and focused record yet. As a way of purging the irritations it confronts it’s also strangely calming.