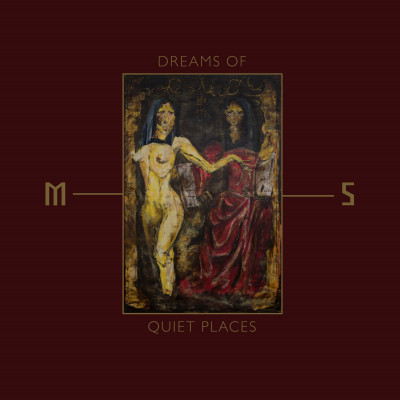 Dreams of Quiet Places by Mord'A'Stigmata

It’s a somewhat curious title for a raging black metal band, but a neat switchback of sorts is unveiled in the first lyric line of the album: “I used to dream of quiet places”: for the duration at least, any quiet places are firmly in the past. That outburst comes after a varied intro that builds from swampy hums and clacking-bottle sounds to a roving bass wander, then a slowish-paced but atmospheric surge that announces itself as the opening track ‘Between Walls of Glass’. This first track is very much a continuation of their previous record, Hope  which was a classic two-ten-minuters-on-each-side LP of expansive, but raging extremity. We’ll get the obligatory mention of their compatriots Mgła out of the way here- not so much because of nationality but just that band are so clearly the benchmark for a kind of savage but precise and tightly controlled delivery, where the ambience is not drawn from scuzzy tape filth or ramshackle kvlt feels but out of a fiercely intense grip on the musical form. Mord’A’Stigmata play a more expansive, extended, experimenting version of black metal, but there’s similarity in the sharpness of intent.

After the first track very much bridging back to their previous outing, the big surprise from here on out is how the band seem to have kept the furious underground extreme metal style but decided to bolt on several components seemingly dug up from an unreleased 1980s Skinny Puppy demo. This addition comes in only as a hint at first in the slightly unusual ‘treated’ sort of sound of the first statement of second track ‘Exiles’ which is otherwise a faster frenetic shake of the head after the exploratory opener. But then we get full synth-industrial dimensions on the follow-up, ‘Spirit into Cristal’ (yep it’s definitely spelled like that, so presumably an ode to your ghost getting trapped in a glass of fancy sparkling wine). After a brief lawnmower leafblower duet, we get a fantastic twangling synthy beat, somehow a bit nauseous despite inorganic sources, straight out of ‘Testure’ or ‘Smothered Hope’ by the aforementioned Vancouver animal rights industrialists, with another of their trademarks soon emerging in the unrepentant percussion blasts slamming an absolutist 4/4 rhythm. The quieter parts of the song are perhaps among the least successful bits for me, a bit arty angled shots through window frames when the band are at their strongest when chucking everything from their full arsenal of wild noises from the different genres.

The drums are excellently deployed to keep, disperse and manage tension and attention, as is well evidenced by ‘The Stain’ where a dirgey rumble is accompanied by a weird-angle elastic guitar melodies and mad-whisper-in-your-ear vocals. Throughout the track the focus is carefully directed through the percussive control, whether rollercoaster blast beats rolling the riff along, or the more drawn-back passages where nervous twitchery on the cymbals keeps you looking over your shoulder. In terms of the quieter or slower realms, stronger than the earlier bits on the ‘Cristal’ song are the voids within the track ‘Void Within’… here there’s a strange chiming rhythm effect like being trapped in a dream world where the dimensions are all wrong, while there’s more of the synthindustrial beatlines running jagged lines through the track. And finally, the short title track sets out its electrodarkwave influences.. no, not influences, more like intense and highly convincing devotional reconstruction, with drumpad paps and clinks, howling-wind-sent-through-the-washing-machine sample and strong sense of ambient keyboard melody.

An unusual creation from a Dr Frankenstein of the extreme underground(s), marking Mord’A’Stigmata as innovators up to their bloody elbows in viscerally charged sound.