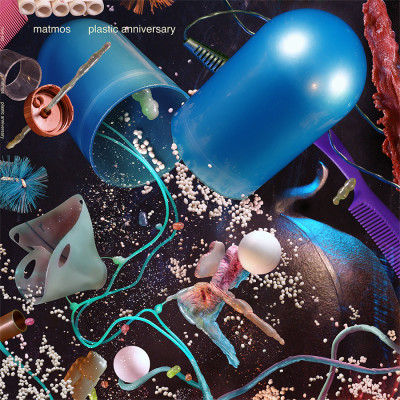 Plastic Anniversary sees Matmos recycle the sounds of discarded plastic into exploratory electronic music. It considers the ubiquity in our lives of this most extraordinary material and the environmental consequences looming ahead of us as a result. It’s less the dark and dystopian polemic that might suggest than a series of toy shop experiments in the plasticity of sound. This is a central Matmos device, undercutting their intellectual rigour with a playful approach. Their last album, Ultimate Care II, took us on a musical journey through a washing machine. It was both conceptually forbidding and at the same time essentially quite daft. If you’re tempted to see all this as just some kind of art school joke they’re way ahead of you, pushing right to the point of absurdity on the opening track. ‘Breaking Bread’ is made from the sounds of broken vinyl records by 70’s soft rockers Bread, plucked from their thrift shop afterlife and reborn as an elastic groove that pops and snaps with mischievous glee. Plastic Anniversary also marks a quarter century of Matmos as both a creative and romantic partnership. Is there an avant garde electronic duo you’d rather break bread with?  I guess Chris and Cosey have got a lot more cuddly in recent years but, assuming your hosts to be like their music; smart, witty and approachable, dinner chez Matmos would be great. As long as they didn’t want to record you chewing or digesting or something.

‘Interior With Billiard Balls & Synthetic Fat’ is one of several tracks titled directly after their sources, allowing space for a purely formal focus, or a certain blankness perhaps. Beginning with the familiar clicking sound of billiard balls it moves steadily through changing patterns and textures before twisting into an upward stream of liquid bubbling sound. This balancing act continues across the record, holding on to particular recognisable moments and the weird alien timbres of the sources while at the same time relying on the infinite possibility of modern studio techniques to bend and reshape sounds to almost any purpose. Ultimately, despite the source, the sound is Matmos. There are moments and specific sounds that recall their ESP opus The Marriage of True Minds on ‘Silicone Gel Implant’ while the track is also an obvious a nod to their surgery sampling A Chance to Cut Is a Chance to Cure.

As far as Matmos goes there is nothing new or challenging about the music here, indeed following Ultimate Care II there’s an attempt to keep things bright, up tempo and accessible. Much of it could even work as soundtrack music for educational television although there isn’t anything as relatively ‘pop’ as ‘Very Large Green Triangles’. On the title track a calm opening section gives way to a triumphant parade and heraldic horns. ‘Thermoplastic Riot Shield’ is appropriately tough and combative, a clash of abstracted rhythms, alarms, and something that sounds like a straining drill. The sense of a march or parade is there again in ‘Fanfare For Polyethylene Waste Containers’. Its bright and repeating melodic line recalls Boards of Canada but the track has an undeniable edge beneath it’s pageantry, a darkness that leads us into the album’s closing section.

Quieter and more tentative than anything so far ‘The Singing Tube’ is a creaking loop that hovers anxiously at the edge of a full blooded groove but never really does until sharp whistle blasts announce ‘Collapse Of The Fourth Kingdom’. The Fourth Kingdom was a name given to the world of plastics by its early proponents. Grandiose it might appear but it’s also now undeniable. A joyful carnival roll that shifts and plays until its final minute when it does indeed collapse into sci-fi dread and insect clicks, the march of progress tripping over its own feet. The ghostly, ambient, closing track ‘Plastisphere’ confronts the idea of ecological disaster but is not entirely bleak. Plastisphere refers, to a degree, to adaptation, nature finding a way to live around and within all the crap we have dumped into the environment. Still, it’s a picture that probably doesn’t include us. The track has the texture of field recordings, as if they had mic’d up a plastic forest. Weather and bugs all invoked using the sounds of plastic and the plasticity of sound. Technically impressive, intellectually invigorating, this is the alchemical magic Matmos are able to weave. The sounds they have collected are mostly as blank as plastic fragments washed up by the tide, yet they carefully collage them into colourful and revealing tableau. Many happy returns.