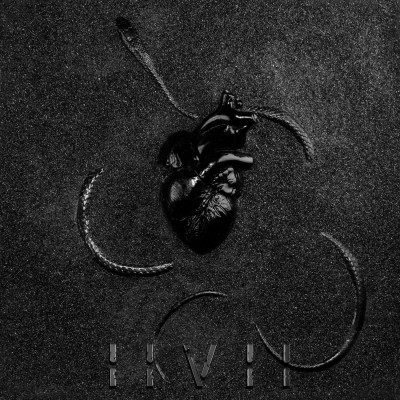 IIVII is an outlet for Josh Graham, a visual artist and multi-instrumentalist who creates cinematic soundscapes with elements of electronica, ambient and drone. 2017’s Invasion was widely acclaimed (not least by my fellow writers here at Echoes and Dust) and conjured a sci-fi vibe with its 80s electro combined with futuristic synth sounds that were partly reminiscent of Vangelis. New outing Obsidian is a very different beast, being far darker in its sound. Obsidian is a black glass formed from the intense heat of a volcanic eruption. It is timeless, dark and beautiful, and this EP shares those qualities.

The darkness of this EP starts with the cover, which features an anatomical relief of a human heart cast in obsidian, half buried in black sand, with a snake encircling it. This suggestion of danger hints at the music to be found within. The first track, ‘Octagone’, consists of a spare, brooding piano played sporadically amidst far-off echoes. The piano is overtaken slowly by an ominous swoosh of noise. This soundscape sets the scene for the remaining four tracks very well. One time I listened to this album while reading Alma Katsu’s The Hunger, a grim story about a group of pioneers crossing the Rockies in the 1800s who are slowly picked off by human creatures consumed with a hunger for the flesh of their kin. The music complemented the read excellently, adding a glorious chill, with the haunting sounds of Obsidian echoing the fears of the besieged travellers in the tale.

‘Meridian Passage’ features a haunting flute that calls out in a haze of swirling noise and drone. Played on a big system it truly fills the room: this is heavy music with a deep bass that adds to its vibe and feel. The dark drones that are a key feature of this EP recur to give it a strongly cinematic feel. That of ‘MineBlackHeart’ has a disorienting quality that continues for the whole track: there’s no light at the end of this particular tunnel, and you are drawn into it more with every passing minute.

Obsidian demands the listener’s attention. So much electronica (even very, very good electronica) can be used as background music: something to switch off to. Obsidian cannot be played like that, and is impossible to ignore. As such it provides a haunting soundtrack to your day – or night – for its full 34 minutes, and leaves its mark long after it has finished. Embrace it.