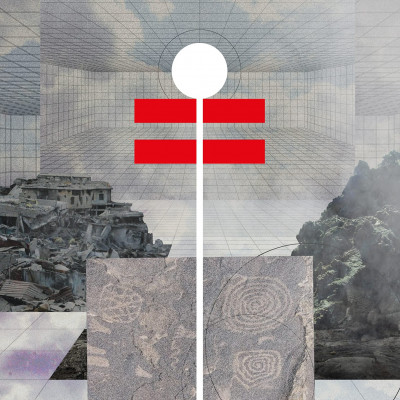 Echoes and Dust found the best writer possible to review this but, they’re busy, so instead, you get me. I fucking love Gum Takes Tooth. No other band can offer such spectacularly narcotic dinge. The first time I saw them I was hungover to fuck at ArcTanGent (I think it was 2015?), then I recall watching them whilst trashed at the last ever Bad Guys show and then surprisingly watched them sober for one of my first shifts at The Lexington as part of The Quietus’ run of 10th anniversary shows.

However, my favourite Gum Takes Tooth set has to be their performance at Rocket 20, which is easily the best festival I’ve ever been to. I’m fairly certain it was the night where I was getting gnarly after some mysterious powder and earlier in the night Jussi had kept me afloat with a beer after seeing me melting on my own at the main stage (I think my co-pilots, Jake and Dan had drifted off to the other stage for whatever was on there, I dunno) but, in any case they were wisely chosen to play after Goat’s headline set to make sure everyone was at their maximum level of intoxication. And from those great highs, our chosen delegates were plunged into the depths.

Gum Takes Tooth are band that synthesise sensory overload like a pair of mad scientists in a lab of mangled electronics, searching for some alchemistic El Dorado of sesh gremlin gold. They’re the friend that always pushes it a bit too hard but, never succumbs to the immense tides of psychotropic boundaries they’re surfing. To paraphrase Withnail and I, they’re like “taking a thousand transatlantic flights at once but, you’ve gotta get out ‘cause it’s crashing”. Relentless, chaotic and astoundingly indestructible but, above all daring…alarmingly so. They, like they’re innovative companions on Rocket Recordings, Gnod and Teeth of The Sea are exactly what music should be at its best, innovative, fearless and unmerciful…and as such that is exactly what Arrow is innovative, fearless and unmerciful.

Upon first listen, one may be surprised by the gently ominous nature of the opening track ‘Cold Chrome Hearts’, its tribal drumming and boldly distorted vocals slowly submerge the listener into another dimension, like receding from a harsh reality into a warm bath of escapism. In a society as depressing as ours, escape is paramount, be it books, video games, sex, drugs or literally running away to disavow everything that’s beaten your brow so far, harsh realities are not conducive to good times or fulfilled lives. I look at this political shit storm today and I want to bury my head in the pillow, stick my fingers in my ears, swallow a cornucopia of pills and say goodbye to this cold, unfeeling world; I like to think that is what the song touches on.

“You asked for more than cold chrome hearts.”

‘The Arrow’ soars out of the initial doldrums like the first breath of someone dragged out of the ocean. A sigh of relief. Entering a new atmosphere. Dazed yet delirious, we begin to feel alive coming up slowly from the abyss. Drums beating like a heart beat, twisted pulsations slowly coming to life, everything that was briefly suppressed beginning to take flight. The vocals are absolutely fucking amazing here, somewhat reminiscent of Nine Inch Nails’ more electronically focused and avant garde output. They’re so alien that if I was told they were sang from another galaxy and transmitted and converted for my tiny human brain to comprehend I’d believe it. The bass of the track is so soothing, almost purring, everything feels so bizarre and euphoric. It’s undoubtedly narcotic, lysergic even. It feels like perspective shattering. Each element shinning and combusting like neurological fireworks. It gets to a point where I’m no longer able to guess what instruments are being played, all I know is that each facet of this song is being executed to a mesmerising perfection. I feel the waves of endorphins engulfing me like I’m right there in the room with countless strangers, faceless in my expedition to Gum Takes Tooth.

The beat goes round and round. The beat goes round and round. ‘No Walls, No Air’ continues to drag the listener into chemistry, it feels like being reduced down into a formula and thrown into a test tube. We’re the dummies, we’re the experiments. The hallucinogenic synths and vocals, stray further and further into uncharted territory, it is only cause I am safely at home that I believe none of this is psychosomatic. By this point ‘Arrow’ is already the most unreal thing I have heard since Aphex Twin. It is completely astounding. The drums, the synths, it’s so euphonic and acidic that it actually makes me fucking salivate. Everything undulating and pulsating, the production work at a constant perfection. I can’t describe the awe I feel listening to it. Fuck it.

‘Slowly Falling’ brings us little space cadets into a clearing. The synth lines resonate as widely as they can, everything slowing down. It feels almost reptilian. I feel like I’m back in my university home in Liverpool tripping balls alone at 3AM, I can hear the beat of a flies wings, I can taste the tungsten of the lights outside, I can feel each molecule of air moving like I’m a part of it. I rescind into pure data, becoming binary, becoming information total erasure of the self, peaking hard until I snap back into life.

‘Borrowed Lies’ feels from the offset what I imagine could be a good Gum Takes Tooth single, it has a lot of immediacy and isn’t so mindfuckingly ineffable that normies might be able to get their first taste of wacky world. The synths and guitars (?) still feel like someone taking existing and scrambling it into little shreds in their hands but, the vocals are discernible and the drums are back keeping things tribal. When that dude drums my heart feels like the little engine that could, pounding away extremely fast with a Charlie Brown expression on my face, the spirit is willing but, the mortal faculties are decimated. I struggle to believe that human beings are actually able to make sounds like this. It’s so fucking face-melting. Unless you’re Aphex Twin, part of Gnod or in Stars of The Lid consider yourself on notice, this is true genius. How the fuck do you even set about creating sounds like this? This is music that makes critical analysis by literary means utterly superfluous and redundant because as far as I can tell no amount of words is going to really explain how much of a mind bending record this is. I feel like it takes a far more advanced musical mind for production than that which I possess to process this thing.

What in the fuck is ‘Fights Physiology’? Those rhythms are fucking unrepentantly relentless, the vocals once again sound like something from a martian spaceship. They remind me somewhat of Teeth of The Sea’s flawless ‘Master’ record. When I hear something as advanced as this it feels like comparing 2001: A Space Odyssey to other movies I consider amongst my favourites, it’s like “yeah, sure, this movie is really well written, shot, acted and directed, but is it decades ahead of its time in terms of innovation, whilst being masterfully brilliant at everything I usually enjoy about this art form?” Fucking Gum Takes Tooth man. We always we knew they were essential view on any billing but, anyone thinking that this review is hyperbole, let me tell you this, first of all, I’m a very dramatic person who loves music and secondly, fuck you, this is fucking amazing, listen to it with a good pair of headphones in the dark and tell me it’s not one of the best albums you’ve ever heard. Even the use of impeccable transitional tracks to seamlessly segue the album together is just fucking amazing, it always feels consistent and so well-thought out and meticulously crafted. It’s just fucking astounding.

Interestingly, ‘Seizure’ and ’A Still Earth’ feel like companion pieces to ‘Cold Chrome Hearts’, like the band are giving the listener some time to breathe with the knowledge that what surrounds the track is utterly brain warping. Although, by this point they’re definitely winding things down, easing off the chaos, lightly descending us into the afterglow of the initially overwhelming trip ‘The Arrow’ took us on. Perhaps they’re touching base with home so, we can be blasted further out to space. Yep. ’House Built of Fire’ is an 8-minute assault on the senses showcasing every magnificent facet of this absolute masterpiece with aplomb. Everything element of ‘Arrow’ is fucking radical; it’s a game changer, a head scratcher and a fucking tour de force. This is a record that you listen to when you’re ready to dive into the deep end and explore the unknown. It is yet another chapter in yet another year of Rocket Recordings bringing you the years most essential, groundbreaking listening and makes a fine addition to Teeth of The Sea’s WRAITH as my strongest picks thus far for album of the year, at the very least. Not only is it a step up from Gum Takes Tooth’s previous record, it feels like an album that should put every musician on notice; I may not be qualified to say it but, this is how you make something truly extraordinary. Fucking hell.