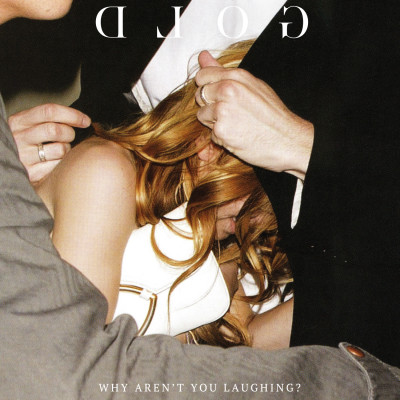 Why Aren't You Laughing? by GOLF

GOLD reappear with Why Aren’t You Laughing?, an accomplished and darkly personal record serving as the anticipated follow-up to their breakthrough The Optimist.

It’s an intense listen, led by lyrics seemingly dealing with a range of constricting emotional responses to trauma: transfers between wriggling escape attempts and deadened listless anomie… anxious negotiations of rage threatened to be overwhelmed by either its expression or suppression… disassociation from your own alien body as an enforced precaution against ill-defined psychological dangers…. brittle clutches at moments of tenderness and affection, trying to insulate them from lingering poison.

The artwork has a visual aesthetic reminding me of Skepticism, but rather than the slightly sardonic dinner jackets and bow ties of the funereal Finns, this is more disturbing: fancy suits hinting at an uneasy sense of coercion and mannered cover-ups of intimate nastiness. The album is frontloaded with the immediate catchiness of ‘He is Not’, with its hook line “I put one foot in front of the other” deftly communicating the numb bodily automatism encased within what might be a statement of resistance and will to keep going. Lines like “I allow myself to follow my body” later in the same song, or “I find it hard to sit still I find it hard to move” in another express other facets of physical response to psychic storms. These are in some places baldly stated: ‘Things I Wish I Never Knew’ as a song title, and to brilliantly dramatic effect in the title track, which could be subtitled ‘Things Men Say To Women Repeated Back To Them To Highlight Their Harmful Idiocy, With Added Menace’… not revenge fantasy but just cold exposure. OK maybe a bit of revenge, in the chorus “Why aren’t you laughing” and particularly the line “Would it kill you to smile?” has extra hidden knives.

There’s a trademark cycling effect that appears in a couple of spots, where in repetition the beginning fragment is tacked again onto the end of the phrase, refracting new odd light through a familiar slogan: “There is no way out there is no way”; or “Would it kill you to smile would it”. The effect is a sort of obsessive tic where your place gets lost or sense itself escapes through dizzying, emptying reinscription. Another aspect of Milena Eva’s vocal delivery is the despondent adherence to a melodic line, as if dragged along while preoccupied with other intractable concerns. It communicates a kind of devastated numbness, a self-cast spell of anaesthesia against human horror… restart in safe mode to protect files and processes. Which is not to say its devoid of feeling, rather that it perfectly expresses a state of mind stumbling to go through the motions while processing other impacts; and perhaps too, suggests how music itself can be a support to just keep you ticking over in the face of derailing crises. Throughout, in lines like “words escape my mouth”, or “I don’t reveal I’m not OK”, the body and language become weird strangers that you’re nevertheless forced to inhabit.

Musically there’s a lot of moves from the heaviest of post-metal and post-punk schools, all tightly controlled in service of the doomy, gothy song-led sensibility. The tremolo strumming keeps everything dramatically on-edge, a palpable nervous energy that pervades an introspective sonic world rather than a trademarked grim mythic obscurantism of its use in black metal. Elsewhere there’s an assured metal-clang-in-empty-factory sense of space, and a shiny shimmering of starling-cloud guitars in ‘Please Tell Me you’re Not the Future’ heralding the gathering sonic storms that break and swell throughout. In the final track, the peaceful night-generator hum is a calming counterpoint to the nailbiting and nausea in the rest of the record. There’s echoes of Joy Division’s gloomy shuddering tremors, most of all on later track ‘Mounting Bitterness’ with its “Twenty-Four Hours” style sombre jangle. The music is so song/melody/lyric led that it might be overlooked but the album has such a tightly-wound heavy impact.

A powerful statement both personal and timely, the album deals with complex and important realms of vulnerability, difficulty, accountability, and our responses and responsibilities, all in the sweeping, brooding goth drama and heavy impact of their baroque pop songs. 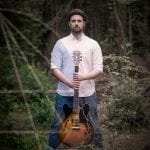 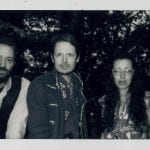