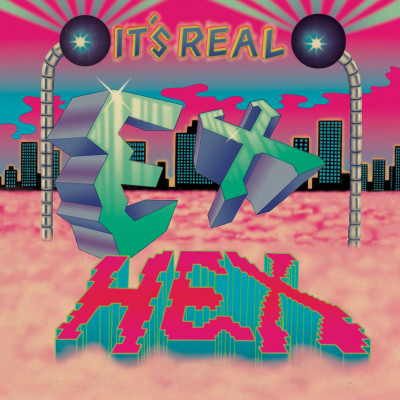 It's Real by Ex Hex

Just now, warm carefree days in the park might still feel a little distant but this is a wonderful summer record to transport you to a fantasy of it. The flawless, imaginary, eternal summers of teen movies and fading memories. Oh, it’s so shiny. Sleek and gleaming like an airstream trailer in the afternoon sun, intoxicatingly elegant. It has a kind of perfect, crunchy, early 80’s power-pop-punk sound, everything up front but with space and light around it, hard and bright and clear like crystal. It’s Real is the joyous second album from DC power trio Ex Hex.

We all know how we shouldn’t judge a book by its cover but, at the very least there’s usually some basic helpful information on there. The cover of It’s Real could hardly be more artificial. A dated chunk of computer graphic modernism in queasy colours that calls up old arcade games and Miami Vice, the band’s name contorts in awkward 3-D lettering before a distant skyline. It’s pretty ugly to be honest but to its credit, like the record, it is vivid, energetic, polished and charged with a particular mix of cultural energies. It also sits in perfect relation to the cover of their debut Rips which was also brightly coloured, prominently featuring the name and title. As with that record it had a warmer more hand made quality to it. This time Ex Hex have gone all out, taking production tricks from arena rock and hair metal to give their songs a glistening machine tooled power. There are layers and layers of vocals and the guitars sound absolutely huge.

If you loved Rips you shouldn’t let this put you off. Received wisdom around garage bands cleaning up their sound is that it’s a bad idea for a number of reasons. The first is that they don’t really want to do it and so the results are underwhelming. Another is it exposes weaknesses in their playing usually kicked roughly aside by energy and distortion. The most pernicious is an article of faith around lo-fi authenticity, that polish just isn’t rock ‘n’ roll. None of them hold water here, Ex Hex have run toward this idea, embraced it with enthusiasm and dug in to explore its possibilities. Mary Timony is an incredible guitarist who does not let her ability get in the way of the simplest most direct music of her career and, most importantly, their motivation springs entirely out of a belief in the magical power of rock ‘n’ roll.

In 1981 The Go-Go’s wonderful debut Beauty and the Beat landed. It was the number one album in America for six weeks, Mary Timony was 11. I guess Betsy Wright and Laura Harris were about the same age. I don’t know what impact it had for them but this album suggests it was important. It’s not a copy, tribute or reinvention of it but there’s something in their spirit that links them for me. There are other reference points aplenty – Cheap Trick and The Runaways, sometimes Pixies or Throwing Muses, Girl Groups and The Ramones. Every memory is a reimagining.

There’s a reductive rock ‘n’ roll language to the song structures and chord progressions here but Ex Hex are fluent native speakers. They have not gone ‘back-to-basics’ but use the basics to go forwards. Leaning in to a tradition they grew up with, like the best bands they make it their own by scrubbing a little away and adding a little to. They walk a fine line keeping the jolts of nostalgia and pastiche from submerging things. Lyrical images repeat across the album; rainbows, diamonds, good times, mostly avoiding cliché although everyone gets called baby and you can’t help thinking ‘left me alone with the good times while you brushed your rock ‘n’ roll hair’ made them laugh when they wrote it. On my first listen to this, about half way through I was thinking they had really nailed an amazing sound but maybe they didn’t quite have the songs to carry it off. By the end I wanted to put it straight back on, there’s hooks a plenty, they’re just not shameless about it. If you don’t swoon for the glorious chorus of ‘Cosmic Cave’ when they press down on the accelerator and Timony implores ‘Oh baby, come on and dance with me’ then I fell bad for you and your cold empty heart. Diamonds and rainbows, oh yeah.