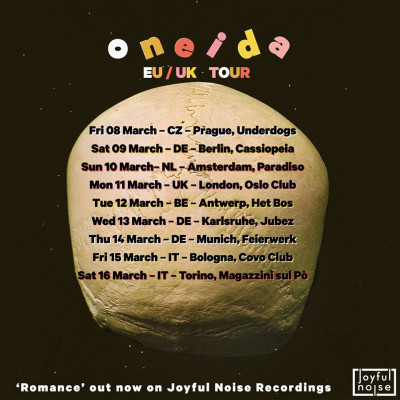 Oneida and Mugstar are arguably two of the biggest influences on the modern psych scene. I grew up in a town called Birkenhead, across the river Mersey from Liverpool; in my late teens, I first heard of Mugstar, checked them out and didn’t get it. A few years later, during my time in university, I began writing for Echoes and Dust and simultaneously became a Rocket Recordings fanatic; bands like Gnod, Hey Colossus and Teeth of The Sea became the majority of what I was listening to, and I became engrossed in modern psych music, psychedelia and a culture of exploration that all seemed to appeal to who I always felt like I was, but had never really found in one manifested home. I moved to London, went to Cosmic Carnage and Baba Yaga shows (*note* this show was another excellent show by Old Empire, I haven’t been to many of their gigs but, I’ve really enjoyed the ones I’ve seen) and I started to dig deep into whacked-out beatnik music left, right and centre. Just when I started to feel like I had a good grasp on things, I remember hearing Oneida’s ‘Each One Teach One’ for the first time, and instantly considered it one of the best things I’d ever heard. The splintering, sulphuric guitar lines that sound like an intricate web of wires burning in some android cerebrum, the disembodied vocals slurring a simple message, the frenzied chaos and controlled fury of each storm-like fragment of music, slamming back and forth between thunder and lightning – it is a fucking astounding piece of music.

Similarly, I remember discovering ‘Today is The Wrong Shape’ by Mugstar and getting totally blown away by how good it was. I began listen to albums of absolutely stupefying music by both bands, and getting that rare jolt of excitement and elation that you only get when you find something new that you actually love. It seems to become harder and harder to find. But, prior to this gig, I noticed Cosmic Carnage premiered a new track and a strong endorsement for We Wild Blood; I was apprehensive and sceptical at first but, I have to say, I think I’ve got that feeling again.

I decided that before this show I would eat a fairly large portion of a space cookie, due to the cosmic, psychotropic nature of the music that I would be witnessing. Besides, I like cookies, so it seemed like a good idea. So, I get to the show alongside my girlfriend Veronica and my friend Rory and it’s fairly dead to my surprise; we get beers and go and stand at the front for a fully face-melting experience. We Wild Blood start to play and again, at first, I’m expecting to be disappointed but, within about a minute, I was totally fucking sold on this band. Each member contributing lead vocals when appropriate, each instrument highlighted when desired. I haven’t seen too many bands really eschew the format of a front person without the band being an instrumental group; probably the best example that springs to mind for me is Charismatic Megafauna, who will rotate everything.

However, I think the drummer was my favourite of the the three vocalists. That dude could fucking drum the bricks out of a wall; he was fucking amazing, he was drumming so hard that sticks snapped into the crowd and Veronica kept a piece, it was fucking nuts. All the while, he was singing and screaming whilst drumming at a level I’ve only seen at Taman Shud gigs. Part way through the band’s set, things started to get a bit wonky and my perception of time was slowing. We Wild Blood jammed in every which direction and I found myself totally in awe of them. They’re certainly the only band I’ve seen where the bassist plays by punching the body of the instrument. I thought they were so fucking incredible that when they finished I forgot I was there to see other bands; it kind of reminds of when Sex Swing played with The Body and Lightning Bolt (which was also fucking stupidly good by the way) – so rare to have a line-up for a gig where every band is fucking spectacular and a headliner in their own right.

Mugstar sucked me into a wormhole and spat me out. Just google Transdimensional Space Goat to view an accurate depiction of my face as the band played. The room was fucking bending, it felt epic in the most literal way. Like transcendental. It was as though my entire life was me standing in that room in that moment, and it was absolutely incredible. It feels like such a pleasant contrast to the increased level of responsibility and sensibility I have to adopt as I move further into being a grown-up person: that I will always love more and more things; that I will have more memories to fall into; that I will have new favourite bands and live bands, and favourite gigs and TV shows and whatever other shit gives me joy. It’s not often you get to say it but, I like to when I can: Mugstar are one of the best live bands I’ve ever seen. Truly awesome. Totally mesmerising.

After Mugstar, Veronica told me to get some beers whilst she went for a smoke. I obliged, then stood at the entrance of the room leant against a wall. By this point, I’m so baked I can barely stand up. I realise that I’ve been stood here before, or am I just whacked? Then I remember, I came to this venue to watch Grails before, and again, I was fairly out of it. I leant on the same palisade and realised here I was doing the exact same thing again. We regrouped and found ourselves stood before Oneida. I don’t know who any of the guys are in these bands by name, bu, I feel like in a way that’s the point; all three of these bands seem beyond the self-centred allure of music in favour of making batshit aural explosions and self-deprecating jokes. Each member of each band playing having equal prominence, everything feels collective and communal; it makes me revaluate the way I naturally appraise bands when I gravitate towards a front-person or a particularly spotlighted instrumentalist. Watching them makes me feel like they write as a group, play as a band and have fun with no mind for any of the bullshit that comes with music; as though the industry didn’t exist; like they’re just riding a wave. I know that’s pure idealistic speculation but, as an idea, I feel like I really gained something from this show. Egodeath is not just a psychedelic effect that psychotropic substances give the human mind, it’s also something psychedelic music can do to an art form plagued by industry as culture to commerce.

When I think of Oneida, I think of a whole band, rather than who I think “the main people” are, as idiotic as that sounds to me now. And I think that’s great. One of the band’s guitarists, approaches the microphone; I don’t know if he’s intentionally styling himself after Homer Simpson or if I just think he looks really similar ‘cause I’m zonked out. Though the gig was taking place on a Monday, the dude asks the crowd what day is it today; one or two people shout back “Friday Night” – I feel like I’m new to the game. The dude, I’ll refer to as Ho-neida for reference, responds “Friday Night” and, straight out the gate, the band fires ‘Each One Teach One’ at us. Veronica and I beam with glee and get cute; I feel like I’m witnessing one of the wonders of the world. I can only compare it with seeing Gnod play ‘Bodies For Money’ for the first time, though, ‘Donovan’s Daughters’ at Rocket 20 was probably the best thing I’ve ever experienced. I remember how awesome it was when Anthony Chalmers from Baba Yaga’s Hut let me play ‘Each One Teach One’ at that festival, and thinking it was so awesome to hear it live because I figured with Oneida being American, they’d probably not play many shows here; and if they did it’d be massive shows on a Friday (I work all weekend every week) that I probably couldn’t afford.

This gig was a fucking a dream come true, and seeing that song live was a fucking check off a musical bucket-list. I’m not well-versed enough in the band to name the other songs in the set, the only songs I actually know the names of are the top five on Spotify, which I hammered the most; but with that said, they delivered a consistently excellent barrage of music and a rare example of actually enjoyable stage banter that I want to experience more of; and the reason I came was. after all, to delve further into this band that has been glowing in my brain for so long.