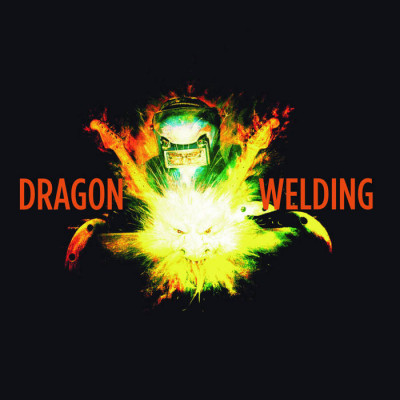 C86 Indie pioneers, Wolfhounds, have always had an experimental edge – check out Another hazy day on the lazy A, Restless Spell, Fire in the Home- so it is no surprise co-founder, co-songwriter, guitarist and multi-instrumentalist Andy Golding, releasing his debut solo album under the moniker of Dragon Welding (well done, anagram spotters) boasts a broad palate of ideas. Suddenly finding himself with some substantial free time due to long train and plane work journeys, Andy G took a few leftovers from the recording of Wolfhounds 2016 critically acclaimed Untied Kingdom album and expanded on them with an I-phone and Garageband tools at his disposal (for the full story, see the Andy Golding interview) to craft an album which is a box full of surprises.

In Andy’s own words the making of Dragon Welding was ‘”playing around with guitar loops”, betrays the diversity it offers, as it is a minefield of shapeshifting tempos, repetitive drones and multi-layered soundscapes, songs and instrumentals. But even when it is at its most off-kilter or in the deep throes of serious instrumental droning, melodies still find their way to the surface and float. There are plenty to engage in, and with repeated listens there are many depths for the listener explore.

The loud, intense repetitive anxiety filled clanger of ‘The Builders’ will frazzle, and takes some time to adjust to its cacophony attack. But once acclimatised, the gliding vocal melodies emerge, and contains Andy’s familiar tremolo charged guitar assault, which are always excitingly purposeful. It is possibly the album’s centrepiece, reflecting on the regeneration of our cities. In fact, the overriding sense of mood throughout is paranoia, and an impending claustrophobic sense of dread. So, while it was written and recorded a couple of years ago world events have only heightened this fear and anxiety of where the world is heading.

Varied, and imposing a contrast of styles help to maintain a thrilling consistency. The galloping motorik drive of ‘Join the dots’, the guitar strumming urgency of ‘These dangerous times’, the guitar layered drone of ‘One miserable summer’ to the sparse harmonising guitar interplay of ‘bucket list no.2’ as Andy desires a retreat, “I want to be invisible, disappear inside my mind.’ As for what has emerged from indeed Andy’s creative mind, spilled out across the eleven tracks are the adventurous playground ethos of Can, Neu, Moonshake, Stereolab, The Notwist, and of course Wolfhounds.

But what appears after repeated listens are Andy’s well-crafted melodic vocals, aided by his daughter Alice and son James (while the cover was conceived and painted by Andy’s wife Helen), which softens the head-heavy giddying soundscapes and injects melodies that sweep and worm their way in over time. Dragon Welding is one of those albums which the more time and effort you put in, allowing yourself to immerse inside its textures, the more richly the rewards. One can only hope Dragon Welding is no one-off.