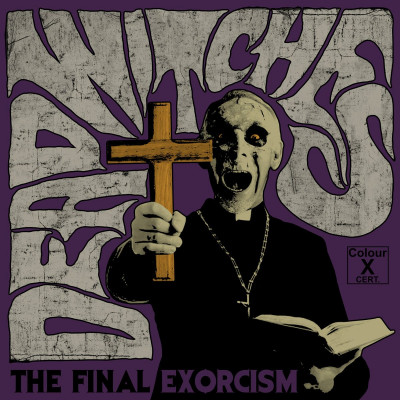 The Final Exorcism by Dead Witches

Last year’s London Desertfest appearance introduced the current line-up of occult doom noise merchants Dead Witches to the scene. And they blazed epic sized proportions of loudness through the Camden Underworld’s very capable PA system. With the release of their sophomore album The Final Exorcism, it is the first to feature those new recruits of vocalist Soozi Chameleone and guitarist Oliver Irongiant (also of Sea Bastard and intense progressive shredders Grave Lines). They have joined long-term bassist Carl Geary and founding member and drummer Mark Greening (formerly of Electric Wizard). Setting up shop in Dorset’s new Forest at the analogue equipped Chuckalumba studios they set about having a go at conveying their volume shredding ferocity onto a record.

And boy, they give it a good go. As The Final Exorcism sees the new recruits stamp their characteristics all over it. Oliver’s all-consuming tar like, fuzz soaked guitar sound threatens to decimate the surrounding woodlands, so it takes a determined, gritty performance from Soozi Chameleone to muscle in and compete with gutsy success. The whole band collectively create a loud, dense smog of a heavy blast of fuzz drenched doom metal thunder, which captures the band’s full force of nature. Be warned though, when not in the right mood it will drain your blood, and don’t expect cheery hummable tunes for drying the dishes to.

However, when in the mood for some imposing heaviosity, the title track is a roaring beast as the band swat away everything around them and stick their (un)holy flag in the New Forest soil. The wah wah infused ‘Goddess of the Night’, ending with haunting organ, is the sound of a band in commanding control as Soozi threatens “I wander through the darkness, the darkness of your mind.” Yep, they’re out to terrify. But it isn’t all fiery abandon, as ‘When Do the Dead See the Sun’ sees the band display a meaner restraint and give 60’s trippy psych a darker vibe.

Largely an album where the riff rules, ‘The Church By the Sea’ just might boast the album’s mightiest as well as possibly Soozi’s finest vocal performance. But, saving the best for last, the ferocious ‘Fear the Priest’, 9 minutes and 29 seconds of explosive, demonic progressive sonic doom sees Mark Greening’s thumping rhythms give it a considerably extra pounding weight. And as it ends you can hear-the sound of the amps still reverberating furiously and the studio’s foundations shaking violently, while one can only imagine felled trees and total devastation surrounding them as they packed their van and departed.

While the album title expresses the notion of termination, let’s hope that isn’t the case because this sounds like a new beginning for the band, which The Final Exorcism indicates there is a lot more to come from Dead Witches’ bruising, brutal brand of dark doom.