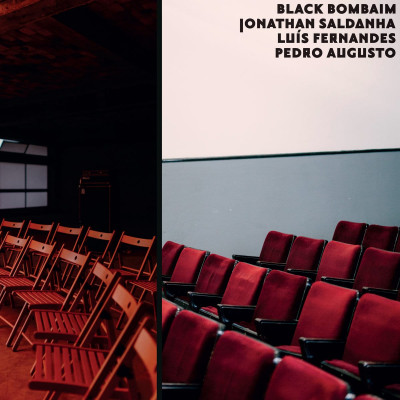 One of the more intriguing aspect of Black Bombaim is their capacity to collaborate with others to create truly exploratory music quite unlike anything else you will hear. The kind of band who would be known as the “musicians musicians”, they blend psych, free-form jazz, space rock and dub into ever-changing moulds with every release. Here, with their new self titled release, they collaborate with electronic composers Jonathan Saldanha, Luis Fernandez and Pedro Augusto to explore that line between psych and electronic music, delving deep into regions they have never prodded before. Did we say deep? Yes…extremely deep.

Minimalist in many respects, and spread over four sides, it takes a lot of patience to sit through, but once you treat these tracks more as pieces, than songs as such, you start to hear a template of glorious experimentation. By taking their time, Black Bombaim and co manage to open up an ever blossoming flower of introspective searching. It’s the kind of sound which could only happen in the deepest reaches of space, or the mind for that matter. You can go outward, or inward, this music will take you there.

The forbidding drone of ‘Zone of Resident Bodies’ introduces that minimalist aspect to the album, and as the record proceeds you find yourself forever drawn to the beats that lie beneath the surface. There may be all manner of experimental space noises as we progress, getting steadily more intricate, as heard on the final trio of tracks, but that insistent beat that begins the album serves to keep us within the realm of the blank palette. Allowing for the music to build up or poke and prod brings an urgent experimentalism, and as the music washes over you, there is a sense that this is much more a journey, than a series of linked pieces.

Naming the tracks simply as numbers for those last three pieces also removes any semblance of imagery and we are left with our own minds, which by this point have been well and truly displaced, to try to make sense of what we are listening to. Like some sci-fi industrial space rock exploration, the listener may choose to conjure up bleak dystopian cityscapes, or they may simply imagine the space between the stars. It’s all up to you, and where you want to go.

It’s this brazen experimentation which makes this album so remarkable. Making no reparations to an easy listen, it is an album which needs to be taken in as one piece. Either in your head-space through headphones, or roaring out of your speakers, each listen will conjure up a different experience from the one before. Black Bombaim always reached for that space just beyond the stars, this time they thrust onwards into the unknown dragging us along as willing recipients. It’s only early days but already this stands as one of the finest releases this year, and undoubtedly will stay there as more and more listens reveal ever increasing spaces of your mind.