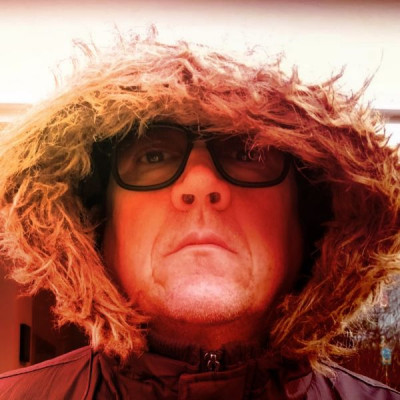 Dragon Welding on the web:
Bandcamp |

''Lyrically, a lot of it was written at the time of the Brexit referendum and Trump winning the US election, so the paranoia and anger are probably about as current now as they were then. Its time is now.''

You’ve had many projects outside of the Wolfhounds over the years, but this is your first solo album. How did the idea take root?

”I had been working on tracks for the last Wolfhounds album, Untied Kingdom, at home and there were some left over ideas from that time. Rather than just leaving them under the bed gathering dust, like I usually do, I carried on working on them. After a while it began to sound like a thing that stood on its own so I decided to actually finish it.”

While the songs are still rooted in song structures, it has an experimental heart, a lot of varied sounds swooshing around – repetitive drones, multi-layered textures, spatial folk stylings – many tracks on the album don’t sound like they were first- written on the instrument you are more associated with, guitar. How did you approach the song-writing for this solo project?

”I wrote a lot using my iPhone. Most of the songs here came out of electric or acoustic guitar loops that were recorded directly into the Garageband app. I was doing quite a lot of travelling on trains and planes at the time and found that playing about with guitar loops was a great way of passing the time. I had set up a toy drum kit in my house and recorded that directly into the iPhone as well, so most of the drums are from live acoustic loops. From there it was just a matter of playing about with the loops and effects until they sounded interesting. I then sucked everything into Logic and tidied it up with Ant Chapman (Collapsed Lung). I wrote most of the lyrics after the music was finished, which is the opposite of how I usually write, so it was an interesting process. Some of the tracks didn’t really need words, so I left them as instrumentals.”

Who provides additional vocals on ‘One miserable summer’? And, are there any other musicians involved in Dragon Welding?

”My daughter Alice sings with me on that. She is a Wolfhounds veteran now, having sung on both the ‘Middle Aged Freaks’ and ‘Untied Kingdom’ albums. My son James also provides some of the vocals as well. Together, we have nearly finished another album of songs I wrote with them both. Alice sings lead vocals on all of those, and James plays most of the instruments. Letting songs go at an early stage of writing and letting my children develop them was a whole new ball game. They are far more talented than me.”

I believe you made the video to ‘The Builders’. How was that constructed?

”I had previously made videos for the Wolfhounds ‘Skullface’, ‘Divide & Fall’, ‘Middle Aged Freak’ and ‘Slide’, but I’d never tried to animate before. I had to use the limited tools that I had available to me, so I started by taking a lot of photographs on my various commutes and tourist trips around London. Once I had started to manipulate images on my iPhone, I stumbled upon an app that let me stretch and distort still photographs. From there, I realised I could string them together and make them move, like in the ‘flick books’ we used to make on the corners of exercise books when we were kids. It’s about as low tech as you can get, but it was a lot of fun making something active from static sources.”

Were there any key musical influences which were fed into Dragon Welding?

”I was just playing about with sounds and this is what came out. When I started trying to make music using ‘modern’ production techniques, it was in the 90’s. I spent a fortune on sequencers, samplers and digital recorders. It was all very cumbersome and a bit beyond me, so much so that I went out and bought a banjo, which was much more fun. These days, with the addition of a half decent microphone, you can literally do almost everything you need to do to create music on your phone. When travelling around London, I find it’s a far more rewarding pastime than reading The Metro or The Standard. I can make up my own rubbish just as well as they can.”

The album was written and recorded a couple of years ago and was due to have been put out around that time, but is now getting a record label release in February. What is the story behind this?

“It kind of fell between the cracks when Odd Box went offline. I’d almost forgotten about it, but I sent it to ‘A Turntable Friend’ (who released the Wolfhounds John Peel Sessions LP) and now it’s alive again, which is very pleasing.”

Now listening to the album, a couple years on from writing and recording it, what are your favourite tracks? What are your feelings towards it?

”Lyrically, a lot of it was written at the time of the Brexit referendum and Trump winning the US election, so the paranoia and anger are probably about as current now as they were then. It’s time is now. I think ‘These Are Dangerous Times’, ‘The Dumb’ and ‘Lament for Common Sense’ are pretty accurate.”

Do you for-see yourself continuing the experimental soundscapes you touch on in Dragon Welding? For example, the closing ‘Lament for common sense’ has the call for film soundtrack beaming out in neon lit colours. Would you be open for film soundtrack offers? Or/either pursue recording a full-on instrumental drone, American minimalist esque inspired concept album in the future?

”I’ve already finished another album of instrumentals that were recorded using similar techniques, so I’m hoping to get that released soon after. I’d like to try and do some of it live, but watching people play iPads can be a dull spectacle, so I’ll need to work on that a bit. I’m also working on the soundtrack for Spielberg’s “Jaws 5” with Brian Eno and Steve Reich, but it’s a fairly-secret project so I’m not sure if even they are aware of it yet.”

Have you been involved in other music related projects recently?

”I’m still writing a lot of acoustic songs that I play live every now and then, plus I need to finish off the two albums I mentioned previously. I’m never bored, but like most people who are not full-time musicians, I just never seem to have enough time.”

And, what is happening at-the moment in the Wolfhounds camp? What are the band’s plans for 2019?

”We have five or six tracks already recorded and another three we are ready to record. Dave (Callahan) has a few solo things coming out as well, so there is plenty going on. Hopefully Wolfhounds can finish the next album in the spring and have it out before the end of the year. I think the last album was the best thing we have done yet, so the next one needs to be even better. I think our internal ‘quality control’ is greater than it has ever been.”

Dragon Welding is out on the 15th March via A Turntables Friend Records. Wolfhounds play Green Door Store, Brighton 27th April and Lexington, London on 26th May 2019.