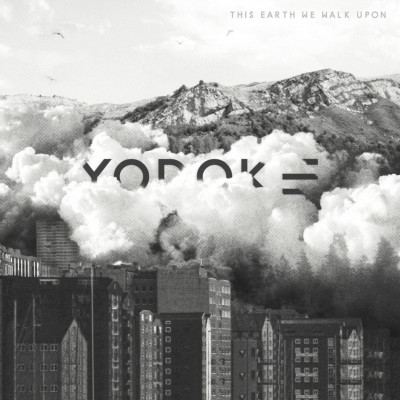 This Earth We Walk Upon by YODOK III

A ritual clang, a gentle bell mark the opening of this stately and vastly unhurried piece of sombre but calming drone from YODOK III. The single-track album is called This Earth We Walk Upon, and at 63 minutes that global idea is the kind of scale we’re talking about: there is an encompassing hugeness to the geologic development from near-silence to sweeping tectonics.

After the opening feet-shuffling, there’s almost imperceptible build to electronic horizon wisps and a reedy, breathing drone like an accordion in a coma. Here and there there are some faint elephant phurps and some arctic horn squiggles, their sounds misted around the edges as if in thick dawn fog. Some spindly typewriter tap-tap-tapping on the temple door evolves into a ruler-on-a-radiator rattling which eventually rustles up slowly towards the chordal set piece. It puts a listener in mind of some other hour-long spectacles like Corrupted’s El Mundo Frio in its utter resistance of rushing (though without that record’s colossal ice-shelf drop), or Hypothermia’s Skogens Hjarta in its extended alternation between two tones, an insistent seesaw meditation on their relation (though here we get much more tonally complex).

It gets more roaring and thrashing around for long passages nearer the end, though perhaps strongest is the first third, where something grand gathers itself irrepressibly from delicate beginnings. The icy guitar whorls are matched with brilliant low muted horns, sounding like whalesong sonar or like restive gulls wheeling over pastel clouds. A shuffling metronomic 4/4 beat arises and gathers energy for a full 20 minutes at the end, outlasting even the now swirling screeching tones, a relentless flight into the heart of a storm.