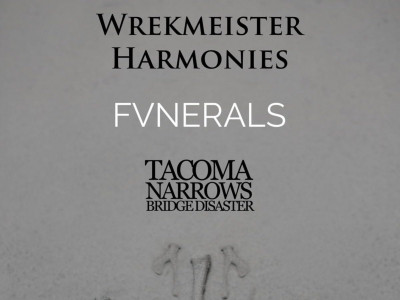 Tonight’s show, courtesy of London promoters Chaos Theory, brings together an expertly curated selection of space-prog and dream-doom in support of the inimitable minimalism of Wrekmeister Harmonies. Recently celebrating their nine-year anniversary, Chaos Theory have garnered a reputation for promoting exciting new bands and subtly shaping London’s underground music scene in the process. You might buy the ticket for the headliners but you can trust that the support will be well-chosen, perhaps challenging, but always quality. Or you might just come along to a random show to check out some new bands, knowing that the CT hand-stamp is a marker of quality.

And tonight is no exception. First band on, Londoners The Tacoma Narrows Bridge Disaster, meld the best parts of post-rock, riff-driven instrumentalists like Pelican with hints of Oceansize and numerous purveyors of space-soundscape metal. When thick chords open out into expansive ambience, a solid and dynamic bass-presence always keeps them firmly grounded. ‘Truth Escapes’ is one of the few songs with vocals tonight (perhaps the only one – I did unfortunately miss a few minutes at the start) and – while it’s certainly a stand-out with its complex-yet-catchy prog-riff, reminiscent of 10,000 Days-era Tool – I don’t recall the singing as well as the rest of the music. Maybe on record it’ll make more sense. Overall, the best thing about The Tacoma Narrows Bridge Disaster is a sense of fluidly kinetic songs that are constantly moulding and re-moulding in an unpredictable fashion, but which are ultimately always unified and tight – a promising and colourful screening of sonic cinema.

FVNERALS, Belgian-based by way of Brighton, also tick many strong musical reference points for me, most notably the new wave of US doom bands like Chelsea Wolfe and King Woman, as well as the comparable Brit/German band Esben and the Witch. I caught FVNERALS a couple of years ago supporting Emma Ruth Rundle and Jay Jayle, and I recall their convincingly heavy mixture of brooding ambient-doom-gaze well. I enjoy them again the second time around, getting lost in their gravelly guitar tones and moody organ interludes – but, I have to be honest, I’m yet to be blown away. Perhaps it’s because Tiffany Ström’s vocals get a little lost in the mix – a shame because a combination of husky, Mazzy Star insouciance and Kristina Esfandiari-esque low eeriness is exactly what I like with my doom. They’re a gripping, tight band that’s great to watch but could perhaps break out further from their influences to truly peek my interest. That said, I intend to see them again and, if any of the above sounds good, then you’ll want to be doing the same.

The name Wrekmeister Harmonies, a reference to a Hungarian art-house film, perfectly captures the oxymoronic and chameleonic nature of this “sound art project” whose six albums of dark and eclectic music defy easy categorisation. Known for their extensive collaborations, Wrekmeister are equally at home playing noir-folk with Marissa Nadler, extreme metal with Jeff Whitehead from black metal act Leviathan, jazz composer Ken Vandermark, and a host of other styles with a host of other underground luminaries, without ever sounding like anything but themselves. Furthermore, they’ve brought their unique sounds to prestigious and unusual venues such as the Guggenheim Museum, the Pompidou Centre and even on the famous Golden Gate Bridge, captured in their release Recordings Made in Public Spaces, Volume 1 from 2009. And few bands can say that.

The charming, industrial squalor of the Electrowerkz venue is not exactly unusual or prestigious. But it does provide the perfect black-sweat-box space for a stripped-down take on the latest Wrekmeister album, The Alone Rush, a stunning, introspective mediation on loss and decay. Shorn of the usual revolving cast of characters, The Alone Rush features core, multi-instrumentalist duo of J.R. Robinson and Esther Shaw alongside former Swans drummer, Thor Harris. Harris isn’t present tonight, but – despite his distinctive style – you scarcely notice alongside Robinson’s tough-edged guitar-work and Shaw’s exquisite violin-playing and piano. Robinson and Shaw relocated to Chicago to record The Alone Rush, a deliberate desire for isolation following personal tragedy and the deteriorating health of a loved one, and they certainly seem at their most sombre and melancholy tonight. In interviews they come across as a close, charming and genuinely likeable couple, discussing art and literature and finishing each other’s sentences. But they’re laconic on-stage, beyond offering polite thanks to the audience and exchanging glances with each other to cue the next section.

As an intensely personal work, The Alone Rush is also their most vocal-led album to date, full of dark balladeering in Robinson’s cavernous baritone reminiscent of Nick Cave and Type O Negative. During ‘Descent Into Blindness’, he’s staring at the floor or out above the crowd, clearly deeply involved in the song’s painfully stark lyrics of physical degeneration. His hands are shaking, if only to add gentle vibrato to the chords. The set isn’t all softness and resignation to suffering, however, as huge crashing doom chords wash into low organ drones and bursts of discordant piano, accompanied by a single, terrifying shriek from Shaw that sharply peaks before we drop again to gentle piano trills. According to their Bandcamp page, “J.R. Robinson perceives life as a long, gradual process of decay” – a pessimistic if entirely realistic outlook – and I can’t help but think of that statement at the show tonight. It’s a theme directly reflected in Robinson’s lyrics, but there’s also something similar in the nature of warm guitar distortion, left to fade in gravelly fragments, individual sonic atoms trailing away…

Shaw’s exquisite violin playing is one constant element of Wrekemister’s sound, blending seamlessly with whichever styles they adopt, especially when Robinson hits the distortion pedal. Even as a two-piec,e the vast eclecticism of Wrekmeister’s recorded oeuvre comes across when entropic ballads moving into violin-led synth passages, or lumbering doom riffs leading into expansive washes of noise and piano.

Overall, I’m struck by the vulnerability of Wrekmeister’s performance tonight; emotion that’s bravely raw and visible even behind a wall of guitar drone. Free yourself from generic restrictions and catch Wrekmeister next time they’re in town for a testament to innovation, sincerity and emotion.