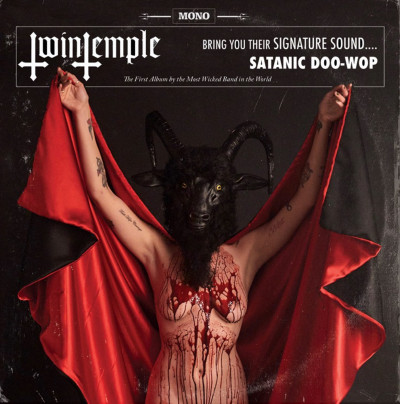 Bring You Their Signature Sound: Satanic Doowop by Twin Temple

Well there’s an intriguing album title… Twin Temple (Bring You Their Signature Sound… SATANIC DOOWOP). So it turns out that the signature sound of Satanic Doowop is much like Amy Winehouse singing Dusty Springfield songs with lyrics by Madonna and King Diamond in a sex-positive Satanism collaboration… and they’ve absolutely nailed it. End review.

To be honest that’s what you need to know here, with the background that this two-piece have appeared from Los Angeles to bring the world a style of music it didn’t know it needed. Presumably hoping that they’ll hit the sort of crossover note hit by Zeal & Ardor’s other surprising-but-actually-makes-total-sense collision of styles, particularly with its ostentatiously Satanic trappings. They certainly seem to be fully committed to this aesthetic, with the press release setting out that the wife and husband duo are practising Satanists, and judging by the fact they initially self-released this record before now getting the Rise Above treatment and raiding the prop box for a new album cover. Not to mention the witch’s emporium of merch appearing on their website, stocking as many Ritual Magick Temple Oils and Orphic Egg Altars as any popkult esotericist could desire.

‘The Devil Didn’t Make Me Do It’ is a great starter, with the clever switcharound in the title chorus, sassy references to the world as a beautiful junkie and joining the 27 club, topped off with the just brilliant ‘Be-el-ze-bub’ backing vocals. Lyrical concerns are largely about sex and agency, foregrounding freedom and pleasure against restrictive moralism and conservative ideas about gender roles. The rejection of parenthood is connected to this as well (“I don’t have sex for procreation” in ‘Sex Magick’, “I don’t want babies” elsewhere). This is one of several ways the record is reminiscent of Coven’s legendary debut album Witchcraft Destroys Minds and Reaps Souls from a full half century ago- the most shocking lyrics on that record are about killing babies: that record and this one both pinpoint how patriarchal religion links enjoyment of sex with symbolic refusal to accept motherhood, and consequently with witchcraft and evil.

Like Zeal & Ardor it transcends mere curiosity value or pastiche because it’s very very well done, with recording techniques (mono, straight to tape etc) reportedly matching the early rock’n’roll aesthetic. And again, the Satanic angle is interesting when actually a lot of metal’s ideological transgression has moved beyond that. In some ways that feels a bit old hat– though maybe appropriate for a resurrection of now-archaic rock styles– but the claim in the promo that ‘this transgressive act of musical mischief is as subversive as it gets in this age of societal division, insidious ignorance and empty hostility’ is plainly silly. Yes I know, ignore all the hype bollocks in press releases.. but it does touch on how the record straddles (hehe) straight-faced homage to classic styles, serious expression in lyrical talk of sex and power, and whether it likes it or not, amusing winking novelty kitsch.

Regarding the supposed transgression, there’s a track tacked onto the end labelled ‘Satanic Self-Initiation’, which has to be another nod to Coven doing the exact same thing on their 1969 album. But even as the latter band’s Jinx Dawson plays up the supposedly shocking aspects of their heyday while doing the rounds of a comeback tour, the cheesiness of the po-faced theatricality of that track has aged far less well than their actual songs of witchery and magick. The same can be said of Twin Temple… who is really shocked by this? I guess the evangelical right in the US can always be held up as likely to get in a froth about such things, and their political clout is definitely something worth challenging. But on an undergroundish record it seems like its protesting about its own controversy a bit too much. There are a couple of brief musical interludes, ‘In Lvx’ and ‘In Nox’ as well, so that basically leaves eight fully-realised chunks of enjoyably sassy vintage tunefulness.

‘Lucifer My Love’ is a straightforward teen love song, with “I’m just a fool in love with you” lines straight out of that ‘Earth Angel’ song, but with free love extras such as winking references to “human sacrifice” and easy-joke lines about Satan being a better kisser than Jesus, and the slower pace allowing the vocals to luxuriate in lines like ‘Oh Satan deliver me from society’s hypocrisy’. ‘Sex Magick’ reminded me of seeing Juliette Lewis and The Licks actually… very different musically but a similarly fabulous pouty delivery of talk about sex and fun, in this case with the title stretched out sumptuously like bubblegum. The opening drum chunkachunks on this one also conjured up Roky Erickson’s ‘I Walked with a Zombie’, and actually his post-13th Floor Elevators work also seems a good touchstone, in his combination of lyrical weirdness about vampire aliens to sublime 50s pop Americana.

The Mexican hints (musical and lyrical) on ‘Santa Muerte’ aren’t quite as successful, and the power of the ‘black magick’ lyric delivery on ‘I’m Wicked’ is a bit dissipated by the similarity of the exuberant ‘sex magick’ a couple of tracks earlier. The songs are all stylish and the vocals are great and distinctive, with the sexy satanism adding campy amusement. Its a very distinctive record, but perhaps almost suffers from nailing the style so instantly… each song for example tends to end with a show-tune style jazzhandsy slow repetition of the chorus line. Perhaps that’s fair enough for the doowop style which very much sticks to the harmonic template, but its no coincidence that, with a few more surprises and variations in its musical structure, ‘Let’s Hang Together’ is the highlight on the latter half of the record. In the witty ‘please don’t hang us separately’ payoff, the syllables in the last word of the phrase might risk seeming a bit squeezed in, but this style of music is made for the baroque extensions and overenunciation so it works perfectly together with the campy horror-shock lyrics. Overall the musical delivery is super tight, from the disciplined horn peeps and shimmers, plinky piano keeping the slower tunes ticking along, the vintage Bo Diddley-style guitar licks (please please can they cover ‘Love is Strange’ or ‘Dream Lover’ and make them about ritual hypnotism or something?), and the instant high-drama transitions which allow the vocals to fly before snapping back into classic pop rhythms. Overall this is a marvellously well-realised concept and brilliantly enjoyable album, Twin Temple truly claiming the signature sound of Satanic doo-wop for their own.