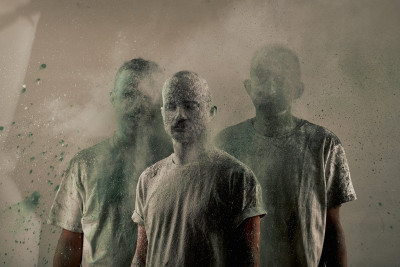 Interview: Teeth Of The Sea

Teeth Of The Sea on the web:
Facebook | Bandcamp |

Personally I love being in the studio; that's where we really get to indulge every idea we can come up with, and it's never too arduous making a Teeth Of The Sea record, we tend to work very quickly due to the fact that we can't afford much time in the studio.

Teeth Of The Sea have just released their stunning new album Wraith and it is an expansive listen that builds on their past work but takes the band’s sound into exciting new places. We had a chat with Mike Bourne to hear all about Wraith and how the album came together as well as how the band’s sound has evolved. We also heard about the band’s live plans, festival memories, having their music played by the mighty Andrew Weatherall and playing live with the Boredoms.

(((o))): Your new album Wraith is out soon. How did the recording of the album go?

It was fun. Personally I love being in the studio; that’s where we really get to indulge every idea we can come up with, and it’s never too arduous making a Teeth Of The Sea record, we tend to work very quickly due to the fact that we can’t afford much time in the studio. Often what we’re trying to achieve is quite unorthodox so we’re very lucky to find people who are willing to take risks and work outside of their comfort zones, in this case Giles Barrett at Soup Studios and ‪Erol Alkan‬ at The Phantasy Sound.

(((o))): How did you come to work with Erol Allan and what did he bring to the tracks he produced?

Well, Sam’s known Erol for years and he’s played some of our tracks out before so we just asked him. We’ve never worked with a producer before and we felt it would be interesting to explore some new working methods on this record. Erol instantly understood where we were hoping to achieve with ‘I’d Rather, Jack’, and introduced some really exciting ideas that sent the track off in a different direction. His studio is totally lush, filled with analogue gear – it was nothing but a pleasure to work with him.

(((o))): You also worked with Chloe Herington, Valentina Magaletii and Katharine Gifford. Can you tell us about their contributions to Wraith?

The record simply wouldn’t be as good if it weren’t for their input. For VISITOR we wanted to use a full drum set up, something we’ve never done before and weren’t entirely sure would work given it’s new to us. Val came in and just totally nailed it first time; our jaws were on the floor. It was quite humbling working with such awesome talent.

(((o))): The album is very eclectic, did you set out with that eclecticism in mind it did it work out that way when you were recording?

That eclecticism is just what naturally happens when you have a band comprised of different musical personalities. Our sound is naturally all over the place. I’d favour the term ‘exciting’ rather than ‘eclectic’! We don’t want to keep making the same track over and over again, where’s the fun in that?

It really depends on how you define ‘heavy’. ‘Hiraeth’ is heavy as fuck with sub-bass, ‘Gladiators Ready” totally bangs, and ‘I’d Rather, Jack’ sounds like it’s been dragged across broken glass, backwards. Maybe Wraith is a tad less malevolent than Tarantula but you still wouldn’t want to mess with it.

As soon as we started working on new material in our studio, The Facility, strange and unusual things started happening that we just couldn’t explain – equipment moving overnight, bizarre noises coming from amps that weren’t plugged in, a small bust of Beethoven weeping milky tears. These disturbances became impossible to ignore and ended up informing the record in ways we had never imagined. In some ways the title is a dedication to that unknown presence.

It’s been very positive (so far!). It’s reassuring that people are still interested in what we’re up to – for the last few years we’ve been relatively quiet and the band has gone through some significant changes, not least becoming a trio. Plus it’s quite a fucked up record in places so it’s a total result that listeners seem to get it.

‪(((o))): Andrew Weatherall‬ played the song Hiraeth on his radio show recently. How did that make you feel?

As someone who spent a large part of the late ’90s sitting in a bedsit smoking soap bar and listening to ‪Two Lone Swordsmen‬ it seems almost unreal to have Weatherall dig TOTS. They say you should never meet your heroes, but you should definitely let them play your songs on the radio.

(((o))): This is your fifth album, do you feel that your sound has evolved with each album and how has it done so far?

I think we’re constantly evolving; we’re always trying new methods of working, new instruments, and more recently new collaborators. We have no idea which direction a track is going to go in when we start jamming, and that makes the process really exciting; ANYTHING could happen.

It was a long time ago, we were all young(er) men! Most of that time is lost in a thick haze that smells very strongly of Kronenbourg 1664 and Golden Virginia. I do remember us having a lot of fun, constantly fucking about and making each other laugh, and it’s still exactly the same today.

Short version – Me, Jimmy, John (Hirst), and Darren (Strickland) were at a Wolf Eyes show, totally LEATHERED, and were so inspired we decided to form a band. Roped Sam in for the first rehearsal and called ourselves Jaws. A few lineup changes plus a change of name and here we are ‪12/13‬ years later putting out our 5th album.

Everything, that’s the key to the TOTS sound! Initially we were aiming for a cross between Wolf Eyes and ‘They Were Wrong…’ era Liars with a bit of Hovercraft thrown in, but that quickly went out the window in favour of an anything goes approach. We’ll try anything in the pursuit of a total TUNE; see Gladiators Ready’s mix of Josh Wink meets ‪Motorhead‬ for the perfect example. As long as it sounds decent we’ll use it. If it sounds like it’s been done before we’ll ditch it.

(((o))): You’ve got a launch show for the album at the beginning of March alongside Pet Brick and Valve as well as Steve Davis and Kavus Torabi. That’s quite a bill. What can we expect from the show?

You can expect a fucking noisy, gnarly, nasty, sweaty rock show. I mean, have you heard Pet Brick?! Fuck…

Steve’s been a friend for a few years now, we met at a Hirvikolari show he was DJing at and he’s a fan, having played out TOTS at Bloc Festival amongst others. He’s becoming a bit of a whiz on the modular synth these days and him and Kavus (Torabi) are making music together now, so we should get to hear some of that soon. If that’s not something to get excited about in 2019 I don’t know what is.

(((o))): You also have a series of dates across the UK and Europe after the album is released. Are you looking forward to hitting the road?

Touring Europe is always fun (apart from when your van breaks down an hour from Eindhoven Psych Fest and you have to spend 8 hours sat on the baking hot motorway before you miss your show and then have to get towed all the way from The Netherlands back to London). We’re mostly playing places we’ve never been to so it’s genuinely exciting to see what reception we get. Once you get on the road it’s a blast. Even the hangovers are fun. Well, bearable.

Mixture of old and new. Something for everyone, unless you really want to hear the tracks we’re not playing.

In London it has to be The Lexington. Never played or seen a shit gig there – you can always see the band, the sound is great, the stage is nice and big. Only downside is if you’re DJing when a band is playing you can’t leave the booth so have to piss in a bottle, plus the graffiti in the green room has been wallpapered over so no more ‘Bat Fanny’ illustrations. Other than that it’s brilliant. Islington Mill in Salford is also worth a mention as every time we’ve been there it’s been a mental night. Big shout out to the Fat Out crew!

(((o))): What has been the most memorable gig you’ve ever played?

For me it’s probably Sea Change Festival in Totnes in 2016 as it was a bit of a homecoming, a lot of family and friends were there, and the reception was amazing, plus it was my birthday. We’ve played too many great ones to pick though. One thing that remains constant is that a truly memorable gig is always down to the audience reaction. It doesn’t matter how many people are there, how big the venue is, how well you play; if they’re going nuts it totally makes the gig.

Boredoms with 88 cymbal players at The Barbican cos I was lucky enough to be one of those 88. A truly transcendental 2 hour experience. Something like what I imagine Patrick Swayze’s character Bohdi feels at the end of ‪Point Break‬, right before he bins it into a big wave and drowns.

‪Aphex Twin cos he’s got a mad decent laser show going on at the moment.‬

(((o))): You’ve got a date at the end of April at the Cardiff Psych & Noise Fest. Are you looking forward to that event?

(((o))): Will you be playing any other festivals this summer?

Hopefully! Our booking agent is hard at work as we speak.

Milhoes De Festa and Milhoes De Festa. It’s in the sleepy town of Barcelos in Portugal and it’s sooooo good. Watch bands by, or in, the swimming pool all day (Sly & The Family Drone did a particularly great set there a few years ago) then party till the early hours across 2 big stages. Their lineup is always eclectic and really well curated (Goat, The Bug, and Oozing Wound all killed it one year). If you’re interested enough to be reading this you really have to go and experience Milhoes.
HUGE shout out to Supernormal Festival too. ‪2 – 4th August‬. Apologies in advance if I stumble into you and spill your cider.

(((o))): What have been the highlights of your time in Teeth Of The Sea so far?

Watching ‪Spandau Ballet‬ do a midnight show in a tiny club in Austin whilst we were over for SXSW… Arriving in Cluj, Transylvania to see huge posters of us plastered all over town… It’s hard to pick, there have been so many great moments. Playing in a big wooden geodesic dome at CERN, home of The Large Hadron Collider in Geneva, then getting totally pissed up with some particle physicists ‪until 4am‬ is going to be quite hard to beat to be honest.