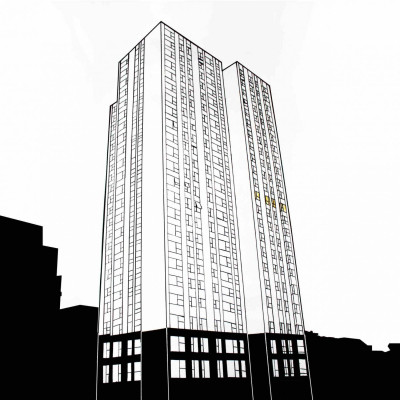 SPC ECO (that’s ‘Space Echo’, band-name-pronunciation fans) is a collaboration between Dean Garcia and his daughter Rose Berlin. Dean was part of the talent behind the masterful Curve, who first broke 26 years ago. How time flies. Curve blew a hole in my world – specifically the song ‘Chinese Burn’ on 1996’s Come Clean – demonstrating as it did that electronic music could have the same punch, grit and anger as any rock song.

SPC ECO clearly isn’t aiming to flex its muscles in the same way as the raw power of Curve, and Rose Berlin’s sweet vocals shouldn’t be compared with Toni Halliday’s at times vitriolic delivery, but this music has a dark undercurrent and occasional edge that does bring Curve to mind at times. Fifteen is an album of “moods and reflections”, in the band’s own words, and deeply personal too.

Fifteen is an album that reveals itself in stages through repeated listens – the kind that starts off seeming unassuming, quite uniform in sound and not particularly deep, but which ends up presenting each song as a perfectly formed item for your delectation, clearly distinct from what went before or comes after. It is to be given due consideration (by which I mean, don’t listen to it in the car – its nuance will be lost), and given time and space by the listener to grow to know the music. Once that time has been spent, the delights are many-fold. There’s the fuzz-driven opener ‘Fading Out of Time’ and the dubby ‘Teach Yourself’ with its far off vocals and melody that’s almost an afterthought. There’s ‘The Heart And Soul’s understated, distorted guitars, and the vocals that make for a woozy dreamscape of a track, ebbing back and forth.

There’s elements of lo-fi indie rock in here, ambient electronica, trip hop and really, really well-crafted ethereal pop. On the mesmerising ‘That’s It Well Done’ Rose hints at the dusky overtones of Toni Halliday layered over brooding, pulsing trip hop. The trip hop continues on the dark ‘Breathing’, which would fit alongside with 100th Windows-era Massive Attack in its sound. This segues into ‘Melancholia Mania’, which lives up to its name and has a very melancholic vibe. The synth-led ‘Gloria Sudafed’ relies on Rose’s light and breathy vocals to carry it along, and sounds almost like Goldfrapp.

If I have any criticism at all it’s that the fifteen tracks of Fifteen are too numerous and could do with some reduction (which would spoil the album title, I know). Several tracks are under three minutes, and some, I feel, don’t get into their stride. I love the sound and the vibe, the delicate way that many of the songs are built, but the likes of slow, bass-heavy ‘Never Can Know’, buried at number 13, might be more prominent if allowed more time to grow and expand. The exception is the 12-minute final track ‘The Little Ones Out Of Time’, which builds towards the end into a drone-led ambience that is the perfect closer.

Fifteen is a beautifully created album, full of grace and poise, and which – given enough time – will get its hooks into you. Well worth your attention.