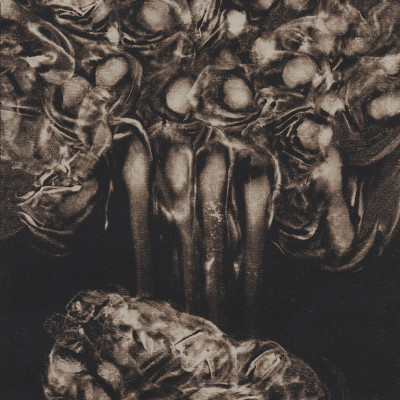 Juddering-misty-fog black metal riffing is solidly where Sordide‘s new record is rooted, but there’s also an impressive technical expertise that’s reminiscent of some mental death metal of the Portal school: not so much in the sound but in the surprise of the sprawling, grotesque and unlikely metal forms that spew out of the depths. An example is the fantastical robot tentacle of a guitar lead that unfurls out of the chaos of the first song before the track winds up into a slower death-dirge tension. Earlier on in that track ‘La peur du noir’, the vocals stand out, a weird zombie droning slur of speech that, like much in the album, is totally fitting for an extreme metal aesthetic while also unusual and pleasingly weird.

In contrast to the blissfully scratchy, tinny, hissy school of atmospherical black metal, here the bass is a formidable tool in driving the power of the songs, basslines lurking, furtively exploring, opportunistically appearing like a sniffing rat, unafraid to announce its presence. There’s some great bulging-eye repetition bits, which border on either the hypnotic or the insanely pathological, creating a build in intensity while keeping the gripping focus. The latter can be heard in an obsessive-sounding solo riff going over and over towards the end of ‘Hier déjà mort’ hints of scratching and headbashing before released by more frenetic noise that bursts into wild squealing before an abrupt end.

My knowledge of the subtle nuances of French is approximately zero, so maybe the reference is all wrong, but the title of the track ‘La chute’ seems totally appropriate for its helterskelter of hairpulling riffs, sort of a Goonies-water-slide in corpse paint that dumps you into a swampy grave. The penultimate piece, ‘La savieur de la fièvre’ is the highlight for me, a great collection of riffs which all seem to be obsessively founded on or returning to a particular note behind the scenes, which gives the track an amazing sense of mesmerising tension, bending the world around its angry weirdness.

Bookended by creaky-piano ambienty ‘Prelude’ and ‘Postlude’, this is a set of six solid, engagingly intense, varied but coherently focused black metal blasts.