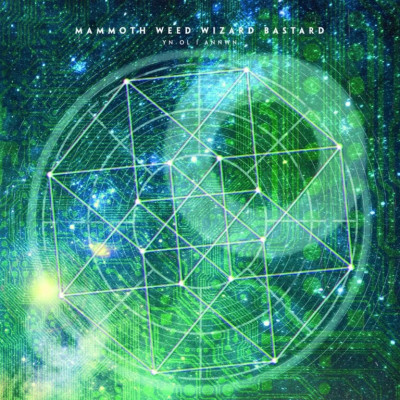 Right from the very beginning there was an inkling that Wrexham’s heavy pounding doom explorers, Mammoth Weed Wizard Bastard, were going to be more of a genre defying band than the name may at first suggest. While they are an obvious fit at Desertfest ilk festivals, not many of their peers, one assumes, would be hand-picked and asked personally by The Cure’s Robert Smith to play at his 2018 curated Meltdown festival, as MWWB were last year.

They are now onto their third album Yn Ol i Annwn (also to be released on the New Heavy Sounds label) is the third part of the trilogy, which started with their debut Noath Ac Anoeth, and then the evolving huge leap forwards of follow up Y Proffwyd Dwyll. And, indeed the MWWB evolution continues, displaying instantly the same amount of expansiveness from the second album as the sophomore album did compared to their debut. The instant difference this time is the huge amount of light, shade, and space within the grooves. Don’t get me wrong, this is still reassuringly thunderously heavy, but there is a reigning in of the fuzzy drenched guitars which recedes from their previous albums’ all-consuming distortion soaked domination.

Progression also comes in the form of extra use of keyboards, cello (first used on the said sophomore album) but all intelligently used and skilfully blended into the mixer. As is Jessica Ball’s vocals, turned up higher and consequently, considerably more lyrically armed on certain tracks. Take in ‘The Spaceships of Ezekiel’, consisting of their trademark heavy slow riff which bounces in unison with the rhythm section of drummer James Carrington and newest member, bassist Stuart Sinclair. And the latter part of this eight minutes plus first engrossing entry into their cosmos sees the band upping the dramatic in tremendous style, as Jessica croons ‘down’ and in comes an inescapable harmonious keyboard segment which Van Der Graaf Generator would have been proud of. This is setting the album’s bar incredibly high.

The now familiar gloriously spacey moog/keyboard offerings first heard on their previous album, ramps up the Hawkwind space rock adventuring vibes to an even higher degree. And it all amounts to the album having an even greater sense of the atmospheric epic. If there is any doubt, then listen to the excellent album closer “Five days in the abyss’ or the monstrous instrumental ‘Katyusha’. The latter is the longest track on the album and is a mesmerising, head-spinning thirteen minutes plus of spacey swirls and loops backed by controlled dense riffs and a thumping (and again) bouncy groove. If this doesn’t get your head nodding then you are reading the wrong review and music website.

Then they knock you out again with ‘The majestic clockwork’, nothing clockwork about it, but majestic it is. Jessica’s sweeping ethereal vocals float and swoop high over the top as the low -end power chords are driven by the hard-hitting sticks-man whose style is also an enormous underlying part of the MWWB sound.

In fact, on this album how each member compliments each other and how their vital segments make up the whole MWWB musical force is heard in a notable clearer listening experience. So, sterling work to producer Chris Fielding, recorded at the Skyhammer studio, for enhancing and bringing out into the open their tunefulness and textured subtleties.