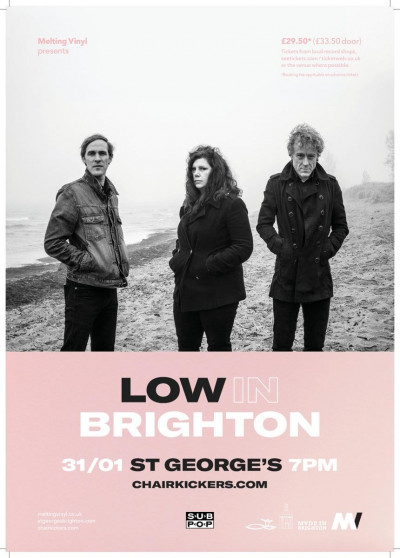 Unless you have been hiding under a rock for the past year, there is a good chance that you’ve probably already heard Low’s latest (and critically-acclaimed) record. If the truth be told, even if you have been hanging out beneath a boulder, it’s still pretty likely that you would have felt the gargantuan low-end vibrations that so forcefully permeate the heart of Double Negative. Whilst this noisy evolution might initially have seemed jarring for fans of the band’s earlier work, these deep electronics (which caused people to check the needles on their turntables for distorting fluff) had in fact grown from seeds sewn as far back as 2007’s Drums and Guns. It wasn’t until the finale of their previous album – Ones and Sixes – with its sub-bothering bass and caustic thumps, however, that the path to this drone-drenched landscape was fully laid out. The opportunity to witness this audio spectacle within a snow-peppered church on a wintery Brighton night was simply too much to pass on.

First up, however, is Richard Youngs. His gentle vocal sweeps are fragile, vulnerable and yet delivered with a confident sway. This is reminiscent of another Richard – Richard Dawson. Where Dawson’s a cappella performances are rooted in traditional folk narratives, Youngs’ are more akin to mantra. Repeated phrases morph, adapt, evolve. They swirl enigmatically. Meaning is looser, harder to capture. And, just as our ears attune to the soft delicacies of his voice, he punishes us with a deafening “HEY” belted out with such velocity that it shatters our trust in his gentle timbre. On occasions, Youngs picks up a guitar and thwacks it to create noisy swathes from which to harmonise against. More often than not, he is juxtaposing the din with his silken vocals rather than dove-tailing with the notes. Towards the end of his set Youngs set about slowly and methodically packing up his equipment, all the while clutching the microphone against zipped zips, closed clasps, and the fabric of his encased guitar. The audience, unsure if this amplified tidying was part of the performance, applaud uncertainly, bringing proceedings to a, potentially premature, conclusion.

Earlier in the evening local record store, Resident, played host to an intimate, stripped down set from Low. Acoustic renditions of tracks like ‘Plastic Cup’, ‘Murderer’, and ‘Disarray’ provided a delectable taster for the main event to follow. The latter of these tracks still managing to harness a rib-trembling rumble despite the reduced amplification. By the time that Low take to the stage at St George’s Church in Kemptown, appetites are sopping whet.

Blue-lit from behind they gradually build ‘Always Up’ from a soft trickle into a soul-rousing ascension. The trio of Alan Sparhawk (guitar and vocals), Mimi Parker (drums and vocals), and Steve Garrington (bass) combine artfully to draw shimmering rivulets of droning delight from their respective instruments. They carefully meld the quiet and forlorn into gut-rumbling magnificence. This really is the band’s bread and butter and, when they spread their wings, my god, can they soar.

Low (although I believe that it is predominantly Alan) often post images online of instruments with the caption “Here is a guitar to keep you warm”. Well, here is a performance to soothe aching bones, toughened hearts, and distressing anxieties. And we’re all that much toastier for it. This is the sound of sombreness infected with life. It is a careful vitality that refuses to submit to exuberance. 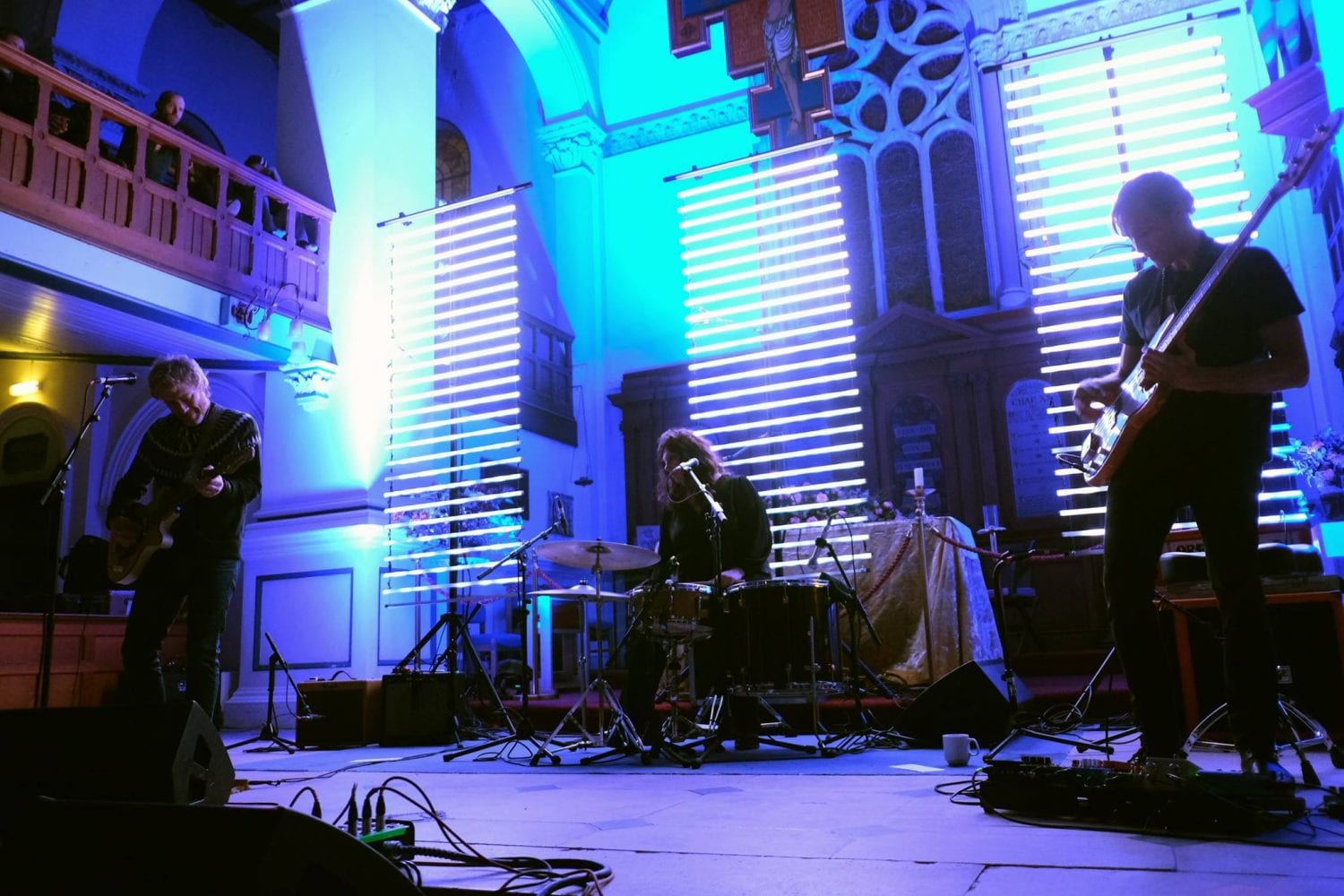 As they launch into the rugged lurch of ‘No Comprende, a single flame flickers on the dangling illuminated strips behind them, which give the impression of towering heated towel racks. The dual vocals of Alan and Mimi interweave like vines vying for the light as, outside, snow begins to fall. Serendipitously ‘Plastic Cup’ is up next. It is a tale told through the journey of a drinks vessel which never degrades and outlives us all. With climate change currently inflicting one of the most ferocious winters of recent history upon their homeland, this feels most apt. Each musical nuance is deftly altered, allowing their slow rhythms to offer space for transcendent reflection. Sounds are dialled back, reduced, and, when deep sonics loom back in through the church’s trembling walls, the spine-shaking effect is comparable to being blasted by an arctic storm.

When they shift off of the beaten path into untrammelled sounds, Low’s noise is that of a dense unravelling. It is furrowed from fathomless depths. It is the sedate carnage of planetary creation, of rushing magma, and swelling seas. It is a hefty threnody that converses with lizard brains and gravitational pulls. It is not unsettling, it is resettling. It’s as if they harness some ancient, animal, power.

The biggest surprise of tonight’s performance is that they have opted to break up the heart-wrenching triptych from the top of last year’s study in expressive rumbles. Whilst ‘Quorum’ makes an early appearance in the setlist – its desolate dirge segueing out from the opener ‘Always Up’ – ’Dancing and Blood’ doesn’t surface until around halfway through, its deep purr thickening along with the snow outside.

Appearing as a trio of shadows, of spectres, the band shape the anthemic ‘Nothing But Heart’, which is resplendent in the mighty robes of mounting sound that adorn it. It is a towering performance elevated by the grandeur of the church’s acoustics. This then transmutes into an oneiric ‘Especially You’ which is soon followed by the tugging ache of ‘Fly’ with its drumbeat echoing out like a mic’d up heart thudding with awe. ‘Dancing and Fire’ drags the tempo down even further (as if Low have ever really dabbled in the ecstatic). And when the line “It’s not the end it’s just the end of hope” is delivered, it feels oddly reassuring for these troubling times. The staccato emotional throb of album-closer ‘Disarray’ subsequently collapses the remainder of the evening to a fitting denouement.

Except Low can’t send us out into the cold night like that. They return for an effervescent encore of ‘Sunflower’ that neatly contrasts with the drifting snow piling up outside. In these conditions, they are the band to keep us warm.