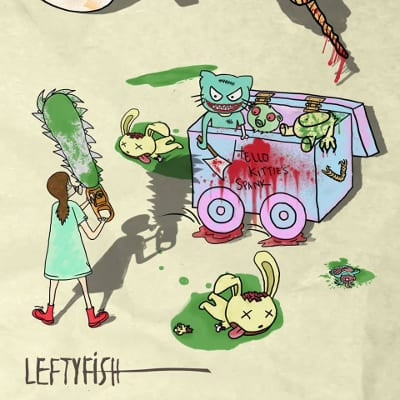 Lefty Fish are a band from Yogyakarta, Indonesia who are going to pass a lot of people by. Its almost inevitable: they herald from a place outside an exclusory musical cannon and they play in a genre that by design is only going to be palatable to a select few. Lefty Fish are from the same line of musical thought that brought the world Melt-Banana, Midori, and John Zorn’s Naked City – each band so singular that they must be grouped together. Listening to Lefty Fish’s jazzcore debut album, Hello Kittie’s Spank, evokes the same reaction of the first discovery of those same bands that define one of the most provocative musical movements active today.

Hello Kittie’s Spank is only 20 minutes long, but within that timeframe they cover more musical ground with more ferocity and confidence then most bands can create in their entire careers. The swaying from city lounge jazz to vibrant grindcore is effortless, where piano, brass section, and corrosive wails don’t so much work in discord with each other but reach a place of complete symbiosis. Its complete sensory overload, but the moment the adrenaline injection and eye crossing confusion starts to wane you start to see that this is music with melody, rhythm, and poise at its beating heart with every element pushed to its most extreme. The foundations threaten to be crushed under the excess – but it holds. With songs rarely scraping the 2 minute mark, the album pelts forward with the hyperactivity of an electrical current tumbling down a metallic stairwell. With interludes of laid back brass instrumentation there is enough time to regain your breath, to refocus, before inevitably having that ripped away from you once again in the next minute long attack.

Orchestrating the chaos is vocalist Fansisca Ayu, who by turns chats, chirps, and croons her way through at a breakneck place before breaking into a cacophony of growls and snarls that means you are never sure what direction you may be yanked in next. The influences are extremely pronounced, notably Melt-Banana’s damaged chirps of Yasuko Onuki. There are times on this record where she sounds uncannily like Onuki singing on 13,000 Miles at Light Velocity – notably the only Melt-Banana release produced by John Zorn. The album as a whole is maybe the closest any band has gotten to that raw, inimitable lit dynamite that was Melt-Banana’s pre-Charlie material. Song titles including ‘You, Fish!’, ‘How Many Corners Are On A Circle?’, and ‘Full Parking Lot, Push, Throw Away!’ only deepen the connection. For a band to stray so closely to one of the best bands on the planet, whilst keeping their own unique flavour, is something that can only be applauded.

Hello Kittie’s Spank is an album of extremity and inventiveness that doesn’t so much as fill its run time but overflows like a bowl of never ending porridge. With a 20 minute run time its over in a flash, but with each new listen the surprises never seem to lose their lustre. If you are a fan of left field extremity, and the aforementioned comparisons have appealed to you in the past, this is essential listening. It would be the greatest of injustice if an album so overflowing with life, so verbose in its statements, and so transcendentally challenging in the limits of sonic synergy was to go unheard. This screams for an audience. This cannot be ignored.