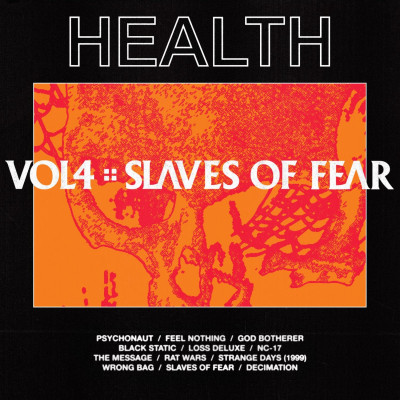 Vol 4: Slaves of Fear by HEALTH

In Adam Curtis’s 2016 documentary for the BBC – Hypernormalisation – he discussed the politics of confusion that was being spread throughout the modern world. Never knowing the stance held by your oppressors makes it impossible to contest their actions. Russia plough funding into opposing ideologies. Trump makes contradictory claims. The British government announces the end of austerity whilst simultaneously reducing real terms spending per capita. This is the sharp point of late capitalist realism: something insisting on the necessity of its existence, that there are no viable alternatives, all the while failing to rebuke the tangible evidence of its own, catastrophic, failings. With HEALTH’s first full length since 2015’s Death Magic they have echoed this reprehensible dichotomy as a way of shining a burning light upon our duplicitous overlords.

Slaves of Fear opens unexpectedly. With acoustic guitar work that has me double-checking that I’ve put the correct album on. It appears that I have. The precision military drums that swiftly follow reassure me of that. These are familiar fireworks. There is urgency to ‘Psychonaut’ and the trademark, doleful, lyrics proclaiming “I’m only here once. Once is enough” fit the classic HEALTH schema. This ends with a digital firefight. It’s the audio equivalent of twitter bots scrapping or competing computer chess software going head to head.

‘NC-17’, the most palatial track on the album, enlists fizzing bass that does away with sparks of static rebellion. Sounds float in on flaming chariots only to be extinguished. Snuffed out. Vocalist Jake Duzsik opines “I won’t go back. I never want to try again”. His voice disappearing in a sea of reverb. The words lose meaning and coherence. Then he proclaims that “We’re trapped in a primitive past”. This protestor is gagged. His claims warped and manipulated beyond recognition. This is an album of police state fears. HEALTH function within a duality. They play both the victim and the aggressor. Sometimes leering from ivory towers to crush insurgencies before taking on the role of muzzled whistleblowers themselves.

Throughout the album there is the sense of paranoia, of being watched, of preparing for an armed intervention. Bombast, repudiation and regimented rage feed ‘Feel Nothing’. But these elements are never allowed to step out of line, never allowed to lose control. HEALTH’s music operates within strict borders, parameters, walls. Where this could spiral into wild noise, the rhythms inflict order, purpose, and direction. A quickened chugging march is pierced by disparate slashes of despondent synths on ‘Black Static’, the title of which is not something to embrace but to flee, and, when it rolls in with thick programmed notes towards the end of the track, we are fortunate that they eventually fade away like a diminishing perceived threat.

This formula continues with ‘Loss Deluxe’. HEALTH are envisioned as a digital, sonic militia dispatching waves of audial gunfire whilst a honey-voiced dictator enchants his republic with vague, nihilist rhetoric. Empaths will cling. Dissenters will be gunned down by blasts of electronic hardware. ‘God Botherer’, in contrast, begins with ambiguous and airy synths that smoulder and spread like acrid smoke. But, again, the drums anchor this all down. In this instance they sound like sledgehammers sinking metal spikes into pliant ground. Even when they burst into a machine gun RAT-A-TAT-TAT it is vicious yet constrained. Like the meticulous assaults of an emotionally subdued pugilist.

“Death wants to make you a part of it. Not coming with me. Saints, criminals. All just killing time”.

‘The Message’ repurposes the cadence of metal riffs and their big swiping power chords. This is the only moment on the album when the vocals are spat as if from gravelled throats. The system almost fails. Drums go off kilter, fighting back against programmed timings. But this mutiny doesn’t last long. As soon as it starts, screams are heard and it is all dragged back into line. But not before we get a  brief glimpse behind the dictator’s curtain.

There are sections, however, that diverge from this central narrative. ‘Wrong Bag’, for example, sounds like the mental unravelling after mistaking ket for coke. Warped electronics segue into fear-splattered rhythms that convulse out of kilter. This deconstructs further once brief waves of terror drift into bliss. A calm eventually breaks out. It soothers and reassures. Perhaps swallowing our SOMA will help. The most personal track on Slaves… seems to be ‘Rat Wars’ with the lyrics “I was never happy for you, you were always weighing me down”. Fittingly, towards the end of the track, the signals become disrupted and decay much like an ailing relationship.

The title track explodes with bass slaps which would almost sound tribal if they hadn’t been processed through walls of reverberating echoes. The kick drum then evokes the stomp of callous stormtroopers and we’re straight back into the world of orchestrated martial law. Streets are swept by black boots, helmets and flashlights affixed to fully-automatic rifles. The combination of this bridled malevolence and Duzsik’s sweet voice is akin to Orwell’s infinitely stamped face being lit with a grin. In a reference to the dystopian sci-fi film of the same name, ‘Strange Days (1999)’ sees ratcheting weapon fire signal space for those saccharine vocals. It is as if the dissidents are being executed, eradicated, erased. What seems like distant gunshots soon comes to the forefront for the bridge. The fighting now occurs from the centre out. The centre will not hold.

The final track, ‘Decimation’, ends the album just as it began. HEALTH talk of not looking back but, in order to learn, to grow, to never repeat, they must and do. ‘Decimation’ looks back. Not only to the start of the album but to an older musical era. Of protest songs played on acoustic guitars in the face of treachery and oppression. This acknowledges that protest still has not moved on. Hollowed out, wooden bodied guitars still accompany marches the world over. Those waving banners for progress remain trapped within the constraints of the past. With those shackles, can change really occur? Glimmers of new, electronic forms of rage have bubbled up since the 80s with hip-hop, power electronics, jungle, and grime occasionally scarring the surface. But, time and time again, it is cross-legged strumming that sets the tone for protest. These tools have been in our hands since Terminator X clashed sounds into noise yet they appear to be constantly fumbled and dropped. Perhaps HEALTH know something more. Perhaps it is the subtle and tender plucking of strings that conveys an emotional nuance that is typically absent from their tectonic slam. Those drums are rarely far away though and they do reappear here on the closer. Albeit inhibited, as if the sharp edges have been smoothed down. It’s almost balladry by HEALTH’s standards and, in the end, we are left with glinting beacons of digital noise guiding the way like streetlights bursting into illumination.