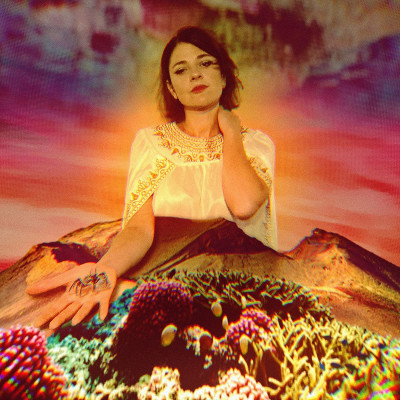 British singer-songwriter Gemma Ray has made quite a career out of her marvellously schewed weird pop, and with each release you never quite know where you are going to be taken. Purveyor of neo-goth/psych imbued with an enormous sense of pop within its confines, Gemma’s music is hauntingly melancholic, yet beautifully poised within uplifting harmonies. Part of the fun of listening to Psychogeology, her eight album, is to immerse yourself in the moments of sheer gospel delight and feel your heart lift up in transcendence.

Its a simple trick executed sublimely, with it being balanced by the haunting storytelling and music which brings to mind a cross between Danny Elfman at his most Tim Burtonesque, Marcella Detroit at her least dramatic, and PJ Harvey at her most playful. A perfectly poised album of weird goth pop, it may also be Gemma’s most commercial offering yet.

Opening with the gorgeous ‘Blossom Crawls’, the song slowly eases you into the album with its easy nature. It’s with the Lynchian riff of ‘Death Tapes’ that we get our first glimpse of something altogether unusual and as the song unravels into a brooding storm, the lyrics take an ever stranger turn into the metaphorical. It’s one of Gemma Ray’s strengths, that she can take what seems like just a simple verse, and turn its meaning into something altogether more sinister. Here she wants to “dig her hole” yet she also wants to fill the cracks and as the album progresses, this feeling of all hiding in plain sight, but remaining totally in control becomes a central theme.

This is revisited later on the remarkable ‘Dreaming Is Easy’ as a progressively glorious series of chord changes leads us to into its denouement of “through the darkness, through the pathway, to infinity”. As the song dissolves in a cascade of voices and noise its as if we have been sucked into the all encompassing void of chaos where only our guide remains in command.

Elsewhere we get the dramatic title track which moves mountains as a flute plays over the top. ‘Flood Plains’ goes deep in turmoil before a wonderful piano interlude creates a sense of stillness which causes you to stop in your tracks and focus directly on where the music is going next. The call and response harmonies make a return on ‘Roll On River’, before the lilting ‘Summer Comes’ provides a little light after the darkness that has gone before.

Psychogeology is one of those albums which reveals itself more and more as you poke around its little crannies. At first it seems deceptively simple, but as you explore further you realise there is some sublime artistry and craft going on. It’s almost bewitching and Gemma Ray keeps you enraptured throughout, beguiling you to listen closely, and further. Bearing all the signs of a remarkable singer-songwriter, she is also doing it on her own terms too, which makes her one of the most exciting musicians from this country at the moment.

That the album makes a play for commercialism makes it even more interesting and we may find that over the coming festival months, Gemma Ray’s voice is going to get heard more and more. Lets hope so, we need more artists like her.