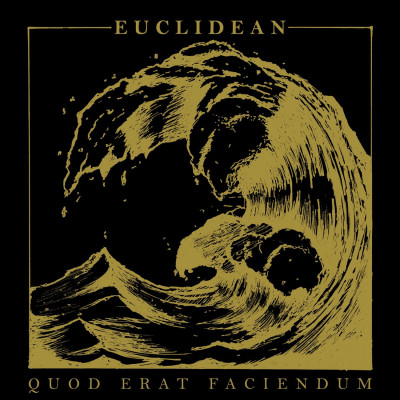 Quod Erat Faciendum has been around as a download since the end of 2017, and this new release is for the physical CD and vinyl formats. It’s been a long time in the making by Swiss four piece Euclidean, the eight tracks having been recorded across the years 2015 to 2017. But it’s a big piece of work – knocking on 75 minutes. The band takes its name from Euclid, a Greek mathematician who lived more than 2000 years ago and whose ideas formed the basis of mathematical teaching and ideas for centuries. He could tell you how to draw a triangle before tortilla chips were there for you to draw round, and ‘Quod Erat Faciendum’, or QEF, was one of his most famous phrases, meaning “that which had to be done”, putting it as he did at the end of writings about how to construct geometric shapes.

Deep thinkers, Euclidean have written Quod Erat Faciendum about the stages of the universe, starting with its mathematical origins. But math rock it ain’t, but rather a blackened mix of post-metal and gloomy introspection. With its melodic, chiming riffs, roared vocals, progressive hooks, and lots and lots of staring at the floor, fans of Cult of Luna will get a lot out of this, but Euclidean ain’t no clones, and they have ideas of their own.

It’s an album with a lot of space. The slow build of the intro track ‘Increatus’ sets the vibe for the whole album but doesn’t give all its secrets away at once. Its moody throb, edgy guitar and almost whispered spoken vocals ease you into the atmosphere before the might of 12-minute ‘Numbers Hold Sovereignty’ kicks in. It’s apt that a song about numbers be given such prominence and length by a band named after a mathematician and it’s only on this track that Euclidean’s progressive might starts to shine through. The pace is measured out yet again by third track ‘Superstitio’, a brooding instrumental held together by a picked guitar melody.

With three songs reaching the 12- to 15-minute mark, Quod Erat Faciendum warrants some time spent on it. There’s a lot of depth here, and more is revealed on every listen. It’s heavy, and the hoarse shouts of the vocalist put it squarely in post-metal territory, but many of the album’s eight tracks have light and ambience too, giving the songs time to develop and grow. None of it is fast or particularly pummelling: Neurosis it ain’t. Instead, there are doomy elements on the depressive ‘Obstinatio’, and meandering post-rock-type bits that reminded me of Bossk, Pelican or even Mono.

In short, Quod Erat Faciendum is an almost epic outing that deserves your attention. This is progressive heavy music with an intelligent head on its shoulders. Give it time: it won’t reveal all of itself on the first outing. A recommended listen.