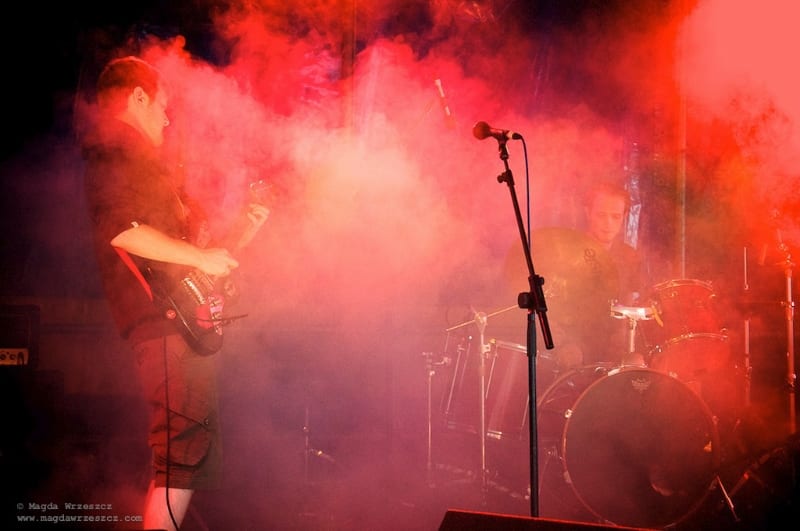 One thing I want to be clear on from the very start is that this is most definitely NOT a piece that aims to be critical of Arctangent. We love those guys and we are in absolute admiration for what they have achieved over the last 6 or 7 years. This is more about the unintended consequences of levelling up a bunch of bands beyond their wildest dreams and the copycat nature of the music industry.
To set the scene, we have to travel back to a time before Arctangent. A time when the vast majority of Math Rock bands could look forward to playing to maybe 20 or 30 people in the back room of a pub, where the expectation was that they might play to a thousand people over the entire lifetime of the band, not in one August afternoon. There was what you might describe as a ‘scene’ back then, but it was fractured & spread across the country; Buttonpusher in Derby, Bad Owl in Leeds, 1000Hertz in London, a smattering of others around the place, we even dipped our toes in those waters for a while.
And then one sunny (honestly, it really was) August weekend in 2013 the game changed, forever. The first Arctangent was a tremendous affair. It really felt like a gathering of the clans, all those faces you used to see maybe once a year if their band happened to come past your way on tour, all sat in the same field becoming mates. It was beautiful.
So how could this possibly be a bad thing, you say? Well, initially it wasn’t, and arguably still isn’t, but what I have observed as editor of this esteemed publication for the last decade, is that over the last 3 or 4 years the ‘next generation’ of bands have started to come through and on the whole (and there are always notable exceptions) the Math Rock I am now being sent is dull. Really dull. Worse than that even, it’s formulaic.
It seems to me that Math Rock is in danger of becoming like Prog (not to be confused with actual progressive music), stilted, overly bound by the conventions of what has gone before and gatekept by angry, hairy boys. It feels like all the lads (and let’s face it, it is 99.99% lads, which is another massive issue I have with the scene) who went to those first few ATGs all went away and tried to start bands that sounded EXACTLY like the bands they’d seen on those stages.
And you can’t really blame them for that. Wanting to emulate your heroes is entirely natural. The problem is that making good Math Rock is REALLY HARD. This is not like all those lads who saw the Sex Pistols, went and bought a guitar, learnt 3 chords and started a punk band. Bands like AMTP and Cleft made it look easy but it is far, far from the reality of it. The result is a watering down, or even a dumbing down, of what it means to be a Math Rock band. Well I’ve got news for you boys, tapping in 5/4 or having a 12/8 section in your otherwise terrible shouty post hardcore tune does not make you a Math Rock band.
Maybe this piece is all a bit ‘old man shouts at clouds’ / ‘it were better in my day’ but honestly, through E&D I get a vast quantity of this stuff thrown my way and nothing in recent years has had the impact, the sheer WTFuckery of hearing SNIB by Alright The Captain or the debut And So I Watch You From Afar album for the first time.
So I say to all the bands out there who undoubtedly think I am talking out of my arse (and frankly it wouldn’t be the first time); prove me wrong!