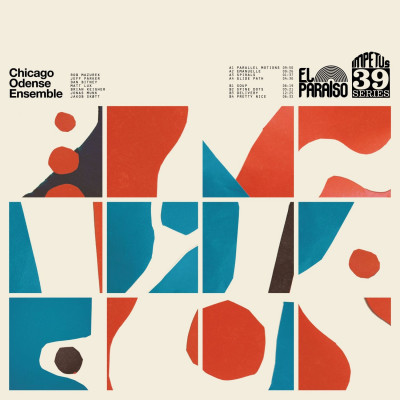 The result of an improvised collaboration in Chicago, Chicago Odense Ensemble sees Causa Sui members Jonas Munk and Jakob Skott joining with members of Tortoise and the Chicago Underground Collective to explore a kind of free-form electric/electronic jazz. Taken from a bunch of loose ideas and spontaneous outbursts of music, and later edited and re-arranged together in Munk’s studio in Odense, it provides an intriguing listen which, although demanding at times, is entirely satisfying once you allow the music in.

This isn’t music with any direct purpose, and even within the jazz field, you would need to approach the more progressive moments of Miles Davis and Sun Ra to gain a better understanding. Coming from a crossroads where jazz meets rock meets electronic music, the album is more of a soundscape for the modern psychedelic mind.

The shuffle of ‘Parallel Motions’ ushers us in to its minor world where nothing really sits still for too long. Almost incidental in tone, it provides a perfect opener to the album which becomes ever more cinematic as it goes on. Like the slow unfolding of a flower, its only when you come to the built up end of ‘Emmanuelle’ that you see the pieces start to pull together. Developing an ambience which takes in the night streets of down-town Chicago, with a European edge born of Brian Eno, it’s both redolent of a past age, but also extremely contemporary.

‘Glide Path’ is a gorgeously emotive melody with Rob Mazurek’s cornet taking centre stage whilst the chiming ‘Soup’ provides a nervous incessant energy, allowing the players to provide random bursts of colourful noise over the top. ‘Spine Dots’ doesn’t really head anywhere other than to lead us into the funked up ‘Delivery’, a playful melody which works the jazz/rock cross-over well, and finally ‘Pretty Nice’ kind of lives up to its name by providing us with closure to an album of intricate emotions.

Intricate, playful, and cinematic are words which could be used to describe this album. On another level you could use free-form, exploratory psychedelia. Either way, it’s an album which deserves to be listened to intently to understand its various nuances, although if you are approaching from the standpoint of the curious beginner who is looking for an album which encapsulates the ethics of free-form jazz, rock and electronica, then you may struggle. Overall though, an at times gorgeous listen which makes at times makes demands on your listening to make for an altogether interesting experience.