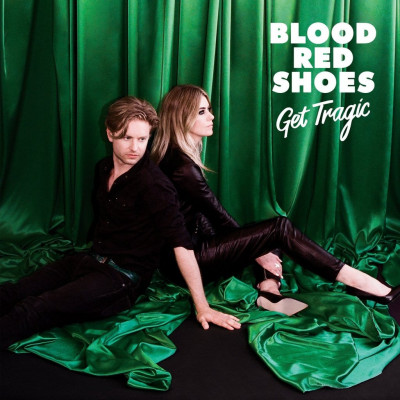 Get Tragic by Blood Red Shoes

Another rock band, another rock break-up. Almost. Blood Red Shoes’ latest album, produced following a bust-up between its two members, a spell of boozy, late-night self-destruction in Los Angeles, and reconciliation, is not the first record that was supposedly never to be, and it won’t be the last. Band infighting is a well-trodden topic in music, which finds its way into many of the lyrics here; “you go missing when you get bored, you never like to be ignored”, it opens, Laura-Mary Carter’s bitterness and resentment not lacking in bite. Get Tragic, however, does not sell anger, sadness or recklessness as much as it sells cool, which is not always to its credit.

Blood Red Shoes’ production has become more polished since their early material. The riffs are grungy, but the sound has a smooth, professional sheen, with heavy use of reverb, drum machines, overlaid vocals and smatterings of synth texture. For all the gnashing of guitars, Get Tragic’s vibe isn’t dirty or gritty; Steven Ansell and Carter have always been at the poppier end of alt-rock, but are especially so here. The record moves from the big, stomping chorus of ‘Bangsar’ and groovy hooks of ‘Eye to Eye’ to the late-night swoon of ‘Beverly’, but its cleanness costs it some force. This wouldn’t necessarily be a problem, but one also always wants the hooks to be stronger, catchier, and more irresistible; Get Tragic leaves the impression that it’s neither as fun nor as fierce as it could be.

One of Blood Red Shoes’ most notable characteristics is the interplay of Carter and Ansell on lead vocals. Their two-hander allows for some unexpected turns of tone that counterbalance the mild predictability here. One wishes they duetted more, as opposed to simply taking turns on different tracks; the pair trade short refrains and a few oooohs on ‘Mexican Dress’ and ‘Find My Own Remorse’, but that’s about as far as they go. The latter is probably the highlight of the record, its strong chorus well-sold by Ansell’s lead vocal and complemented nicely by the drawn-out guitar lines and stately tempo.

By and large, though, Get Tragic comes across as rather slight. Its lyricism isn’t especially inspiring –lines like “I’ll be waiting on my own” and “everyone is always on my back” constitute hooks – and dances with cliché: “up-and-down like a see-saw” are the emotions on ‘Eye to Eye’. The record’s close is also fluffed; the energetic peak of ‘Vertigo’ fools one into thinking it’s the end of the album before ‘Elijah’ tries to repeat the trick, and does so with an overcompressed-sounding, high-NRG grind that only seems notable because it’s loud.

This is a fun album from a fun band, and festival line-ups are the better for Blood Red Shoes staying in the business. But, more deeply, Get Tragic is somewhat lacking in character; at times it has the air of a post-punk-revival-era Blondie, at times it’s doing a decent impression of Arctic Monkeys, perhaps one of Jack White’s many projects, or Band of Skulls. It’s solid, respectable and entertaining, but doesn’t bring a lot to the table, aimed only at those who consume twenty-first century alt-rock like they do oxygen. Still, if that’s you, you’ll have a blast here.