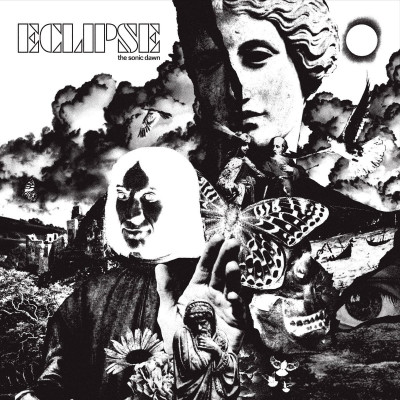 Eclipse by The Sonic Dawn

Steeped in the of West Coast psych, with Love being a particular stand-out, the new album from Danish psychedelic travellers The Sonic Dawn is a glorious burst of sunshine on a scene increasingly devouring itself with extended jams and deep dub/jazz outings. They may not do “original”, but they sure know how to hit a groove and throughout sounds Eclipse you find yourself recalibrating all your reasons for why you love psych in the first place.

It’s in the joyful lurch of ‘Forever 1969’ that you get notion of exactly where The Sonic Dawn are pitching for. It’s a classic era imbued with a sense of pop and song-writing which pulls you in as a listener, offering stark reminders to the joys of yesteryear. The Sonic Dawn make no effort to sound contemporary in anyway either, but that is all part of the charm. Even the production sounds like it has that old “60’s dust” still hanging off it.

Like all those great 60’s albums much of this album sounds like a bunch of disparate singles hung together. Songs such as ‘Psychedelic Ranger’ or ‘No Chaser’ are three minute wonders, which base themselves on the power of the song, rather than the album, and with that come a sense of freedom from the album format. Not for them the drawn out concepts and elongated jams. Instead they open up the psychedelic toy-box of wonders which we all though had been picked clean by bands such as The Kinks, The Byrds, and poppier fare like such as The Turtles.

There are also moments of introspective searching such as on the excellent ‘On The Edge Of Our Time’, which takes a freakier ride on the back of a Vox organ, or in the mysterious ‘The Last Page’, which itches at the edges of a bad trip before a yearning chorus leads us into the light. Whilst these add flavour to the album, it is in the happy clappy ‘Christiania’ or the iridescent ‘Love Bird’ that we find ourselves migrating, in need of a hit of joyful acid drenched psych.

You may have heard it all before, but when it’s delivered in such zest as this you would be remiss not to enjoy the album for what it is. It’s a wonderful reminder of times gone by, and in the power of good song-writing and melodies. Whether there is ultimately anything substantial would all depend on your point of view and in particular, what you look for within psychedelic music, but as a standalone album of pop songs, it’s a remarkable feat. All hail the return of the 60’s sound.