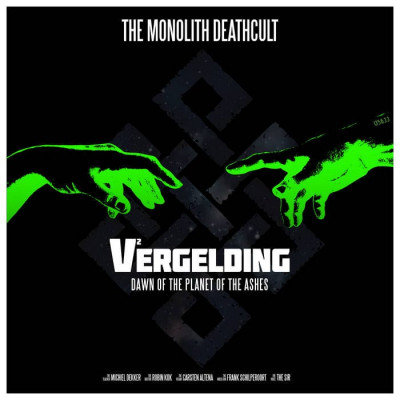 The Monolith Deathcult don’t take themselves too seriously. With V2 – Vergelding, the second instalment of the Tragic Trilogy, “The Monolith Deathcult disappoint better then they’ve ever disappointed before”. The press release for this retaliation-themed album of metal bangers sets out to describe a creature arising from this cruel world of death, Monolithicus morticultis… aka The Monolith Deathcult. The creature is a multi-limbed monstrosity that tears down all in its path, “communicating with its observers through a series of pounding percussive rhythms and squalling eruptions of ear-scraping distortion.” The album is as playful as the PR material, with an intro, outro and interludes of a mock-Attenborough voiceover describing the reign of terror of this sonic leviathan. It’s all pretty slick, and the muscular riffs of the songs in between all fit in very well with this story. MD play a very listenable brand of in-your-face death metal, the production and the riffage all being pretty clean-cut and only the gutteral rasp of Michiel Dekker really giving that death metal edge.

The band often use samples from film and this album is no exception. Intro ‘Planet Wrath’ is strewn with them, including from Terminator and A Clockwork Orange, and it’s only on second track ‘Dawn of the Planet of the Ashes’ do the guitars kick in. The thundering industrial sound gives a strong nod to Ministry. The video to this single apes a videogame set in space and the pace, blasting guitars and repeated samples of the track match it perfectly.

‘Come Forth Lazarus’ and ‘Fist of Stalin’ are both mid-paced bruisers that continue the barrage yet all too soon fifth track ‘The #Snowflake Anthem’ feels like an outro of sorts, reprising the faux-Attenborough voiceover. Final studio track, ‘Rise of the Dhul-Fakar’, is a furious final assault, the heaviest on the album. After that there are two live tracks, ending with the immense ‘The Furious Gods’, from their previous album, Versus. Possibly their finest hour, ‘…Gods’ heavily samples the movie Whiplash, the best and most intense movie about drumming and obsession you’ll ever see. This bonus material is a treat, but it would have been nice to have eight new tracks.

With an intro and an ‘outro’, plus two live songs, the eight tracks of V2 feel a little light on new material. What’s there is good, bombastically heavy stuff, and as ever I enjoyed MD’s playful take on a genre that all too often takes itself far too seriously. But more new songs next time would be great. “The Monolith Deathcult are a threat to modern art and culture” (their words): V2 – Vergelding is a soundtrack to the fall of civilisation. Listen with tongue firmly in cheek.