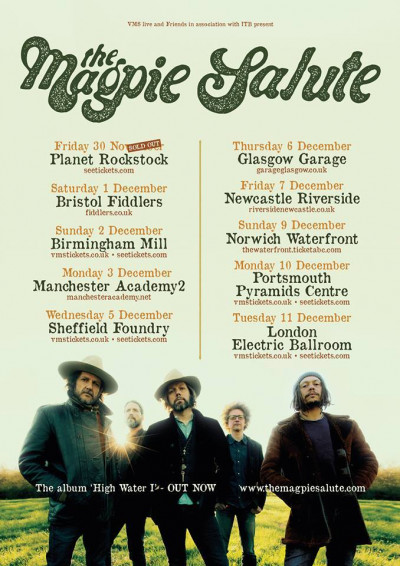 The Magpie Salute at Electric Ballroom

Any band formed out of the ashes of a successful and cherished group like the Black Crowes is always going to have to face not only comparison issues, but calls for renditions of the former band’s back catalogue. When this happens about twenty minutes into the set of Magpie Salute’s last date on their current, full band, electrified European tour, Rich Robinson’s responds rather surprisingly with a blunt and tetchy riposte: “Are we the Black Crowes? You’ve come to the wrong show. Maybe we should have a suggestion box so you can write my set-list” – and this doesn’t seem to be delivered with any notion of deadpan humour.

But even though Magpie Salute are intentionally linked by name to the Crowes and, also consisting of three former Crowes members – Rich Robinson, Marc Ford, Sven Pipien – this is no nostalgia trip. Yes, there are many covers littered throughout the one hour and fifty minutes set, even four Crowes’ songs loaded on at the end, but don’t expect the hits, as they plough deep into the Crowes canon with ‘Horsehead’, ‘Exit’, ‘Oh Josephine’, leaving ’No speak no slave’ as the most familiar Crowes’ song covered tonight.

The vast array of electric and acoustic guitars stacked at the side of the stage are no stage props, as virtually every song interlude sees a changing of axes. It might be seen as showing-off, but showboating has never been Rich Robinson’s or Marc Ford’s style. Arguably the Crowes were at their peak with Marc on board, and seeing the two guitarists trade licks, guitar harmonies, and riffs, effortlessly and as natural as spring water is a delight. The opener ‘High Water’ sets the tone with an extended jam while ‘For the Wind’, the two ballsy rockers ‘Mary the Gypsy’, and set-closer ‘Send me an Omen’ showcases the quality from this year’s debut of self-penned material – High Water I.

Mixing it up will probably always be in the Magpies DNA, as they naturally stride into a trio of acoustic numbers around the midway point, with their own ‘You found me’ and two covers including the Bob Dylan penned ‘When I paint my masterpiece.’ In fact, whatever they do tonight, in whichever style, they are all delivered with a maturity you would expect, but each one stands alone as a hallmark of a good song. Add in vocal harmony contributions by the three former Crowes, either individually or in unison, and it opens-up the possibilities to even wider avenues. This helps out events tonight mitigating a minor quibble with the sound level of John Hogg’s vocals, which sometimes get lost when they rock up the volume.

It will also of interest to see if the covers reduce as their own Magpie canon expands. But on tonight’s evidence, while the crowd were initially respectful, they grew louder as the gig progressed; and this may be an indicator that a bigger love and appreciation of Magpie Salute will enhance and grow over time.