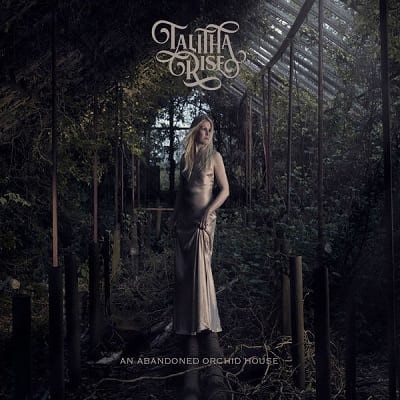 Whenever I would discover a new artists or band, whether it’s from an album trailer or sometimes from their Bandcamp website, I know something that my ears would perk up at the right moment. And it did by listening to this incredible singer-songwriter from Sussex in the UK named Talitha Rise. Her debut album released via Coven Tree Records this year entitled, An Abandoned Orchid House details the subject issues of alienation, loss, and the struggle and courage to find hope in their lives.

The album was recorded in many locations. From living rooms and kitchen tables in Devon and Scotland, to a beautiful Manor House in Sussex. But the main recording was done at Bubble Studio at Sussex also where Talitha recorded her vocals, guitars, and keyboards while Martyn Baker played the drums and does some multi-instrumental parts on the album.

This has a haunting yet surreal beauty to it. This isn’t your typical folk album. Now I wouldn’t compare her to Tori Amos, but there are some aspects between Alison Krauss and Iamthemorning’s Marjana Semkina. And Talitha herself has delivered something special that goes beyond the genres of singer-songwriter and folk music like nothing you’ve ever heard before.

‘Hungry Ghost’ is Talitha’s nod to The Beatles ‘Dear Prudence’ and her resemblance towards the sessions of The White Album. She keeps the spirit of John Lennon’s legacy alive in her music and making sure the spirit of his sound will keep growing more and more. ‘Valley’ is an eerie acoustic fingerpicking arrangement.

This is Talitha entering the swamps of Louisiana and the styles of Alison Krauss and Robert Plant’s Raising Sand with this Americana vibe, but with a psychedelic twist thanks to the Sitar droning into the raga atmosphere. On ‘River’ it is Talitha’s struggle to get away from the past by moving into the future to see where her next chapter would be.

When I was listening to the intro, it almost reminded me a little bit of the introduction to Roxy Music’s ‘Bitter-Sweet’, but then the string sections help her out to sing in a different language after it changes for the character to be finally free from the pain the suffering they went through for many, many years. ‘Chapel Bell’ is a mournful song with a strong piano section that gives us the signs of the woman who is supposedly to get married, but begins to realize something has gone horribly wrong.

Talitha is bringing this story to life as the mood suddenly changes into a rising post-rock atmosphere as everything around this character inside this chapel, begins to crumble down like a ton of bricks collapsing on her that everything has gone awry. The mournful 3/4 opening waltz of ‘Orchid House’ begins to open the door of a house that once was beautiful, is now gone into this abandonment.

I can her in this song that Talitha challenges her vocals between hints of Renaissance’s Annie Haslam and Bent Knee’s Courtney Swain. And believe me, she knows how to reach those notes well. It can be as I mentioned a challenge, but she hits those notes one by one.

An Abandoned Orchid House is like a flower bursting into bloom in real time. And Talitha Rise carries the essence of folk, progressive, post-rock, singer-songwriter, and spirituality to be free from isolation. So if you’re sick and tired of the same old Taylor Swift songs that she whines, moans, and complaining about her exes in one of her bull-crap songs and not to mention of course hearing the same nonsensical crappy music from mainstream American top 40 radio by the self-indulgent Ryan Seacrest, then delve into the waters of Talitha Rise’s An Abandoned Orchid House.