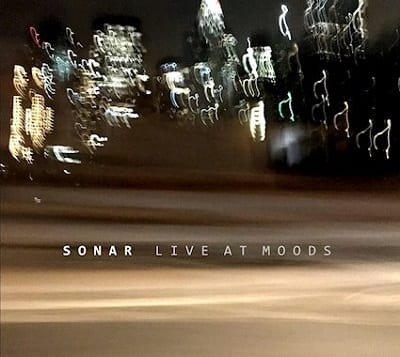 Live at Moods by Sonar

If you think that Vortex was a real surprise this year from the Swiss masterminds of Sonar, then you’ve haven’t heard anything yet. So, be prepared again to go back again for another exhilarating live recording they did at Moods Jazz Club in Zurich, Switzerland on May 24th of last year. Featuring David Torn’s incredible guitar loops while he lends Sonar another helping hand. And the ensemble, they are releasing more energetic forces than ever. It’s almost as if the doors have suddenly burst open at the right exact moment. And in the words of Ren and Stimpy’s short of Space Madness, “Okay Space Cadets! Prepare to hurtle through the cosmos!”

They not only performed three tracks from the Vortex album, but one track from their second album Static Motion released in 2014. And another track from their debut album in 2012’s A Flaw of Nature. The ensemble and Torn are this perfect match, perfect combination, and a perfect team that work well together. And it brings them even closer by creating more and more dynamics with some unexpected twists and turns for the audience to be blown away from one of their compositions to another.

Listen to ‘Lookface!’ it has some incredible screeching introduction to fill the club as if some snarling beast has been unleashed. You can feel the intensity between Kunter’s dooming bass and Torn’s loops by heading down into a deeper, darker path. Thelen, Wagner, and Torn come up with this back-and-forth challenge as the gauging heat level increases by Pasquinelli’s drum work.

‘Twofold Covering’ which is from their 2014 release Static Motion, opens up the album up with a big bang. David here is at his game. He and Sonar do this cat-and-mouse chase inside this big giant Rubik’s cube. He raises the levels up a notch while the quartet themselves increase more dramatic scenarios to keep up with the pace.

They not only give David Torn gigantic amounts of free-rein, but they are in awe of what he will come up with next. And it is this droning evil yet brutal force that is waiting to hit you really hard like a bulldozer that is coming out of the woodworks at 12 minutes and 51 seconds.

David’s composition ‘For Lost Sailors’ which is also on the live album, takes the audience in the middle of the Atlantic Ocean on an abandoned ship that once the sailors were once at their pinnacle success, have now disappeared and the ship is completely empty. You can almost feel a pin drop inside the control boards while David’s rumblings, backward sounds, and his sections twisted musique concrète has some of these industrial rocking vibes by filling up the entire space with some feedback a-la Velvet Underground style.

And then in the last three minutes of his piece, it then goes into some very ominous sequence for the ship to stop at dry land. And you can start to realize that the ghosts will haunt this boat for many, many years to come. ‘Red Shift’ and ‘Tromsø’ are now two of my favorite tracks from the Live at Moods album. The live versions of here, gives the audience a lot of rooting and support to let Sonar kick into interstellar overdrive.

I can feel the ensemble challenging the music between both the Krautrock genre and King Crimson’s Starless and Bible Black-era. The guitars go into the crossover elements between Robert Fripp and NEU’s Michael Rother’s textures as the caves suddenly get more and more dangerous. And it becomes this adventure that will keep you guessing until the very end.

I have to say this, Sonar’s Live at Moods released by 7d Media (Trey Gunn’s record label), captures more of the band’s dynamics and brutal strength from start to finish. This isn’t going to be just your typical prog-rock album, but this is an album that can really shake the rafters at any second. From the experimental, avant-garde, jazz, atmospheric, and creative forces behind their music, Sonar delivers the goods and the flaming fires that are on here. And it will never, ever burn out. I guarantee it.