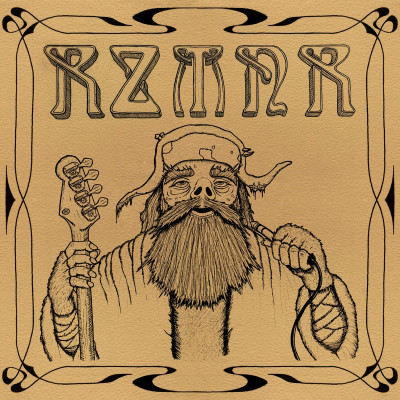 J.R.R. Tolkien’s fantasy epic Lord of the Rings has inspired countless artists in the decades since its publication. Adding their name to a list of acts as diverse Led Zeppelin and Summoning is Belgian stoner-rock trio RZMNR.

Their debut, self-titled album is a collection of five instrumental jams themed around the five wizards of Middle Earth, also known as the Istari. Each song title is written in a stylised version of the wizard’s name in the various tongues of Middle-Earth – though it is beyond the remit of this review to explore Tolkien’s keen linguistic studies as evidenced in his books. RZMNR power through the two least-famous Istari first: Blue Wizards Alatar and Pallando with the songs ‘Älatär’ and ‘Pallándø’. Instrumental stoner rock could very easily be a languid affair, lazily crawling through sludgy riffs until the listener gives up. RZMNR manage to keep their songs pacy, particularly in this opening salvo. Across ‘Pallándø’, Maxim’s drumming keeps the trio grounded, allowing the sludge/stoner riffs from Yannick on guitars and Ruben on bass to sprawl without feeling lazy or repetitive.

‘Curunír’ is up next, a song named for one of Christopher Lee’s best villains, Saruman. Far from concentrating on his villainy and making the song a dour, doom-laden number, it rockets along at quite a pace. Yannick’s guitar sounds bright, the riffs practically bouncing off each other towards the song’s conclusion. Following on is ‘Radagast’, named for the one in the Hobbit films played by Sylvester McCoy that, yes, had bird poo on his head. The intro may sound very simplistic, but it helps if you treat it like the character in this one. What you initially get isn’t the whole picture. Yes, a former Time Lord had to suffer wearing bird poo, but he was able to pull it out of the bag to prove his worth across the trilogy of Hobbit films. So too does his song. It’s got much more weight to it – and sounds as if it might have been written by Stoned Jesus in their First Communion days which, to this reviewer, is only a good thing. Psychedelic flourishes – played purely on guitar but sounding almost like a synth – round it out nicely, proving that RZMNR aren’t just a one-trick stoner-rock pony.

Closing the album is ‘Mithrandir’, named for one of Gandalf’s nicknames. And, just like Sir Ian McKellen’s epic interpretation onscreen, this song pulls no punches. The opening riff is as hefty as a blast of magic from Gandalf’s staff, and the song continues in that same vein across its run-time. Again, there are some psychedelic flourishes to round it out, but it’s the melody that works best on this one. It feels very dramatic, with something of a wistful edge to it – not an easy thing to conjure in sludgy stoner-rock! As it builds in pace and tempo towards its conclusion, the image conjured is that of Gandalf wielding his power at its fullest. However, much like his fall at the Battle of Khazad-dum leaves the viewer wishing they had seen more of him, the song’s abrupt end leaves the listener wanting more of RZMNR’s riffs.

And what good riffs they are. Beyond ear-worms, which some stoner riffs can be, they frankly just sound good. It’s a pleasure to be wrapped up in their sludgy embrace. Sludge and stoner-rock can also sometimes suffer from too much distortion and lo-fi production values that over-emphasise the “lo” – not so here. Every instrument is given its due in the mix thanks to producer Laurens Primusz – meaning listeners are able to enjoy Ruben’s wandering bass lines without having to strain to hear it, and that Maxim’s drumming doesn’t drown out the other two artists. The trio’s chemistry is also impressive – Maxim’s drumming keeps them anchored to (Middle) earth, even as the guitar and bass-line want to go off wandering into the stratosphere. This prevents everything from simply become a sludgy mess of riffs and noodling, which could easily happen to such a band.

In sum, RZMNR’s debut showcases strong craftsmanship, and excellent chemistry between the players. The production is as murky as you’d want a stoner-rock album to exhibit, but without losing anything to an excess of distortion. Let us all hope 2019 brings more from these Belgians.