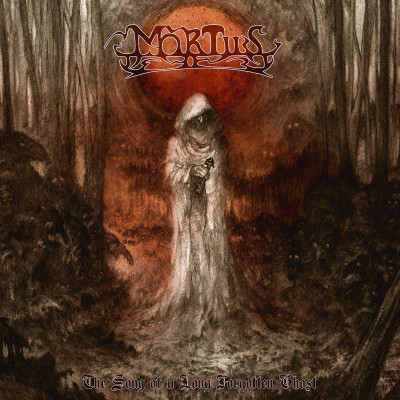 The song of a Long Forgotten Ghost by Mortiis

The story behind the demo cassette which launched the solo career of Mortiis, aka Håvard Ellefsen, is the story of the birth of the dungeon synth (sub)genre and a matter of underground legend. So this rerelease of the demo on Funeral Industries – “carefully restored and remastered by Jules Seifert at Epic Audio London, in close collaboration with Mortiis” and featuring a new interpretation of the original visual artwork by regular collaborator David Thierree – is quite an event.

The Song of a Long Forgotten Ghost materialized from the blood, woodsmoke and buzzsaw guitars at the epicentre of the Second Wave of Black Metal in Norway during the early 1990s, with Ellefsen beginning his career playing bass and writing lyrics in Emperor. But it marked both a radical personal and musical departure from the scene. While Ellefsen would famously cease to be a member of the band in 1992, and it was with a synthesizer that the name of Mortiis would ultimately be made, the links to Emperor and the scene in this tale are seldom far away. Ellefsen was fired from the band in a phonecall from mastermind Ihsahn, to which he recalls responding “Okay, but I’m taking these lyrics” in reference to two of the band’s most popular tracks, ‘Cosmic Keys To My Creations And Times’ and ‘I Am The Black Wizards’, from the debut album In The Nightside Eclipse. Seventeen-years-old and “of course still living at home”, Mortiis decided to take his stage name for his solo career, thinking “Fuck people, I’m going to do this on my own.” The safe option would have been to form a separate black metal band and channel his interests into that. But Mortiis did something far more radical.

Written and recorded approximately between May and June 1992, The Song of a Long Forgotten Ghost was the culmination of an especially fertile year for Mortiis, spent exploring a wide range of early dark ambient music and its related styles. Having acquired a basic keyboard and recorder, Mortiis recorded music that achieved something like the atmosphere of his previous band, but with one fifth of the instruments. Despite his modest equipment, Mortiis’ vision was not lacking in ambition, emboldened by the noblest of aspirations: “My idea back then […] was to go to a Transylvanian castle and record the demo there.” While such an auspicious event did not come to pass – as he explains: “you have to remember that I was straight out of a whole extreme metal scene, with all the craziness that was going on, and that I was not realistic by any stretch” – a more mundane but no less influential venue for recording presented itself. Mortiis describes his bedroom as “pretty desolate at the time, a bunch of black and not much else”- a room in fact fetishized by many in the dungeon synth community, who obsess over and collect the posters, medieval artifacts and other paraphernalia amassed by Ellefsen – and it was there in which he recorded the epic 59-minute demo. Generally regarded as one long track, the piece was actually recorded as several separate sections and then stitched together afterwards. Mortiis played his parts while none other than Ihsahn himself operated the controls to the 4-track tape recorder, whilst “reading Conan magazines”. To add even further weight to this legend, the 4-track in question was very possibly the device on which Emperor’s legendary demo album Wrath of the Tyrant was being recorded around this time. Both Wrath and Song were self-released (in 1992 and 1993, respectively) helping to forge two careers which, while very different and separate, are bound by common artistic themes and atmospheres.

Dungeon synth is suffused with Medievalism, Romanticism, the Gothic and the Fantastic; and what artists like Mortiis may lack in formal musical training and technique, they make up in the ability to convey very particular and precise musical atmospheres using little more than an intuitive sense of melody and harmony, and some basic technology. The original recording of Song is immersive, hypnotic and arresting; it is difficult to listen to without conjuring up images of warriors traversing haunted woods, armoured orcs clanking through dead fields, or – yes – Carpathian castles. The reissue version immediately sounds crisper, louder and clearer; it has certainly been cleaned up, but retains the glorious hissy, warbled feel of all low-fi cassette recordings. The most immediate difference, to my ears at least, is that the sections are joined a little more smoothly than on the original, on which – once you know that Ihsahn stopped the tape in-between – you can just about hear the gaps, albeit very briefly.

While I haven’t counted the bar lengths, Song is structured very roughly as follows: Intro/A/B/A/B/A/B/C/Repeat x2. Then D/C/D/C, before returning to A/B/A/B. Then E/A/B/A/B/E/C/D/C/D. Then A/B/A/B/D/E, with an outro. It begins with a sparse, six-chord piano vamp, becoming A by adding a darkly-jaunty arpeggio melody, using a kind of sustained organ sound and an occasional cymbal marking the transitions – black-sailed ships arriving at shore perhaps. This alternates with B, a more intricate and medieval-sounding section, with a wheezy harmonium patch – telling tall tales around the throne room. When the first C section arrives, it is the most surprising moment on the recording: an awkward and menacing bass-note piano fill repeats a couple of times before segueing into hard stabbing notes, and a sinister passage full of movement and dissonance – disbelief, violence and fleeing through the woods. It’s difficult not to think of the soundtracks to 64-bit console games like Golden Axe II and Streets of Rage, here. (There is actually recording of the demo floating around the ‘net which cuts to oddly lo-fi black metal at this point, as if Ihsahn had accidentally taped over Wraith on the 4-track. But I’m none the wiser about this version.) You can still hear the tape become a little muffled, following this section, as it did on the original recording.

This cycle repeats once more, bringing us roughly to the half-way mark with a gong splash, and another warble of cassette carbon, threatening to kill the whole recording for a second. The D section is basically a reprise of C, stabbing bass keeping the urgent rhythm, with another, more wistful harpsichord melody over the top – an encounter with the titular ghost, deep in the forest. This section sounds a lot like the keyboard-led sections of Cradle of Filth’s seminal Dusk…and Her Embrace, released four years later, charting further another potential site of influence. The outro is one of the most successful sections on the album, with bold percussion over a higher-pitched, ascending melody – the ghost wandering off into the distance, forgotten once more until another haunted day. A brash gong shivers into silence…

If this description makes the structure sound pretty complicated – and like I say it’s a very rough analysis – it still doesn’t do justice to the complexity of the arrangement, which, like Sleep’s Jerusalem/Dopesmoker, for example, is impeccably designed to sustain the listener’s interest for a full hour, gaining rather than suffering from its length. Song is repetitive, with A constituted by many identical phrases playing over and over – so repetitive, in fact, that it could be treated as drone music, the monotonous build-up of which achieves something much more than the sum of its parts. Compared with Mortiis’ later Era 1 material, Song is more straightforward, with less layers; and its melodies are perhaps less memorable than some of the tracks on Crypt of the Wizard, which are almost catchy. But it’s a demo after all and still captures that wonderful sense of atmosphere which is the reason why many of us listen to dungeon synth in the first place.

Ever the outsider artist, Mortiis’ rejection from Emperor was deeply ironic – rejected by the most un-compromising musical scene of all for his inability to compromise – yet auspicious, because without it there may well have been no dungeon synth, no Balrog, no Uruk-Hai, no Elrang, no Old Tower. Has the demo stood the test of time? Absolutely. Mortiis manages to be simultaneously ahead of his era and lingering in the deep past, so this recording will always sound both fresh and ancient. This ghost’s song will be remembered for a long time to come.

The Song of a Long Forgotten Ghost is available now, digitally through Omnipresence Productions on iTunes, and physically through Funeral Industries (here), or direct from Mortiis’ Bandcamp store.

All quotations from Mortiis are taken from the expanded edition of Secrets of my Kingdom: Return to Dimensions Unknown by Mortiis and Dayal Paterson, published in 2018.