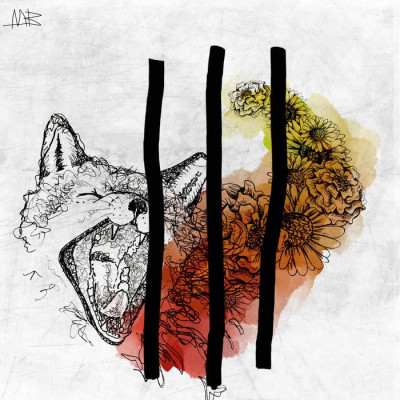 M B I I I by Moodie Black

Moodie Black thudded onto my desktop in late 2018 and shoved their glitch-laden noise rap right in my face. Hailing from Los Angeles, MB have been doing their thing for a decade, and their sound has evolved. M B I I I, their latest EP, puts them at peak glitch, top of their game in creating dark, unsettling beat-laden monologues.

First listens set my teeth on edge (not a bad thing – I’m sure it was supposed to) but with effort this short EP got right under my skin. Initially there are overwhelming comparisons with Dälek: the low thud of the bass, the deep timbre of the rapping, the menacing groove and the numerous un-musical noises that work together to make this challenging music. But Moodie Black have their own niche in the noise rap scene – their rapping is more upfront, less in the background, than Dälek, and it’s a helluva lot more up-close and personal than Planet B.

‘m o s s’ opens with a caustic glitch, a scrape of noise, giving way quickly to the intimate rapping of the MC. There are lots of dark, droney synths in the background, underpinning the voice. The words are everything here, and betray tortured feelings in the rapper’s mind: “I’m paralysed, I’m compromised … when introduced to things like this, … I see no reasons left to rap, I love it but I’m pacifist … I’m at the end of all these ropes”.

It’s no easy listen, in particular with second track ‘p i n k p o u t’ featuring what sounds like a drill being put to someone’s head (with accompanying cries of pain). But the moments of unease are skilfully mixed into the atmosphere that is built up by the music. Highlight for me is ‘p r i v i l e g e’, the single of sorts (it’s the main track on the album’s Bandcamp page). This track has a bigger sound and a full-on woozy guitar drone that lifts the EP to the next level. Closer ‘gasp, then’ is an equally up-front glitchy rap that breaks on occasion to single piano notes, which adds to the tension of the rest of the track.

Unsettling, uncompromising and full of dark groove, M B I I I could be the atmospheric soundtrack to your disturbed dreams.