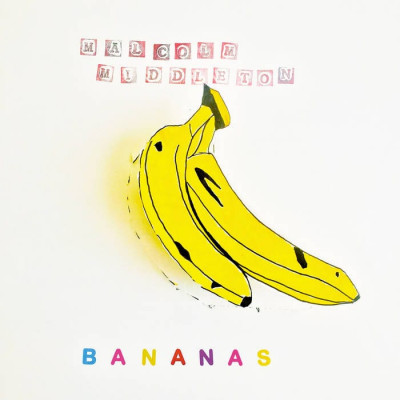 This was released quite a while ago, but even in this age of “Now, all of the time” there are some things that are worth taking far too long to mull over and find the place where something good, moving or damning can do its best work.  I’m typing this on New Year’s Day which, given the general subject matter, might seem wholly inappropriate.  Then again, it makes perfect sense to me, so I guess this is where I currently am and it will also feel right to anyone else of a similar frame of mind.  hopefully, all will become abundantly clear once this intro is out of the way.

I’m not sure I’ve listened to something that so surgically cuts through the Human Condition quite as much as Bananas does.  Malcolm Middleton, familiar to many as half of Scottish Indie types Arab Strap or all of Human Don’t Be Angry, comes up with something that forces some uncomfortable home truths about self-doubt, depression and anxiety right into our faces by virtue of being (mostly) so bloody musically cheery about it that it’s all we can do to listen to it and be exposed to the horrors all over again.  This is the work of someone who knows how to wield a hook in a song, both as a way to pull someone into a song and as a tool to get painfully under the skin.

It all starts off jolly enough.  Bright guitars and a jaunty drumbeat mask the lyrics to ‘Gut Feeling’ from the first-time listener, but the chorus is as lyrically stark as it is: “I’ve got rows and rows of wankers inside my head / Shouting my gut feeling down / All the fuckin’ time,” and from then on it’s a minefield of self-reflected insecurities and worries about all things internal and external, as just when you think you’re used to the world painted by Malcolm, he manages to pull a line out of nowhere that brings everything back into jagged focus.  The line “A better use for this pen would be to stick it through my chest” during the beautifully meandering album highlight ‘Buzz Lightyear Helmet’ jumps out and kicks me every time.

All this could be awful to take in if it wasn’t for the entirely inclusive nature of the record as a whole.  Pretty much everyone who will buy into Bananas will feel an understanding and a kinship in here, thanks to an overarching warmth and a welcoming space in which to empathise, clap along to, or just sing along with the sweary bits.  ‘Man Up, Man Down’ reminds me most of his HDBA work once the 10CC intro is out of the way and would make for a great ’80s-inspired pop track if it wasn’t such an excellent treatise on loneliness and an inability to fight it, or indeed if it wasn’t 6 minutes long.  ‘What a Life’ is an achingly gentle, beautiful and self-deprecating tale of love that it would fit perfectly at the end of Raymond Briggs’ When the Wind Blows, and works even better for following ‘Love i a Momentary Lapse in Self-Loathing’, a bitter view on the same subject with its rousing “Fuck off with your happiness” chorus.  ‘Salamander Grey’ closes the album on a sombre note (which comes as a bizarre surprise), but still comes with its moments of sunshine; everything (both human an instrumental) that goes into the word “Home” is devastating.

It’s possible you might not like this record.  I do.  Dwelling on the lyrics can hurt, in a way I’ve not experienced since Josh T. Pearson released Last of the Country Gentlemen.  The subjects of debt, isolation and having to cope for the sake of others are bloody raw for some and hard for anyone to take in.  It can be a hard listen if the mood is wrong, but that’s the same for anything if you think about it, it’s just that this wears its heart on its sleeve more than most.  The sheer humanity and the love of what Malcolm Middleton doing with Bananas here is something that, if it catches you in the right frame of mind at the right time, will feel like the friend you never knew you had.