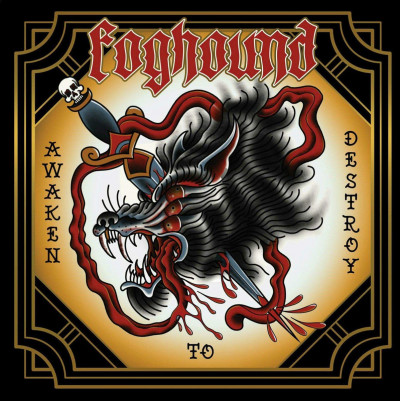 Awaken to Destroy by Foghound

To say the making of Foghound’s follow up to 2016’s The World Unseen was created under very extremely difficult circumstances, is somewhat of understatement. While work began in November 2016, and a sequence of ill-health issues and personal commitments intervened in its early creation, it was in December 2017 the band suffered the most tragic of events. Bass player Rev. Jim Forester was shot and killed outside his place of work, a victim of a possible robbery. After the process of dealing with such a devastating shock and, one can only imagine, an array of subsequent emotional challenges, after much deliberation with close friends and family members Foghound decided to complete the album in his honour.

Awaken to Destroy is the result, and all of those involved in the project can be very proud of their achievements. To prepare what lies ahead, take- a look at the album cover, the head of an untamed, sharp fanged, wolf-beast. And right from the off, Foghound sound urgently energised as the opening title track is a mid-tempo rager, building up the intensity before unleashing a snarly, gnashing-teeth, of a chorus.

Ferocious speedy upfront riffs are in abundance in conjunction with hurtling tempos in ‘Known Wolves’ and the out-bursting, aggressive stoner rock rampage of ‘Cut the Chord’. While mixing the mid to fast tempos works a treat on ‘In Due Time’ and ‘Gone Up In Smoke.’ Stellar work by producer Frank Marchand ups the gritty rawness which packs a mightier punch than the previous The World Unseen. Also, the three members who contribute vocals – Chuck Dukeheart III, Bob Sipes, Dee Settar – deliver and balance sounding anguished, angry, at-times even bordering on feral, while keeping it all on the right side of maintaining the good melodies.

In fact, the album has a varied range of tempos and atmospherics as ‘Ave’ – penned by Jim on acoustic guitar as an idea for a song, successfully kept from the original recorded demo tape – provides a much-needed short instrumental breather before the pace and volume picks up again with the chugging intensity of ‘Keep On Shovelling.’ And in ‘Staring Down the Demons’, they have succeeded in writing that rock ballad rarity, one which possesses a spirited, impassioned sensibility which still rocks, while cheesy sentimentality is successfully avoided.

The mood becomes darker on the closing two tracks with the atmospheric desert rock fuzz of ‘The Buzzard’ and the closing stoner/psych rock meltdown ramble of ‘Death In Tremble.’ The latter was the last to be recorded and is a fleshed-out song from a jam dating back from when the recordings initially began.

How Foghound respond further to the aftermath of their friend’s senseless, awful murder, only time will tell. But, with Awaken to Destroy they have made an album which has energy, riffy urgency, tight-but-loose ferocity, which fans of The Obsessed, Motörhead, Fu Manchu, Kyuss, Clutch, Orange Goblin, Corrosion of Conformity, should find time to lend their ears to. Awaken to Destroy is a most fitting album to honour their sadly departed comrade.