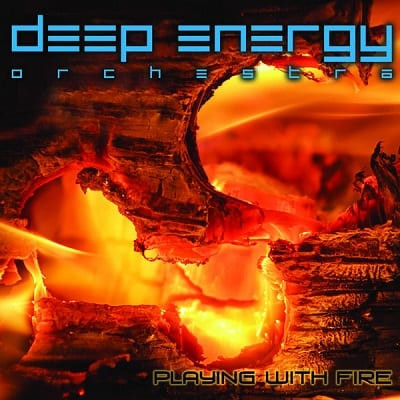 Now this here took me into a whole new level and a couple of listens by entering into the universe of Deep Energy Orchestra. Their music is a cross between classical, Indian, progressive, and fusion into one. And it takes you on their magic carpet ride to incredible exotic locations and different areas that you’ve never seen before.

Recorded over a two-day session at the Jack Straw Cultural Center on October 4th and 5th of last year, Playing With Fire is a journey like no other. Released via 7D Media, world-class musicians came together from various genres to record a full evening of music that was done in a week.

The genesis behind Deep Energy Orchestra was composer and Fretless bassist Jason Everett (Mister E). And he brought the musicians simultaneously including King Crimson, Security Project, and the man behind 7D Media, Trey Gunn on Warr Guitar. When you bring people like that into the cultural center, you know that something spiritual is going to happen.

This is also my introduction the sounds of the drumming and percussion sounds of both V. Selvaganesh and not related to the Innerviews: Music Without Borders journalist, Anil Prasad. Now with Selvaganesh, I’ve always wanted to check out his work and his textures on how he played the drums he customized and the usage of the Kanjira.

Not to mention the four highlights from that incredible performance they did at the Cultural Center. When you watch or listen to ‘Awakening’, you can just close your eyes and being in the heart of India. Everett’s 6-string acoustic bass, Trey’s Warr Guitar, and the incredible 7-string electric violin work by Radhika Iyer, they’re filling in the gaps to take you on their quest for guidance and finding your own true self.

Anil’s tabla lends support by creating some intensive rhythms as if you are caught in the middle of this horrible rain that just came out of the blue unexpectedly. Iyer’s violin work brings some of those eerie atmospheres before Trey’s Crimson-like sound from his Warr instrument that he will keep you guessing more and more unexpected questions. Gunn, Iyer, Everett, and Selvaganesh, they would come up with some mind-blowing ideas until reaching the finish line.

Listening to ‘Mysterious World’, it feels like something straight out of King Crimson’s THRAK sessions as Gunn takes us into an unbelievable parallel universes through the Crimson sounds to capture some of the increasing temperatures into a higher level. Then, Iyer’s violin does this dualistic collaboration between her and Everett’s 7-string Fretless bass.

Iyer captures the workout while two of the violinists and one of the cellist Rachel Nesvig, Aleidia Gehrels, and Phil Hirschi follow Radhika in hot pursuit to keep up the pace as Iyer becomes a detective as she leaves some more clues for Nesvig, Gehrels, and Hirschi by picking up the pieces and making sure they’re on the right track.

They go through the ancient tombs of the gods by having some deeper yet puzzling hints before they head back into this vigorous incredible run towards the finish line. ‘The Return’ begins with this droning sound that is something straight out of the sitar as Everett starts things off with a Jaco Pastorius-sque introduction before Gunn and Iyer comes in to see what Jason will come up with next. But Trey and Prasad go into the deeper locations of the forest that is very, very hot whilst finding the lost cities in those neck of the woods.

The chemistry between the eight members that are on Playing with Fire, shows that this isn’t just band members recording at a venue, but to me, they’re family and working as a team by lending each other a helping hand. But one of the most unexpected moments that is on ‘The Return’, is Selvanganesh does a little bit of a fast-sped scat before the Congo rhythms go into the sounds of thunder and lighting.

Their cover of the Mahavishnu Orchestra’s ‘Lotus Feet’ which originally appeared on their sixth album, Inner Worlds on January of 1976, clocks in at 10 minutes. Deep Energy Orchestra honors the composition by staying true to John McLaughlin’s vision. You can imagine yourself looking at the beautiful landscapes of the Pacific Ocean and viewing its wonderful coastlines.

It brings this spectacular vibration of happiness in someone’s life from the violin sections to make it towards the end. The tabla is making sure that the sun makes it down as the violin arranges a sign of hope by seeing nightfall at the right moment at the right time. Everett’s bass comes marching in while Gunn follows the twilight blossoms through the meadow trees.

Prasad and Selvaganesh create more intensive vibes on their percussion instruments as you can hear Jason say to them “A Little Higher!” Now when he says that, you can know that it was the signal for not just the percussionists, but everyone coming together and making the levels go up a notch!

This is now my fourth time listening to Deep Energy Orchestra’s Playing with Fire. Again, I had absolutely no idea on what I was going to expect by listening to this incredible project. I wouldn’t call them a super group, because it would be too much of a cop-out. They are a family by working together as a team. And for me, Playing with Fire brings the Octet as one.