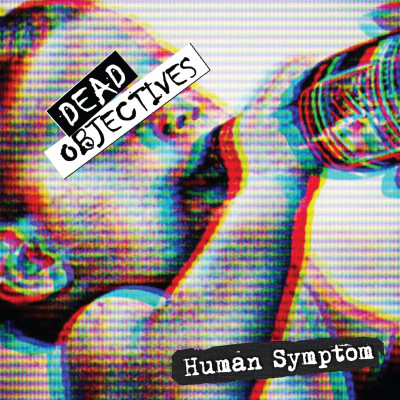 Manchester/Salford punks Dead Objectives is that rare and valuable thing, a band healthily comprised of 50% male and 50% female musicians*, y’know, very roughly mirroring the human race really, what an unusual idea! In 2015 they released a self titled 5 track EP and now at the end of 2018, they’ve unleashed their first full length album Human Symptom, 11 tracks of intelligent, well informed, incisive fury. In a society dominated by a media that will isolate events, disconnect symptoms from their causes, tell you what’s happened but not why here is the antidote, an album that points to structures and systems, that joins up the dots, reveals that our experiences are embedded in, and result from, economic and political structure. But this insightful lyrical intelligence isn’t at the price of the music, with Human Symptom Dead Objectives have released an album that hits your head and your feet.

First track up ‘Against the Grain’ reminds me of the struggles of Nigerian Ken Saro-Wiwa for the Ogoni people against the pollution of their homeland due to oil extraction and the dumping of waste (1), too easily we focus on the dangers caused by oil consumption forgetting the more localised devastation caused by oil extraction. This track says it all

“You undercut the people of the country for their resource,
cutting deals with corrupt leaders, from their pockets, for your own.
Your thirst for fossil fuels, shale gas and oil is archaic,
there are cleaner forms of power we can harness, we can hone.
After you destroy the environment we live in,
raping from the land all of the resource you can burn,
When it starts affecting your children and their living,
when there’s nothing left, will you listen, will you learn?”
All while the music builds, tense and unsettling-cracking start.

‘Grooming’ deals with the continual pressure we are under to accept and be assimilated into the status quo. Mark Fisher called it Capitalist Realism, the Situationists referred to ‘the spectacle’, the seamless representation of society and life from a capitalist perspective by the state, corporations and the media, the immersion of the individual in a system that tells you nothing else is possible, better just get on and make the best of this shit and stop dreaming, stop hoping. This track reminds us to not believe the propaganda, to remember that another world is possible and that resistance prefigures what could be.

Track 3 ‘Holy War’ and track 4 ‘Equality not Included’ engage with the power of brands and corporations, the latter track asking questions about where power really lies in a society where the blurring of the political and the corporate is pretty much complete and governments serve the interests of capital not the people, where people are only seen as exploitable labour and/or consumers,

“There is no freedom in a world that’s run by corporations,
corrupted governments bribed to change the legislation.
Big banks being bailed out by the countries where we pay our taxes,
despite all that, they have they put our lives under their axes.”
there’s a word for authoritarian capitalist governance by a political/corporate elite, now what was it? Begins with F…

Track 5 ‘New Environment’ slows the pace musically initially, with a nice riff going on in the background and the vocals intoned over the top before the whole thing bursts into furious life

You can probably guess what ‘May Poll’ is about! Musically this is awesome,  cue leaping around the living room with a clenched fist in the air!

“Communities lay in tatters, the UK’s lost its soul.
Ever since you came to power, we’ve danced around the May-Poll.
You won’t stay too long in that ivory tower.
A phoenix born of Tory flames; the oppressed will rise to power.”

‘Hollywood Hegemony’ deals with the construction of self and the easy retreat into the model of masculinity propagated by Hollywood, a masculinity marked by aggression, consumerist status and competitiveness. Smart track, male punks have too often been content to leave exploration and de/reconstruction of gender alone, lamely reproducing male privilege in the punk scene. Maybe this track could contribute to a moving forward in that area in the same way that Idles have sought to reinvent masculinity?

I’m guessing ‘Narcissistic Tendencies’ is about a (psychologically) abusive relationship and is written from a female perspective. Sobering song-in some ways compliments ‘Hollywood Hegemony’, the female experience of that kind of masculinity.

Isn’t it great when an album doesn’t peter out musically!? ‘Accessorise’ will have you looking for the ‘Rewind’ button! Ace guitar work on this-brilliant riffing! Where’s that button again…”

Last track up ‘Martial Island’ is brooding guitar work and foreboding drums as we are reminded of the destruction of an island network, the Marshall Islands, by US nuclear testing.

This album is a thing of excellence, musically inventive and diverse, lyrically insightful it superbly critiques dystopia-in-the-making Britain in the 21st Century while also taking time to recognise both (global) interconnections and the struggles of individuals trying to construct meaningful, positive selves in an impoverished cultural landscape.

Buy it! Go and see them!

* Referring to biology here not gender…and Yes I know, that is why I wrote ‘very roughly’…and Yes gender is a social construct that varies over time and space…and Yes Judith Butler would argue that our interpretation of biology through a two sex model is also a social construct.